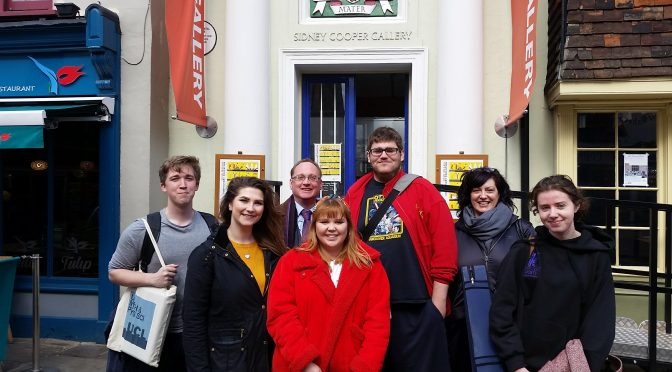 The Virtual Orchestra is currently ensconced in Canterbury, an immersive digital experience evoking the feeling of being a part of the Philharmonia as it performs Holst’s epic The Planets suite. The installation breaks the orchestra up into its various sections, and visitors can tour round a filmed performance to see and hear the physicality of performing. Several of us took the opportunity yesterday afternoon to escape from the pressure of looming academic deadlines and visit the exhibition, housed in the back of the Sidney Cooper Gallery on the high street, with the student players taking their instruments with them – the installation has mock orchestral desks set up around the various sections, with sheet music, allowing you to play alongside the performance.

Moving from bright afternoon sunlight into the sepulchral darkness of the exhibition, we walked around the different ‘rooms’ before each player set up in his or own own station; the Event Manager very kindly agreed to start the filmed performance from the beginning, and we were off… Each ‘room’ in the installation focuses both visually and aurally on the various orchestral sections – strings, woodwind, brass, percussion – with the orchestral sound weighted in order to favour the respective instruments.

Lit by the solitary LED stand-light and the glow from adjacent screens featuring the various orchestral musicians in action, it really is an immersive experience.

Members of the public visiting the installation also stopped to listen to the students playing; there was a lovely moment where a girl of about three or four was dancing along with the string-playing students, being filmed by her delighted parents!

“I really had an absolute blast,” said third-year Psychology student and violinist, Peter Coleman, “I can’t speak for anyone else but I myself was stuck in a deep, bottomless rut of essay-writing and referencing. Playing my way through Holst reminded me what it was like to truly enjoy something again (we don’t need to go into note-accuracy do we?). It also reminded me what an enormous amount of respect I have for that suite. I played ‘Mars,’ ‘Venus’ and ‘Jupiter’ in my community orchestra, and though it paled in comparison to the scale, colour and grandiosity of the Philharmonia, it taught me so much about how expressive and visual a piece of music can be. Though my playing was patchy at best, I do recall a buzz coming from onlookers who drifted in and out of our section, and there were a couple of people who liked us so much they didn’t leave.”

Over an hour later, we emerged back into the gallery having heroically sight-read our way through the entire suite, including Joby Talbot’s additional movement (there are, sadly, no photos of Your Loyal Correspondent, the Director of Music and the Music Administrator thoroughly enjoying themselves in the percussion room…). “It was really fun,” commented second-year violinist and viola-player, Jeni Martin, “and a great break from essay deadlines.”

We loved playing at the exhibition yesterday. And we giggled our way through a couple of the trickier passages..! Maddie Rigby, second-year Drama student and clarinettist

“As a trombonist,” reflected Rory Butcher, studying for a Masters in History,  “the first movement of Holst’s Planets Suite is one of those pieces that I’ve never been able to play in the right setting (i.e. as part of a full symphony orchestra). Well yesterday I got pretty close! It was amazing being able to play along with the “pros”, and to see the entire piece come together across the different sections. It was even more incredible being able to participate, even in a small way, so it was very gratifying to see some of the public enjoying our contributions!”

To have a chance to get the feeling that you were playing alongside musicians in such a fantastic orchestra is an opportunity that really shouldn’t be missed – David Curtiss, first-year Physics student and clarinettist

Our thanks to Event Manager, Carys, and assistant Tom for making us welcome, and well done to our own Guardians of the (musical) Galaxy for participating.