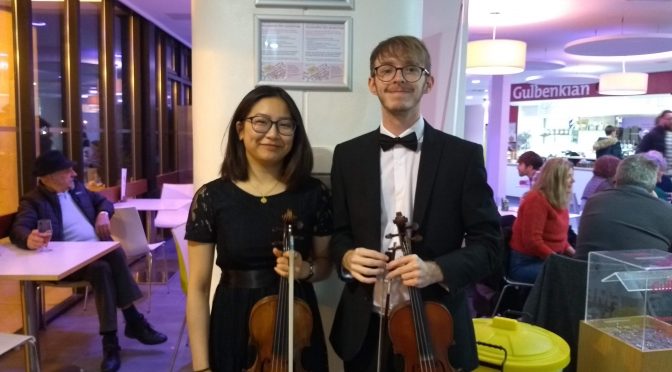 My parents were keen for me to learn an instrument, so I started piano lessons when I was 5 years old. A year later, seeing how much I was enjoying piano, my parents suggested I start another instrument. After trying out the violin and the cello I enthusiastically decided violin was the one for me. From then on music has always been a significant part of my life both at home and through school. I was fortunate enough to get into the Cathedral School in Peterborough which had a fantastic musical reputation which during my time there, they certainly lived up to. Over my years there I played with the orchestra, string orchestra and several smaller chamber groups. On the piano, I played hymns in assemblies, accompanied soloists and choirs and was given ample opportunity to perform as a soloist which helped me grow as a performer. In addition, I was introduced to choral music for the first time. The school also ran music tours every other year and I was lucky enough to perform in three of them; in Italy, France and Germany. These tours were some of the most defining experiences of my musical life for instance my first solo as a singer at Bayeux Cathedral, France. The other highlights of my musical ‘career’ to date also happened at school. Winning the Inter-House Music Competition was most certainly my high point. After a month of preparing an orchestra, junior choir, senior choir, band, finale and a host of soloists for the annual competition, all our efforts payed off on the night where my house (St. Oswalds) won overall!

After leaving school, I used my gap year to really focus on my music. I started teaching piano, violin and music theory to students in local schools. I joined local musical groups such as Stamford Chamber Orchestra and the St Peters Singers at Peterborough Cathedral. I also used my new-found time to finish off Grade 8 on the violin! At the University of Kent, I’ve been looking to continue gaining musical experience. I receive piano lessons from Matthew King, Professor of Composition at the Guildhall, and am planning to get involved in accompany other Music Scholars and playing in chamber music groups. I’m also having a great time as a member of the Symphony Orchestra, the String Sinfonia and the musical theatre band. I’ve particularly enjoyed being able to perform in the Colyer-Ferguson Hall and I’m also excited to be playing violin with the orchestra in a cathedral again soon.