I’m sitting in the café late on a dark winter afternoon, to talk with creative powerhouse, artist, actor and writer Adam De Ville about his Blue series, one of which is appearing on the cover of the programme for the concert in the Cathedral Crypt by the University Chamber Choir in March, for its performance of Pergolesi’s Stabat Mater. The music is a masterpiece of the Baroque period, a dramatic and vivid setting of the thirteenth-century hymn to the Virgin Mary’s suffering during Christ’s crucifixion; Adam’s painting (itself called simply ‘Blue’) plays with ambiguity, with uncertainty, with questions of identity, the unknown figure’s possible story and the implication of her suffering. 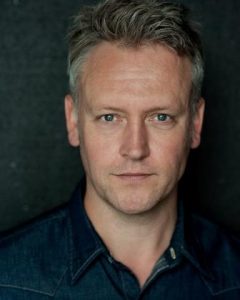 Sitting there with a shock of silvery hair giving him a distinguished aspect, his gaze direct, there’s a contradiction almost between the committed energy he has for art, his fierce creativity, and the carefully-paced, gently articulated way he talks about it; it’s as though each sentence is carefully weighed, measured for its value in articulating ideas which are important to him. No words are wasted; you are left with the sense that these things have been a long time in consideration, yet they flow readily into our free-wheeling conversation, as the sky outside darkens and the coffee sits forgotten amongst the papers.

Photographs of the Blue series are spread between us across the table-top as we talk. It was painted eighteen months ago, with two distinct aspects – one reflecting Adam’s passion for history, with two works referencing the fifteenth and seventeenth centuries, and the other his fascination with technology. ‘I love exploring technology; does it give us an identity ?’ he ponders. ‘I’m always thinking about how the elderly generation uses technology, and how young people engage with it; does it create gaps, or fill them ?’ He launches into a story about sitting in a restaurant recently, watching a young couple eating, talking with each other and at the same time conducting other conversations on their mobile phones; multi-tasking across different streams with complete ease. ‘I wonder how my own children will use technology in ten, twenty years’ time.’

‘A lot of my work is about looking back and imagining forwards, whilst also embracing the transitory nature of life. I paint to try and get home, to anchor myself in moments on paper.’ The striking sequence of images in the Blue series reflects his interest in the colours and tones buried within that single hue; it began during a three-week illness, during which he picked up a sketchbook and began to paint – but only in blue. I asked him about his focus on a single colour and what it meant. ‘I was thinking about age, about being at different stages of life; and, on some level, how we deal with ‘the blues,’ with depression.’ When painting, the images are usually done in a single sitting, although the preparation and thought-process preceding them takes considerably longer.

A recurrent theme in Adam’s work is the idea of belonging and loss. ‘I’m fascinated by the idea of coming home to a home that doesn’t really exist. Life is transitory; you set up a home, and an identity which disappears when you die.’ His paintings have titles like Memory of Bern or Plans for Birmingham, as though he’s trying to pin down on the paper something elusive, to capture that fleeting moment that exists either only in the memory or in a brief vision of what might be.

Adam’s musical interests include the hypnotic soundscapes of Arvo Pärt and Gavin Bryars; Pärt’s Cantus in memoriam Benjamin Britten formed the sonic backdrop whilst he was painting ‘Blue,’ and Bryars’ mesmerising The Sinking of the Titanic inspired ‘Preludes (where you go I go),’ a haunting sequence of images.

I ask him what he’s working on at the moment. ‘I’m exploding!’ he says, eyes alight with real relish; ‘long may it last!’ His newest images explore the urgent, street-art energies of graffiti; other paintings explore a more vibrant world of colours in various cityscapes – Paris, the Montmartre district, Birmingham’s brutalist architecture from the 70s; there are also paintings of Havana – all places connected with Adam’s life, fragments of his own history. Suddenly we’re transported from the darkness-bound neon glow of the café to Cuba, as he recounts a brilliant (and hilarious) story behind one of the Havana images, involving his acting in a commercial dressed as a pork-chop, a moment which sounds utterly surreal but which informs some of his most energetic painting.

For all his gently-weighted manner, it’s impossible not to be invigorated by Adam’s considerable enthusiasm for his subject, his looking at things from different angles, for making connections and exploring ideas. As we leave to go, each to his own home – after our conversation about identity, about belonging, I’m no longer quite sure what that may mean – a little of the neon glare seems to fade from the café as he ventures out into the dark; but it resides, fiercely, in the images still spread on the table in front of me.

Adam’s work is currently in exhibitions at Store Street Gallery, London, Lilford Gallery, Canterbury and Flux 2018 at the Chelsea College of Arts, London.

Blue will be exhibited in the Colyer-Fergusson Gallery from Friday 16 February to Friday 9 March, during normal opening hours: admission is free, and there is disabled access. The individual painting, ‘Blue,’ will be shown during the Chamber Choir’s Crypt Concert performance of Pergolesi’s Stabat Mater on Friday 2 March.