Continuing the series profiling this year’s crop of Music Scholars at the University. This week, soprano Kathryn Cox.

After an absolutely fantastic (and very jam-packed) first term at university, I’m excited to be back again. Just three weeks in to the new term and rehearsals for numerous concerts are already well underway. Last term involved numerous musical highlights including the first Chamber Choir concert, ‘Music for Advent’ which was a real success, with the choir collectively deciding to sing in a mixed formation! The sound was much more rounded and rich, and did not fall victim to the extensive repertoire. Other highlights included singing Finizi’s For St. Cecilia with the University Chorus and Orchestra, and not forgetting of course the University Carol Service in the Cathedral. The Carol Service demanded much multi-tasking; trying to sing whilst concentrating on not tripping on a floor- length dress or setting somebody’s hair on fire with your candle is a rather tall order. 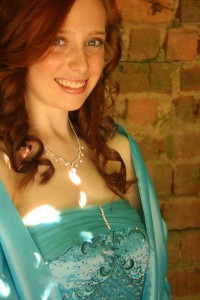 I feel I should write a small amount about my musical background, why I’m interested in music, and what I’m involved in musically with the university, so here goes: I have been engulfed with music throughout my upbringing and definitely ‘got the bug’ so to speak. Family friends jokily call my family the ‘Von Cox’s’…….. minus the mountains and the narrow escape, they’re not far off!. Alongside working towards ABRSM and LAMDA qualifications, I was a member of Taplow Youth Choir who won the title of ‘BBC Radio 3 Youth Choir of the Year’ in 2008. Being a part of such a dynamic and friendly choir was a real privilege, and involved singing in an international choral competition in Estonia, and singing ‘Elijah’ at the BBC Proms in 2011 with the Gabrielli Consort and singers.

Singing in Chorus, Chamber Choir and the Cecilian Choir is both challenging and rewarding. Being involved with music as well as reading a Joint Honours degree in Psychology and Law can be a large workload at times, but there’s no rest for the wicked!