Be My Guest: an occasional series of guest posts and contributions. This week, a review of the recent Brodsky Quartet concert at the Gulbenkian Theatre by Danielle Broadbent. Danielle is a second-year Architecture student, and Music Scholarship Student. She plays the cello in the University Symphony Orchestra, and has also set up some additional string groups. 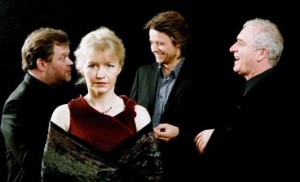 There was a good turn-out at the Brodsky Quartet concert at the Gulbenkian on Wednesday 19th May.

Many people come regularly to see the group play, so the audience knew to expect a good evening. There was a really friendly atmosphere with even a group of young people from St. Edmund’s School among the audience. It’s so easy to get to that I was surprised: for just £7 for a Student Stand-By ticket, you would have to pay a lot more to get such a professional performance any where else!

The quartet plays standing up which is unusual but works really well. It allows for lots of movement, which means that the group sometimes looks like they are dancing as they play. The four players dip and dive, showing the spark between them as they work together in a really strong team.  The first violinist is very expressive. His showy, tapping, style took him up to two metres away from the stand at times! Complimenting this is the unfussy, solid performance of the second violinist. The viola player is the spokesman of the group, introducing pieces with interesting facts and a few jokes. Beautifully interwoven with his approach is the elegant playing of the cellist. There is a definite sparkle within the group, as they use eye-contact and general movement to bring the music alive. Their playing is so well integrated that it sometimes feels like they are holding a musical conversation.

The first piece was Mozart’s Adagio and Fugue in C Minor (K546). We were told how Mozart took the examples of Bach and Handel and said ‘I can do better!’ The playing was crystal-clear with incredibly expressive playing from inside players. They made the most of the silences in the piece and looked like they had great fun playing the last movement.

The second piece was the Schumann Quartet in A Major, op. 41 no 3. 2010 is Schumann’s 200th birthday celebration year and last time the Brodskys came to the Gulbenkian earlier this year they also played his music. There was rapturous applause, and even cheers at the end of the piece!

After the interval, the concert continued with Tchaikovsky’s first quartet in D major.  This came complete with regulation coughs and shuffles between movements! The first movement was stirring, the second beautiful and the third fascinating, but the masterful, boisterous and playful rendition of the final movement was definitely my favourite part. The clever programming and showmanship of the performers worked the audience up so that the applause left no-one in any doubt that an encore was necessary!

This turned out to be the group’s own arrangement of a piano piece from Schumann’s Album for the Young. The tired but jubilant quartet settled the audience down with this lovely, quiet piece rounding up the concert in style.

The Brodsky Quartet in 2008, playing the Brahms Clarinet Quintet: