Earlier this year Special Collections & Archives hosted two student interns with the generous support of Kent’s Work-Study scheme. Becca and Emily worked on our James Friell collection from the British Cartoon Archive, helping to sort, repackage and list this large collection of cuttings and original artworks. In this second of two posts written by Becca and Emily, they give an overview of their time with us:

Hello! We are two interns, working with the Special Collections and Archives, as part of the Work-Study scheme.

I am Becca, a final year Classical and Archaeological Studies undergraduate student. Although my interests are mainly in a far earlier period than is covered by the Friell collection, I’ve found the cartoons both interesting, funny, and in some cases, still relevant – they clearly stand the test of time!

I am Emily, a final year History undergraduate student. The Friell collection has been fascinating to work with, largely my historical interests and expertise surrounds modern political history, as such the collection has helped me with my studies and vice versa.

The Friell collection primarily contains newspaper cartoon cuttings and original artwork of the late political cartoonist, James Friell, also known by his ​Daily Worker ​pen name, Gabriel. The University of Kent has one of the biggest cartoon archives in the UK and the pieces in their Friell collection easily numbers in the thousands. The collection also features personal items such as small biographies written by Friell himself, personal greetings cards sent to friends, and rough sketches. It’s fantastic to work with a collection as complete as this, where we can read about Friell’s life in and outside of cartoons, and see not only the published work, but the original concepts and artwork, too. 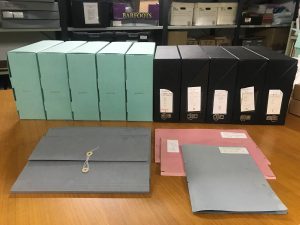 Before and after: the original folders and boxes for the cuttings are on the right, and the repackaged on the left.

Our first task with the collection was to sort through the thousands of cartoon clippings from both ​The Daily Worker ​and The Evening Standard. ​This involved date ordering the clippings and repackaging the collection to conservation grade standard. Our next task was to then research the original artwork in order to date the pieces, as well as cross referencing with the cartoon clippings we had previously worked with, to organise the artwork and make it accessible for readers.

What were the main challenges with working with this collection? 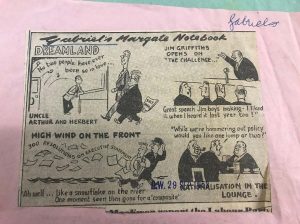 Newspaper cutting from the Friell collection

One of the biggest challenges of working with the Friell collection was also one of the best parts: it is completely uncatalogued and little work had been done on it until we began. Whilst this meant that we had a mammoth task of sorting the collection from scratch, it was also great to know that when we finished the project, we would’ve been responsible for sorting and caring for an entire collection from start to finish.

The biggest challenge came from working with the original artwork within the collection. Whereas with the cuttings, the date was often written on the cartoon or printed on the newspaper, the majority of the original artwork was both undated and in no discernable order – cartoons from ​The Daily Worker ​in 1948 mingled freely with those from 1957, where Friell had begun signing his work with his surname, rather than the familiar Gabriel. The only way we had to date these artworks was to search through the cuttings to find the corresponding date that the cartoon had been printed. When faced with thousands of cuttings and thousands of original artworks, you can forgive us if there were tears! Nevertheless, we powered on and in just a few weeks, had the majority of the original artwork listed, dated, and linked to their corresponding newspaper cutting.

What has been the best thing about working in Special Collections & Archives? 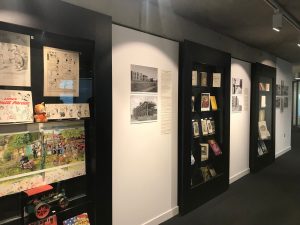 Our Templeman exhibition cases in the Templeman Gallery

We have loved the variety. Whilst caring for and sorting the Friell collection was our primary project, we had the opportunity to help install the Our Templeman exhibition in the Library’s Gallery space, including cases dedicated to the Maddison collection and David Drummond Pantomime collection. This not only taught us the practical handling and displaying skills necessary for exhibition work, but also gave us the opportunity to work with varied collections outside of Friell. 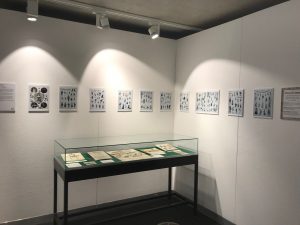 The whole experience has been fantastic, the Special Collections & Archives team are so lovely to work with and the feeling of completing a task the size of the Friell collection was amazing. Most of all, this internship has provided us with invaluable experience, which has meant that we both have either secured a place in further education or a graduate role within the archive sector, something that seemed unattainable without this role.

Earlier this year Special Collections & Archives hosted two student interns with the generous support of Kent’s Work-Study scheme. Becca and Emily worked on our James Friell collection from the British Cartoon Archive, helping to sort, repackage and list this large collection of cuttings and original artworks. In this first of two posts written by Becca and Emily, they give an overview of Friell’s life and work: 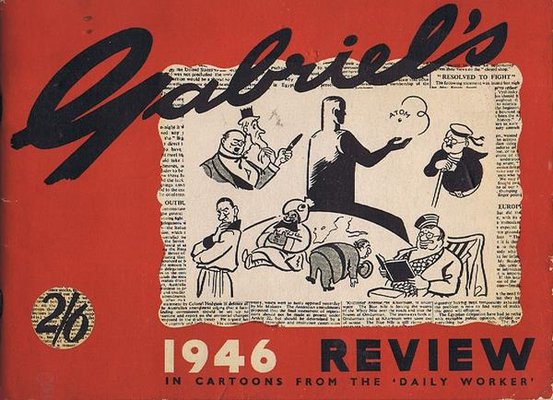 Cover of “Gabriel’s 1946 review in cartoons from the ‘Daily Worker'”, a compendium of his cartoons published that year.

James Friell (1912-1997), also known by Jimmy Friell, Gabriel, and Field, was a political cartoonist for various British newspapers and television programmes between 1936 and 1988. Born in 1912 in Glasgow to a large Irish Catholic family, Friell showed artistic talent from an early age. He was a bright boy who was offered a scholarship for an academy, which would have led to university, but his father made him turn it down in favour of work. He worked in a solicitor’s office, where he sold a few cartoons to Glaswegian and London newspapers, before pursuing a cartoonist career full-time.

Friell’s first position began in 1936 at The Daily Worker, a Communist party-owned weekly paper whose views fell in line with his own. Here, he took the pen name ‘Gabriel’, after the archangel, and joined the Communist party in 1937. During his time at the paper, Gabriel’s main targets were Churchill, Mussolini, and Hitler, with a good few jabs at the Labour and Tory parties. He was called up to the Royal Artillery during the Second World War but served his time in a factory, due to his known ties to the Communist party. He worked for The Daily Worker until 1956, leaving when he felt he could no longer work for a Communist paper who condemned the evils of capitalism whilst praising the “acknowledged evils” of Communism in Russia. 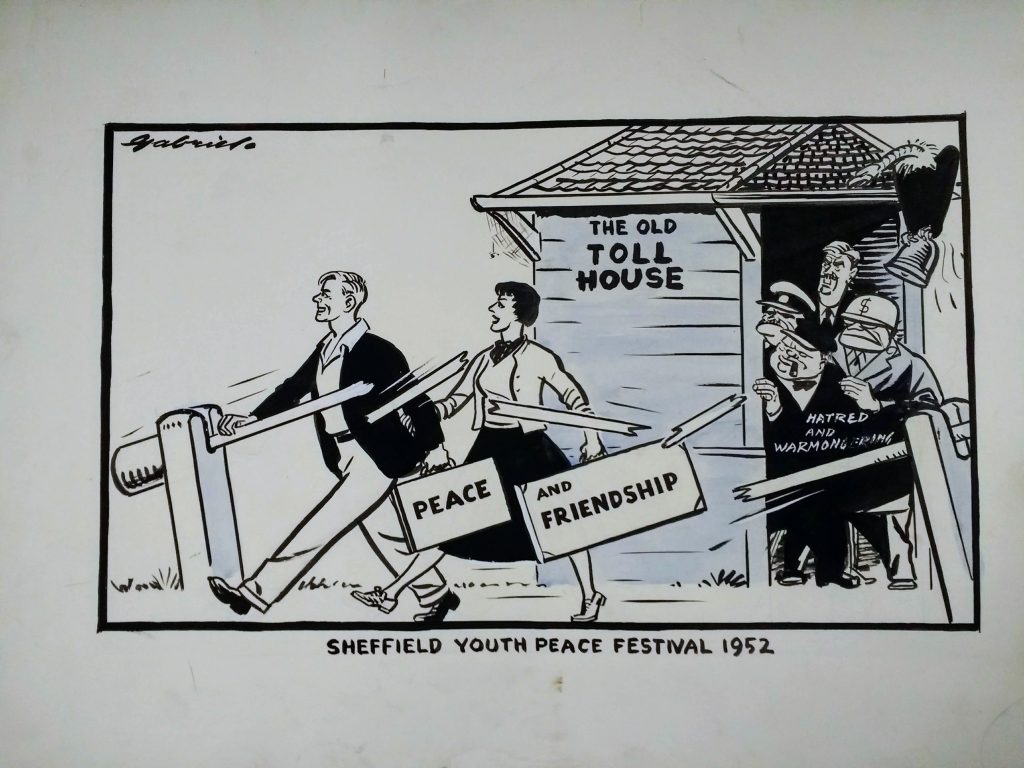 After a few months out of work, Friell took up a job with the Evening Standard, leaving his pen name Gabriel behind. He worked there for five and a half years, from 1956-1962, now signing his cartoons ‘Friell’. He left the Evening Standard after a new cartoonist was brought in, knowing that no other other paper would hire a hard-left cartoonist and being forced to take on several other pseudonyms to get work. He worked in television for a few years, winning the Bronze Award in 1983 for a television cartoon piece, before moving to his last position at The New Civil Engineer magazine in 1973.

James Friell was discovered by an American professor in 1986 after years of living in obscurity, leading to a History Today article, interviews deposited into the National Library of the Spoken Word, and several lectures for the Americans Social Historians group. He retired in 1988 and died in 1997, aged 84. The Friell collection in the University of Kent’s Special Collections & Archives is lucky to have a wide range of pieces surrounding the cartoonist – from newspaper cartoon cuttings and original artworks from his time at The Daily Worker and Evening Standard, to rough sketches and personal greetings cards. Our next blog post will detail our work with the collection, including some of the challenges that come with attempting to sort such a large and varied collection.