You can watch all three performances in the series on YouTube here.

Filmed in Colyer-Fergusson Hall on the Canterbury campus by KMTV.

The new Kent and Medway Medical School and the Music department are delighted to celebrate the award of the inaugural KMMS Music Performance Scholarship, which has been awarded to first-year international student, Michael Lam.

The first Scholarship of its kind for the new Medical School, the award is given in recognition of outstanding musical abilities which can be supported as part of an extra-curricular aspect of University life. Pianist Michael Lam, who comes from Canada, has been awarded the scholarship, which combines a cash award of £1,000 with a programme of instrumental lessons designed to encourage excellence and to support a student’s musical development alongside their academic studies. The University of Kent has a thriving extra-curricular musical provision, open to all students whatever they are studying, as well as to members of staff, alumni and the local community, with concerts and events throughout the academic year.

Head of Music Performance, Dan Harding, is delighted to welcome such an exciting pianist to the University community; “Michael’s audition was extraordinary; he played seven movements from the Anna Magdalena Notebook from memory with skill and craftsmanship, and showed himself to be a remarkable performer. Talking with Michael at interview, it became apparent that he is going to be able to make a very exciting contribution to University music-making, at a very high level of accomplishment, and we are looking forward to seeing him flourish during his time at Kent.”

Find out more about the new Medical School here, or about the extra-curricular Music Performance Scholarships here.

With thanks to KMTV. 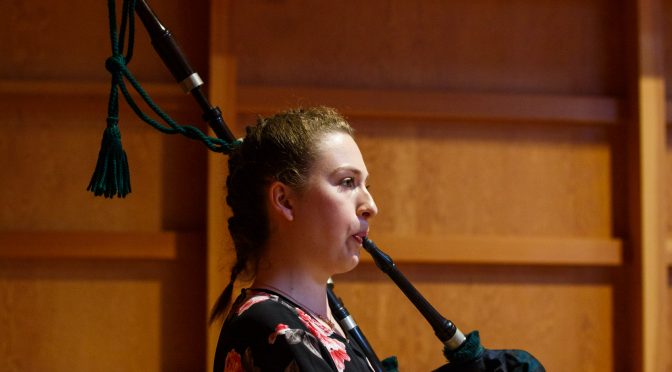 As part of her Music Performance Scholarship, first-year Biochemistry student and highland bagpiper, Eloise Jack, recently took part in a piping course at the National Piping Centre in Glasgow. Here, Eloise reflects on her experience.

Thanks to the music scholarship I received from the University, I was able to attend an intensive piping course from the 24th-28th of June at The National Piping Centre in Glasgow. Each day consisted of three one-to-one sessions, with time between the lessons to practice in one of the centre’s practice rooms. Throughout the week I had lessons with four different instructors, covering different styles and playing techniques, and also tuning the pipes and general maintenance.

In the first lesson I set my goals for the week with Finlay MacDonald, head of piping studies at the National Piping Centre. These included: –
• Expanding my musical repertoire and learning new styles of tunes.
• Learning the correct technique to tune my bagpipes myself, by ear (Usually someone else tunes my pipes for me using an electronic tuner.)
• Developing my embellishment techniques and overall piping technique.
Each further lesson was different and tailored to my needs, and depending on what instructor I had depended on what we worked on in the lessons.

I usually play marching tunes as I play with a marching band, however I wanted to expand my solo music repertoire. During the course, I was introduced to and started learning music in four different styles, including a jig, a reel, a strathspey and a four-part 2/4 march.

Tuning my pipes by ear was something that I was very keen to learn, as I normally have to rely on someone else to tune them for me. It is a difficult technique to master because you have to keep a steady pressure whilst trying to tune the drones so that the reeds in the drones and in the chanter vibrate steadily.

In completing this course, I managed to achieve all the goals I initially set. I also completed some much-needed maintenance on my pipes which was an unexpected expense, but the results in terms of the sound I can now achieve made it well worth it. They not only sound better when played, but the adjustments make it easier for me to practice tuning as make it easier to hear when they are in tune. I really enjoyed the course. Being able to focus on just bagpiping really helped and I would definitely attend another intensive course in the future so that I can continue to develop my overall technique and repertoire.