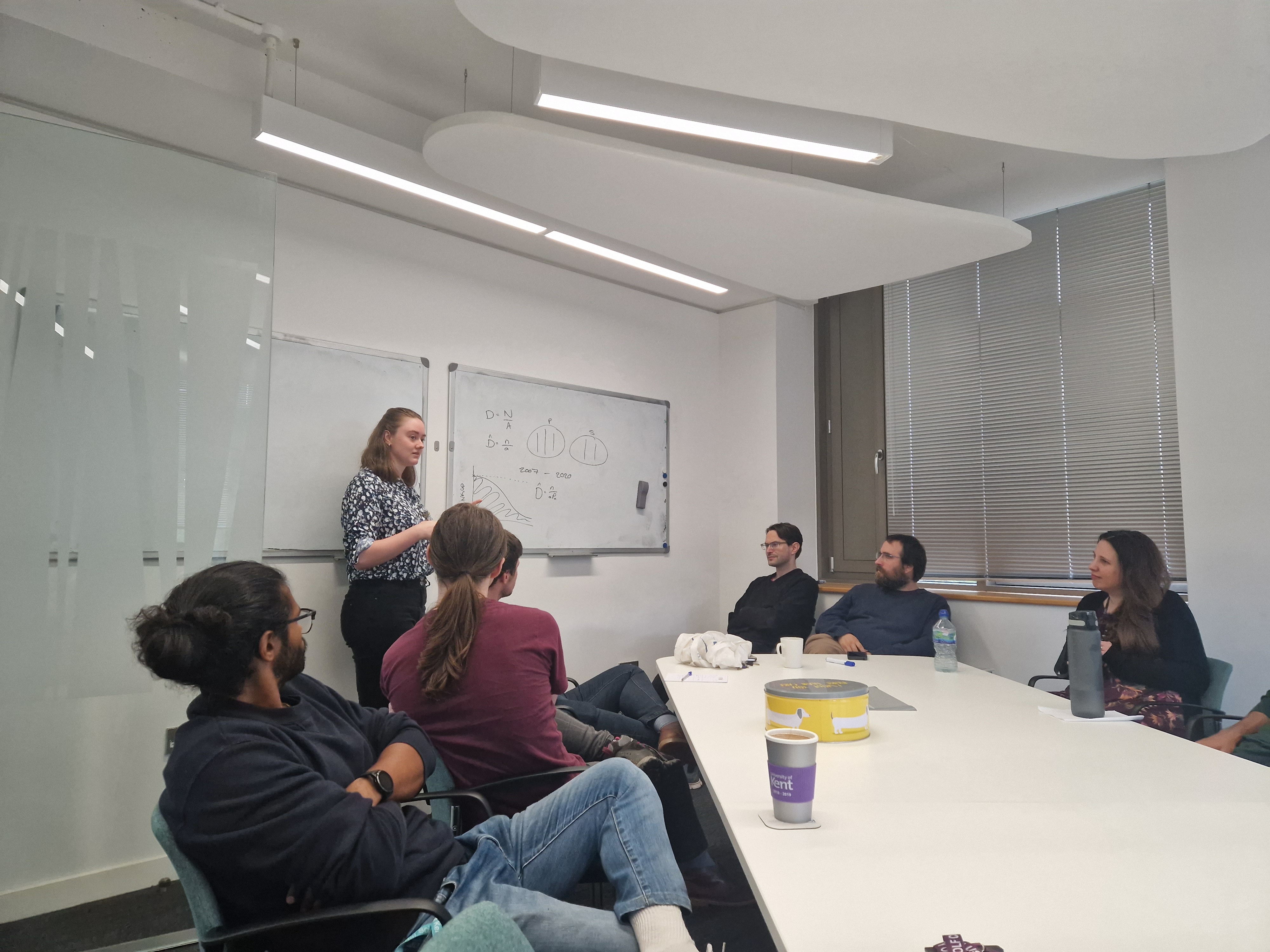 Welcome to new PhD student Milly Jones who is supervised by Diana Cole and Eleni Matechou.

She is working with data collected by Madagascar Fauna and Flora Group (MFG), investigating the biodiversity in Madagascar. She will develop multi-species temporal models for the distance data collected. Picture shows Milly at the board explaining her PhD project to the SE@K group during our Thursday lunch time meetings.

The workshop, in Montpellier, France, was organised by Matt Silk and Olivier Gimenez and was attended by around 12 experts in statistical models for ecological data and in network modelling. The R package is available at: https://github.com/calliste-fagard-jenkin/rGAI

Members of SE@K group attended ISEC from 27th June to 1st July. Some went to South Africa to attend in person others attended virtually.

Alex gave a talk on A unifying modelling framework for metabarcoding data.

James’ presentation was on Accounting for varying spatial scales in the production of UK butterfly abundance estimates.

Fay presented work on Assessing the success of reintroductions whilst accounting for multispecies populations.

It is our sad duty to let you know of the death of Philip North, who died on the 4th June 2021, aged 72.  Philip made a huge contribution to the development of the EURING Analytical Meetings, acting as editor of the first five proceedings.

He obtained his PhD on Statistical methods in ornithology from the University of Kent in 1979.   This involved the development of novel analyses of various BTO datasets, in particular devising a method of cluster analysis to determine bird territories and enhancing various aspects of survival estimation. His influential 1978 paper in Biometrics used a variety of methods, including logistic regression and point process modelling, to investigate the effects of weather on the survival of grey herons. In addition, through his enthusiasm and research highly productive links were established between the Universities of Kent and St Andrews and with the Centre d’Ecologie Fontionnelle & Evolutive, CNRS Montpellier, which, together with the BTO are continued by the current members of the Statistical Ecology at Kent research group.

Philip was an expert ornithologist and a keen birder.  For example, we recall that he was one of a small number of observers who recorded the first sighting of a pallid swift in Britain and Ireland Thus he was well placed to understand both the statistical and ecological aspects of avian ecology. This combination of ornithology and statistical modeling made him an ideal contributor to the EURING Analytical Conferences, as did his role as secretary of the Mathematical Ecology Group of the British Region of the Biometric Society and the British Ecological Society.

Innovative discussions and published proceedings became key features of these EURING meetings. The first two were held in Wageningen in 1986 and at Sempach in 1989 and Philip edited the resulting proceedings single-handed, as well as jointly editing the proceedings of the meetings held in Montpellier (1992), Patuxent (1994) and Norwich (1997; see https://euring.org/meetings/analytical-meetings/analytical-meeting-proceedings ) . This was an important and sustained contribution, which appreciably advanced the theory and application of relevant aspects of statistical ecology, with wide application to both theoretical and applied problems.  It also showed how data gathered by the bird ringing/banding schemes coordinated through EURING could be collected and analyzed in ways that enhanced their ecological value. It is particularly noticeable how the content of the conference papers evolved over Philip’s period as editor. The first meeting focused on the use of individual datasets to estimate specific parameters, mainly survival. By the 1997 meeting there was greater interest in model selection and applied studies, with the first signs of the developments in data integration that would follow over the next 20 years.

Philip’s wife Monica died in 2008. They are survived by their children, Robin, Geoffrey and Melissa to whom we extend our deep condolences. 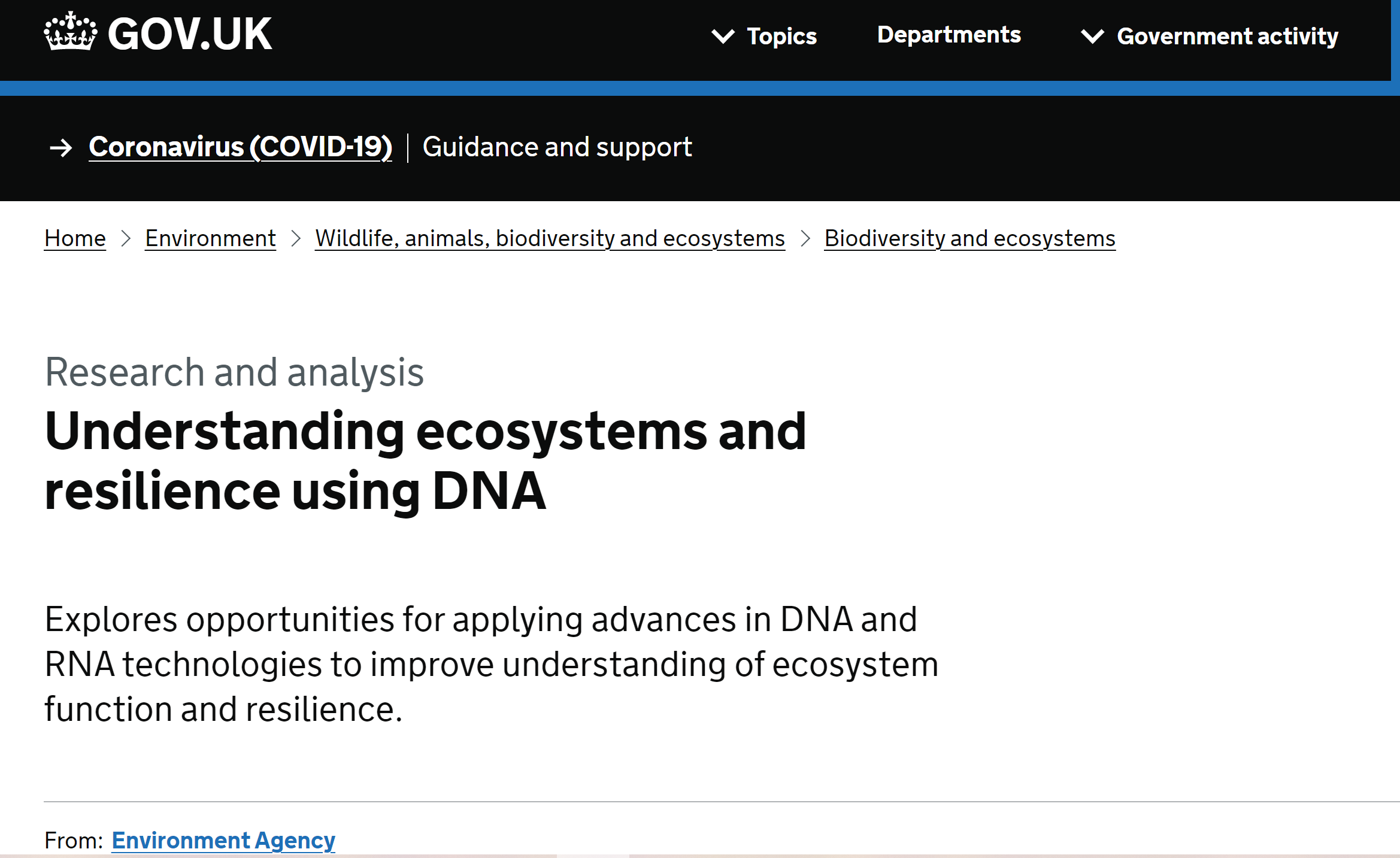 The Think Piece, titled “Understanding ecosystems and resilience using DNA“, explores opportunities for applying advances in DNA and RNA technologies to improve understanding of ecosystem function and resilience. Eleni’s contribution in particular, written together with Doug Yu, UEA, looks at “The contribution of DNA-based methods to achieving socio-ecological resilience”.

Diana is co-author on the paper: A guide to state–space modeling of ecological time series, which was published in Ecological Monographs.

Abstract: State–space models (SSMs) are an important modeling framework for analyzing ecological time series. These hierarchical models are commonly used to model population dynamics, animal movement, and capture–recapture data, and are now increasingly being used to model other ecological processes. SSMs are popular because they are flexible and they model the natural variation in ecological processes separately from observation error. Their flexibility allows ecologists to model continuous, count, binary, and categorical data with linear or nonlinear processes that evolve in discrete or continuous time. Modeling the two sources of stochasticity separately allows researchers to differentiate between biological variation and imprecision in the sampling methodology, and generally provides better estimates of the ecological quantities of interest than if only one source of stochasticity is directly modeled. Since the introduction of SSMs, a broad range of fitting procedures have been proposed. However, the variety and complexity of these procedures can limit the ability of ecologists to formulate and fit their own SSMs. We provide the knowledge for ecologists to create SSMs that are robust to common, and often hidden, estimation problems, and the model selection and validation tools that can help them assess how well their models fit their data. We present a review of SSMs that will provide a strong foundation to ecologists interested in learning about SSMs, introduce new tools to veteran SSM users, and highlight promising research directions for statisticians interested in ecological applications. The review is accompanied by an in-depth tutorial that demonstrates how SSMs can be fitted and validated in R. Together, the review and tutorial present an introduction to SSMs that will help ecologists to formulate, fit, and validate their models.

SE@K members Oscar and Rachel have published a paper reviewing the current state-of-the-art in modelling removal data. This work is part of the the EPSRC project EP/S020470/1 “Modelling removal and re-introduction data for improved conservation”.

The paper is available in full here: https://journals.plos.org/plosone/article/authors?id=10.1371/journal.pone.0229965

Removal models were proposed over 80 years ago as a tool to estimate unknown population size. More recently, they are used as an effective tool for management actions for the control of non desirable species, or for the evaluation of translocation management actions. Although the models have evolved over time, in essence, the protocol for data collection has remained similar: at each sampling occasion attempts are made to capture and remove individuals from the study area. Within this paper we review the literature of removal modelling and highlight the methodological developments for the analysis of removal data, in order to provide a unified resource for ecologists wishing to implement these approaches. Models for removal data have developed to better accommodate important features of the data and we discuss the shift in the required assumptions for the implementation of the models. The relative simplicity of this type of data and associated models mean that the method remains attractive and we discuss the potential future role of this technique. 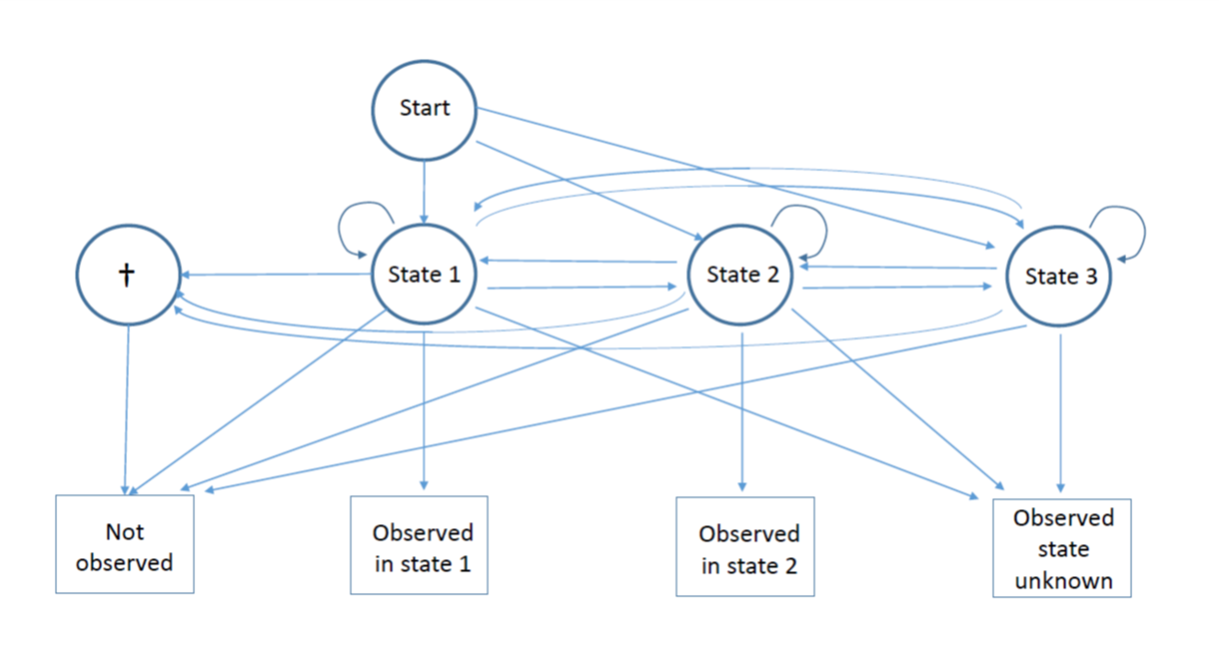 Former SE@K PhD student Anita Jeyam, Rachel and Roger Pradel (Montpellier) have had a paper published presenting a new test for determining the underlying state structure of Hidden Markov models.  This is an exciting piece of work which provides the foundation for addressing a complex topic for general HMMs.

Hidden Markov models (HMMs) are being widely used in the field of ecological modeling,
however determining the number of underlying states in an HMM remains a challenge.
Here we examine a special case of capture-recapture models for open populations,
where some animals are observed but it is not possible to ascertain their state (partial
observations), whilst the other animals’ states are assigned without error (complete
observations). We propose a mixture test of the underlying state structure generating
the partial observations, which assesses whether they are compatible with the set of
states observed in the complete observations. We demonstrate the good performance
of the test using simulation and through application to a data set of Canada Geese.

Rachel McCrea and co-authors from St Andrews and Edinburgh have published a paper on modelling the recruitment process of gray seals.

Modeling Recruitment of Birth Cohorts to the Breeding Population: A Hidden Markov Approach

Long-term capture-recapture studies provide an opportunity to investigate the population dynamics of long-lived species through individual maturation and adulthood and/or
time. We consider capture-recapture data collected on cohorts of female gray seals
(Halichoerus grypus) born during the 1990s and later observed breeding on the Isle
of May, Firth of Forth, Scotland. Female gray seals can live for 30+ years but display
individual variability in their maturation rates and so recruit into the breeding population
across a range of ages. Understanding the partially hidden process by which individuals
transition from immature to breeding members, and in particular the identification of
any changes to this process through time, are important for understanding the factors
affecting the population dynamics of this species. Age-structured capture-recapture
models can explicitly relate recruitment, and other demographic parameters of interest,
to the age of individuals and/or time. To account for the monitoring of the seals from
several birth cohorts we consider an age-structured model that incorporates a specific
cohort-structure. Within this model we focus on the estimation of the distribution of
the age of recruitment to the breeding population at this colony. Understanding this
recruitment process, and identifying any changes or trends in this process, will offer
insight into individual year effects and give a more realistic recruitment profile for the
current UK gray seal population model. The use of the hidden Markov model provides an
intuitive framework following the evolution of the true underlying states of the individuals.
The model breaks down the different processes of the system: recruitment into the
breeding population; survival; and the associated observation process. This model
specification results in an explicit and compact expression for the model with associated
efficiency in model fitting. Further, this framework naturally leads to extensions to more
complex models, for example the separation of first-time from return breeders, through
relatively simple changes to the mathematical structure of the model.