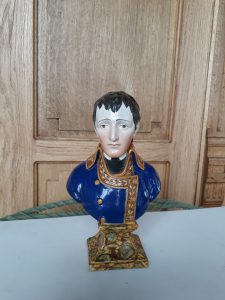 This ceramic bust of Napoleon was made in Staffordshire, most likely in the Staffordshire Potteries that now comprise the city of Stoke-on-Trent. The bust is made of pearlware, and the design appears to have derived from a standard template – other examples exist comprising the same tunic detail and portraiture, but with a red tunic rather than blue. The piece pictured is held by the Bowes Museum, and its estimated manufacture date is cited as 1805-1810.

This is particularly interesting, as this dating would imply that it was made after the resumption of the Napoleonic Wars in 1803, and therefore that, despite this, ceramics producers in Staffordshire still had enough demand to make busts of the nation’s chief enemy! Fear of invasion by Napoleonic forces gripped much of Britain after the breakdown of the Treaty of Amiens in May 1803; in Britain, as across much of Europe, the pre-existing notion of Napoleon as being Satanic, either the Devil incarnate or the son of Satan, gained new vigour once war broke out again. For many in Britain, Napoleon was the sworn enemy, and had been since his appointment as First Consul in 1799 as a product of a revolution that had dispensed with the ‘proper’ forms of constitutional monarchy. However, for some Bonaparte was a fascinating character, and a man to be venerated rather than castigated. Perhaps it is this market that the bust was intended for.

In October 1801, Britain and France announced the Treaty of London, a prelude to a formal peace. In March 1802, the Treaty of Amiens was signed, a declaration of peace that would last until May 1803. During this cessation of hostilities, British tourists were a constant presence in France. For many visitors to France Napoleon was the main attraction, and British tourists could be found waiting to see him at public events where he was known to be in attendance. In Britain itself, positive views of Napoleon could be easily found in published sources, including within the pages of government newspapers. Tourist trips to France and flattering press of Napoleon naturally declined sharply once hostilities resumed in May 1803, but they created the conditions in which this bust was produced. If the bust does date to 1805-10, it suggests that the demand for objects such as this outlasted the resumption of war, and perhaps that acclimation for Napoleon was not restricted to the period of peace among certain sections of the British public. After his final defeat in 1815, souvenirs of Napoleon were commonplace in Britain – perhaps production simply continued throughout the Napoleonic Wars and helped fuel this post-war boon.

Did you know?
Napoleon wrote a novella entitled Clisson et Eugénie in 1795, a fictionalised account of his relationship with Désirée Clary, to whom he was engaged in the same year before breaking it off after becoming involved with Joséphine. Désirée Clary would subsequently become Queen of Sweden and Norway due to her marriage to Jean Bernadotte, who became Charles XIV John of Norway and Sweden in 1818.