This article will be the first in a series on ‘Revolutionary Figures’. Every month this series will discuss a new individual from the Age of Revolutions whose ideas, or actions, changed the world. These articles will provide a brief chronology of the lives of their subjects, along with an outline of just what made them revolutionary. This month’s ‘Revolutionary Figure’ is Napoleon Bonaparte. Napoleon was the obvious choice to act as the subject of the premier article, as the Age of Revolutions project began its life as Waterloo 200, a commemoration of the 200 year anniversary of his final battle. Furthermore Napoleon’s prescence is felt throughout the Age of Revolutions. His actions shaped both the legacy of the French Revolution which preceded, and enabled, his rule and also influenced the establishment of the new order after his fall. 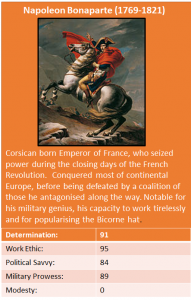 Napoleon divides historians, what precisely he represents is deeply ambiguous and his political character is the subject of heated controversy. There are many who would argue that he was not, in fact, revolutionary at all. Eric Hobsbawm, a notable Marxist historian, argues that ‘Most-perhaps all- of his ideas were anticipated by the Revolution’ and that Napoleon’s sole legacy was to twist the ideals of the French Revolution, and make them ‘more conservative, hierarchical and authoritarian’ (1). This contrasts deeply with the view William Doyle holds of him. Doyle describes Bonaparte as ‘the Revolution incarnate’ and sees Bonaparte’s humbling of Europe’s other powers, the ‘Ancien Regimes’, as a necessary precondition for the birth of the modern world (2). Whatever one thinks of Napoleon’s character, his sharp intellect is difficult to deny. Even Paul Schroeder, one of Napoleon’s most scathing critics, who condemns his conduct of foreign policy as a ‘criminal enterprise’ does not deny Napoleon’s intellect. Schroder concludes that Bonaparte ‘had an extraordinary capacity for planning, decision making, memory, work, mastery of detail and leadership’ (3).  The question of whether Napoleon used his genius for the betterment or the detriment of the world, is the heart of the debate which surrounds him.

Napoleon was born on the island of Corsica, not in France, on the 11th August 1769. The year of Napoleon’s birth was a turbulent time for his Mediterranean home, as it was the same year that Corsica came under French occupation. The second of eight siblings, it would have been typical for Napoleon to receive a clerical education whilst Joseph, his older brother, would have been trained as a soldier. Joseph, however, was ill-suited for a military career, but was soft spoken and good natured making him an ideal priest. Napoleon, in contrast, even in his youth, possessed a stubborn and commanding temperament which his family felt made him ideal for a military education. At the age of 9, Napoleon left Corsica and travelled to the French mainland to receive his education. He studied first at the military academy Brienne and then went on to the prestigious École Militaire, literally translated as ‘Military School’, where he trained as an artillery officer.  Napoleon’s school years were not happy.  He had great difficulty making friends, as he possessed a thick Corsican accent, for which the other children mocked him. Bonaparte spent much of his education holding Corsican nationalistic sentiments. He firmly identified as Corsican, rather than French, and dreamed of someday liberating his homeland from the yoke of occupation. In his spare time, Napoleon wrote a book on Corsican history, of which he was immensely proud. He sent this book to Pasquale Paoli, a famous Corsican freedom fighter and one of Bonaparte’s boyhood idols. When Paoli dismissed his work, Napoleon’s attitude both towards Paoli and to his birthplace soured.  The Revolution also caused him to view France in a more favourable light and at some stage in his youth, though historians are divided as to precisely when, Napoleon transitioned from identifying as a Corsican to a Frenchman.

Upon graduating, Napoleon was first deployed in Toulon in 1793. Toulon was a French port city, whose population retained royalist sympathies and did not support the Revolution. As such Toulon surrendered itself to British occupation.  Napoleon played a part in besieging the city and returning it to French control. He later served as a republican general, leading the Italian Campaign of 1796-1797 and embarking upon a military expedition to Egypt between 1798 and 1799. Upon his return from Egypt, with the assistance of several co-conspirators, he overthrew the French government and seized power.  From November 1799 Napoleon ruled France as the ‘First Consul’, a title which served as an homage to Ancient Rome. Like Caesar before him, Napoleon eventually transitioned from Consul to Emperor. His coronation occurred on the 2nd December 1804. Napoleon invited Pope Pius VII to the ceremony, but famously crowned himself, rather than allowing the Pope to do so. Though largely symbolic, this act demonstrates the secular nature of Napoleon’s authority, and how his legitimacy was derived from his merit and ambition, rather than from God or tradition.

During his reign, Napoleon led France’s armies across Europe and won several significant victories. The most famous being the Battle of Austerlitz, which occurred in December 1805, a year after the Imperial coronation. Known as ‘the Battle of Three Emperors’ the Napoleonic Grand Armée triumphed over a numerically superior force of Austrian troops, led by their Emperor Francis II, and Russians soldiers, led by Tsar Alexander I. Napoleon’s continued military triumphs had significant political ramifications, and allowed him to dramatically reshape the map of Europe to better suit his needs. He unified the divided states of Northern Italy into a single kingdom and dismantled the Holy Roman Empire, Europe’s oldest political institution, which had existed since the 9th century AD.

Napoleon continued to enjoy a string of almost uninterrupted victories, until he invaded Russian in 1812. Though initially successful, with the French advancing all the way to Moscow, Napoleon’s efforts to subdue Russia ultimately ended in failure. The Tsar acting from Saint Petersburg, which was at that time Russia’s capital, refused to capitulate. Napoleon was thus forced by a lack of supplies and the bitterness of the Russian winter to withdraw. The retreat from Moscow was a bitter experience for the Grand Armée, tens of thousands of troops succumbed to starvation, disease or harassment by Cossacks. Many soldiers simply deserted and began new lives in Russia.

Defeat in Russia destroyed Napoleon’s reputation as an indomitable military mastermind. No longer intimidated by him, all of the major powers of Europe united against the French emperor and defeated him at Leipzig in an event known as ‘the battle of the Nations’ in October 1813. After Leipzig, Napoleon’s fate was sealed and the other European powers pressed the attack on France itself, ultimately seizing Paris in March 1814. Napoleon was forced into exile on the isle of Elba just off the coast of Italy, and adjacent to his childhood homeland of Corsica. Even exile was not enough to dampen Napoleon’s ambitions, however, as he returned to France once more in March 1815 and seized his throne back from Louis XVIII who had been appointed by the victorious allies to replace him.  This return would be short lived, however, lasting just over 100 days, before he was defeated at Waterloo and deposed once more. Napoleon was exiled again, however this time he was sent significantly further away, so that a second attempt to reclaim the throne would be impossible. He was settled on Saint Helena, a small island in the South Atlantic.  Napoleon spent the rest of his days there, grumbling impotently about the power he once possessed and working on his memoirs. He died on the 5th May 1821 at the age of 51.

At its height, the Napoleonic Empire stretched from the Iberian Peninsula to Moscow, yet its existence was short lived and it came crashing down after barely a decade. For all of its brevity, Napoleonic rule left a permanent mark on the imperial territories. Napoleon massively increased the efficiency and effectiveness of the Bureaucracy of practically every area he governed, and the Napoleonic code remains the basis of the legal system of continental Europe today. The code also repealed Anti-Semitic legislation and secularised legal proceedings. Napoleonic administrators created constitutions which survived the empire’s fall and established the rights of those they governed as ‘citizens’ rather than ‘subjects’. The privileged previously afforded to nobles was also stripped away, in many areas, and positions of influence were awarded based upon ability rather than birthright.  Not all of the changes brought about by Napoleon’s rule were positive however. Though not his only objective, the primary purpose of Napoleon’s continued Imperial expansion was to draw upon new sources of revenue to tax and new soldiers to fill the ranks of the Grand Armée. The Grand Armée was not merely composed of Frenchmen.  People of myriad nationalities, including Italians, Germans, Poles and Lithuanians were conscripted and sent out to fight in the almost constant cycle of wars which characterised the Napoleonic period.  The Napoleonic systems unprecedented ability to draw upon manpower was later emulated by other nations, making possible the immense scale of the twentieth century’s two World Wars.

Napoleon’s influence was not merely confined to Europe. Sudhir Hazareesingh notes how he became a ‘legend’ amongst Native American tribes, ‘where his exploits were blended into folklore (4). He was also seen as a role model by Cubans during their struggle for independence from Spanish Imperialism later in the nineteenth century. Napoleon’s Egyptian campaign resulted in the discovery of the Rosetta Stone, which significantly increased the world’s understanding of Ancient Egypt, though there remains controversy over the fact that the stone remains in Europe, rather than being returned to Egypt.

The value which Napoleon represents above all else is order. Even if he did not inherit the democratic spirit of the Revolution, he took from it a firm belief that states should be governed in a logical and efficient manner, free from arbitrary privilege. He turned the French Revolution from a national event, into an international one, though he did so through the medium of military conquest.  His destruction of the Holy Roman Empire enabled German unification in 1871 and broke apart an archaic entity which had long stagnated political development in central Europe.  The defeats Bonaparte inflicted upon other European powers also forced them to adapt, and to copy his administrative innovations. Due to the impact he, and the legal code he created, had upon the world, it becomes hard to deny that Napoleon is a Revolutionary figure. The question becomes whether spreading progress through military means, is ultimately progressive or regressive.

(2) William Doyle, France and the age of revolution regimes old and new from Louis XIV to Napoleon Bonaparte, (2013) p.191