The trip to Waterloo proved to be an educationally and socially enriching experience. As a first year at the University of Kent, the trip was so much better than anything I had experience formally in education. Over the course of the four days we visited a total of six museums, each with their own appeal and important insight on history. The majority of these were to do with the battle of Waterloo, which is hardly surprising given that we were staying in Waterloo, but I think what may have surprised me the most was the fact that even though they were focused on the same battle, each museum still managed to provide new information or provide the information in such a way that they were still interesting and informative. By far the most fascinating of these exhibits to myself was the presentation provided to us at Hougoumont farm. With two large screens, each carved to represent either the British or French cavalry charge, the museum managed to create more than just a simple presentation and produced an engaging and visually pleasing display that certainly will not be leaving my mind any time soon. Another eye opening and particularly notable experience on the trip was climbing to the top of the Butte du Lion. After almost dying from doing more physical activity I think I’ve done since I was five by climbing up the stairs, the view at the top proved to be worth it. From the statue, one could see out into the fields in which one of the most famous battles in British History took place. I felt this experience was even more complimented by the fact we had Dr. Tim Bowman’s lecture the evening before giving us a rundown of the battle. Each of the museums were fantastic and if I had to recommend a visit to Waterloo to any student, lecturer or just anyone interested in the field in history, I certainly would. 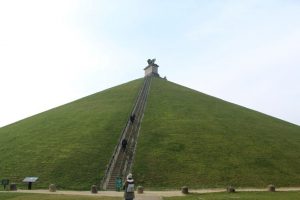 However, the educational side of the trip was not the only reason it was fantastic for me. Being a first year I had never really had contact with many students studying history that were second or third years. The trip proved to connect me to both students that were more experienced than myself and students that certainly were more knowledgeable. This led to a plethora of fascinating discussions on all that is history as well as any topics of interest I actually have (which are far too nerdy to include on this blog) and even led to me making quite a close friend as a result. Furthermore, as well as meeting generally interesting people, it also helped me to decide what to do next year and resulted in me receiving a lot of tips on how to write essays.

Overall the experience at Waterloo was one I will certainly not forget any time soon. It not only gave myself and the other students that I have spoken to since an insight into the horrors and historical significance of the Battle of Waterloo and the Napoleonic Wars as a whole, it was a lovely experience and gave the students and lecturers involved in the Age of Revolution project a chance to bond. I immensely enjoyed the trip and am looking forward to working with and for the Age of Revolution project in the future.