The Queen’s Own Buffs, The Royal Kent Regiment Collection was given to the University of Kent by the Regimental Association of The Queen’s Own Buffs in 2017, and is cared for as part of Special Collections & Archives. It consists of mainly printed and published material from the 19th century to the present, along with some archival material. 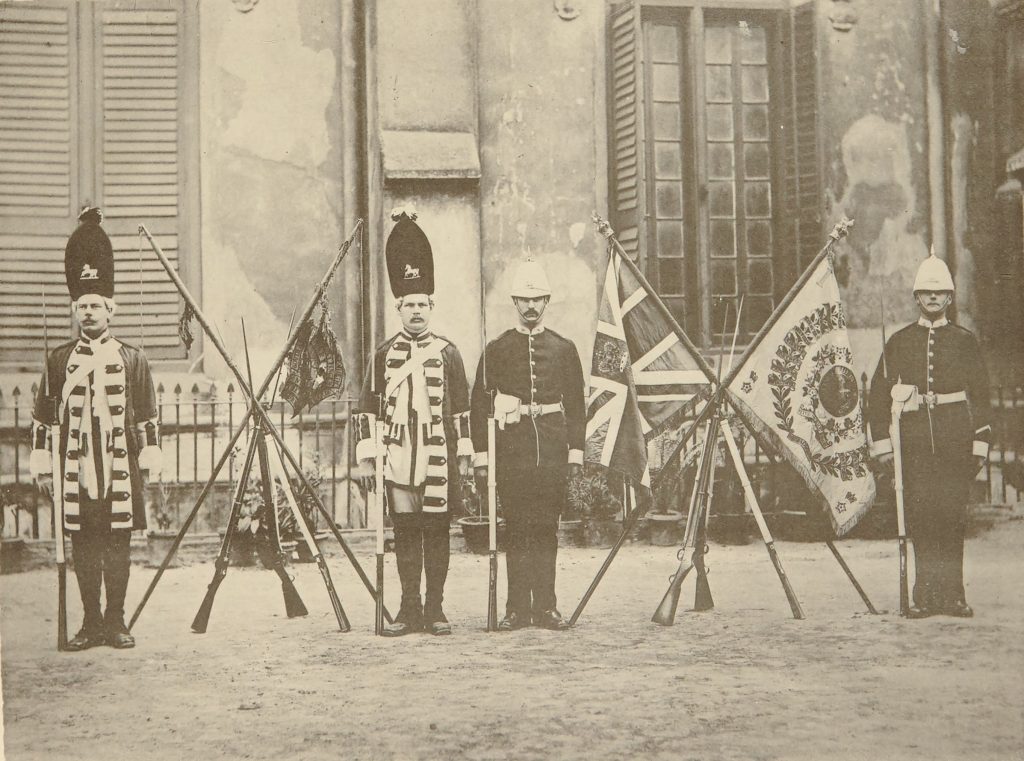 New and Old Colours of the 1st Battalion, The Buffs, from The Dragon March 1892

Over the past year we have undertake a year-long project, funded by the Regimental Association of the Queen’s Own Buffs Royal Kent Regiment, to catalogue the Collection and selectively digitise some of the regimental journals held in the Collection.

To celebrate this project we are launching a new exhibition in the Templeman Gallery, ‘Kent, its Regiments, and the First World War’, and Professor Mark Connelly will give a lecture entitled ‘The East Kent Regiment, Canterbury and the Great War’ to launch the exhibition at 2.30pm on Monday 29th October 2018. The talk will explore the links between Canterbury and the Buffs during the First World War. It will show how the city and surrounding region maintained a great interest in the actions of its local regiment, even after conscription led to great changes in its demographic. Home and Fighting fronts are often thought of as very distinct and separate entities, but this lecture will highlight the degree to which they were inextricably linked and that communication between the two was continual. This lecture is open to all, with tickets bookable via eventbrite. Attendees are welcome to visit the exhibition afterwards, which is held in the Templeman Gallery and will be running from 29 October 2018 to 4 January 2019. 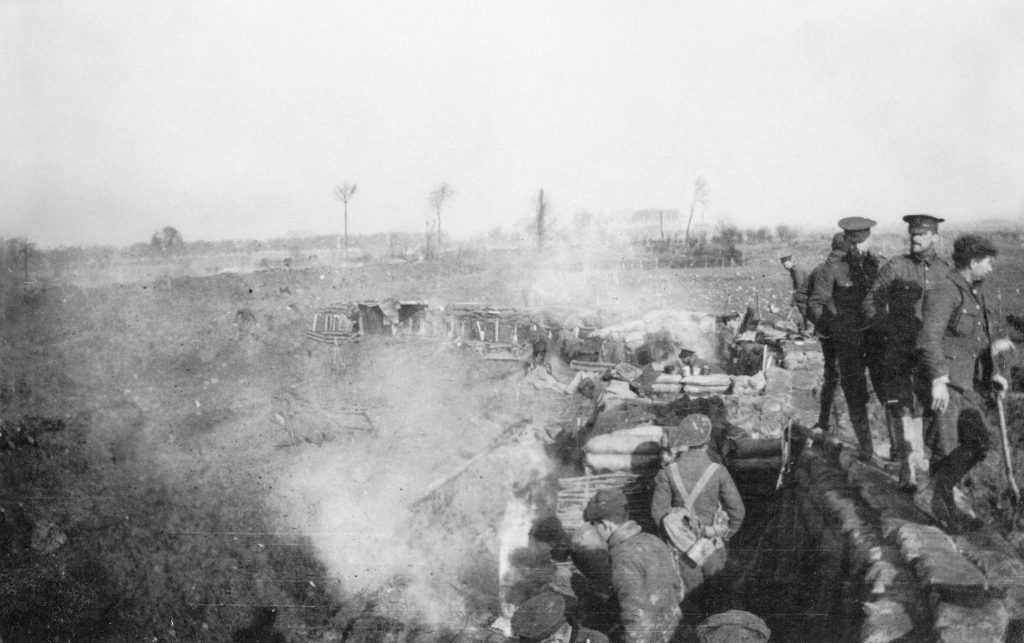 Men of the 1st Battalion, The Buffs at Bois-Grenier, winter 1914

During this event, we will also be launching our new project ‘Diaries of the Here and Now‘, where we are inviting everyone to record their experiences of 11 November 2018 for future generations, and deposit their diary with Special Collections & Archives. 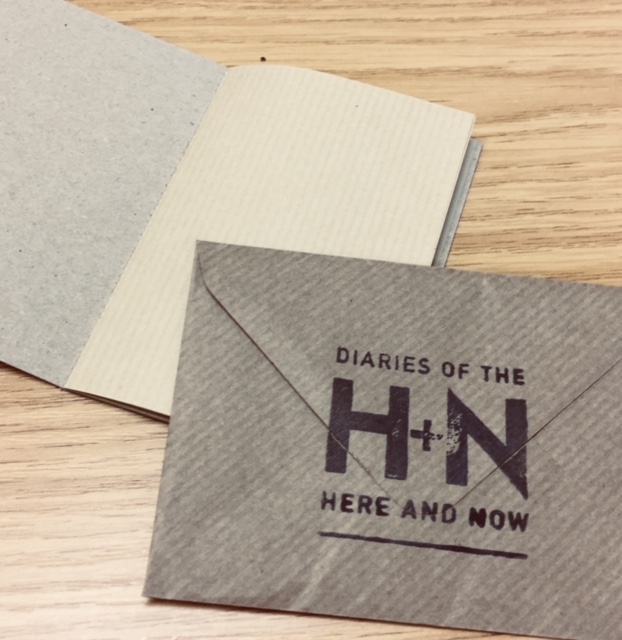 Diaries of the Here and Now

Diaries of the Here and Now: diaries will be available to collect in the Templeman Library from the 29 October until 11 November, and need to be returned by 25 November 2018.

The Tiffin Scrapbooks is a small collection of scrapbooks containing several hundred black and white and coloured images of windmills and cuttings mainly from around the county of Kent but also elsewhere in the UK and even from further afield in Europe.

The first scrapbook is titled ‘Windmills In Kent-past and present’ including photographs from the villages of Aldington in Mid Kent to Worthin East Kent. 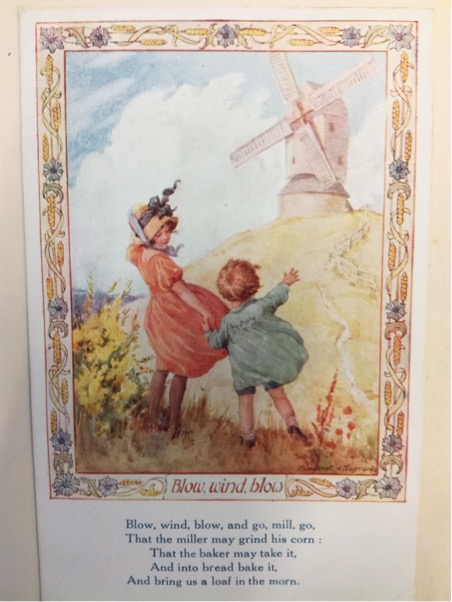 This card is pasted into the front of MILL/TIFF/2 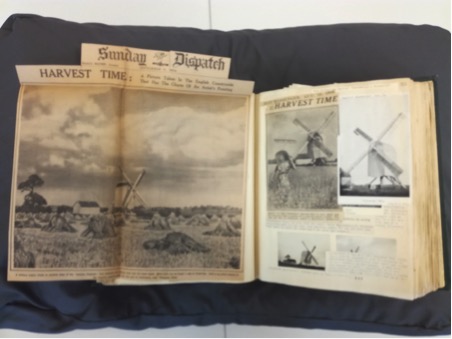 Scrapbook three again covers the Windmills of Kent and was assembled in around 1935. It includes cuttings, photographs, maps, poems, lists, postcards, typescript text and cartoons. It includes items on windmills from the villages of Acrise in South Kent to Yalding in West Kent, as well as images of some other subjects. 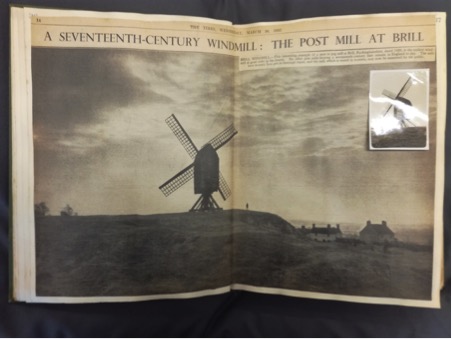 This image is pasted into Tiffin Scrapbook MILL/TIFF/3

The fourth scrapbook contains a photographic record of all of the windmills in Kent that remained standing in the year 1931 taken by A. W. Tiffin This includes examples from the Kent villages of Ash in East Kent through to Woodchurch in South Kent.

The last scrapbook is known as the Lancaster Burne Album and includes 261 pages of cuttings, postcards, adverts, photos and manuscript notes regarding windmills that can be found from Argos Hill to Zoandam. It includes windmills in Kent, West Sussex, East Sussex, Surrey, Holland, Belgium and France.

The collection can be browsed via the online catalogue via https://archive.kent.ac.uk/TreeBrowse.aspx?src=CalmView.Catalog&field=RefNo&key=MILL%2fTIFF.

If you would like to take a closer look at any of these five items and their fascinating images of windmills then please get in contact with us on specialcollections@kent.ac.uk or +44 (0)1227 82 3127.

Alternative comedy: a style of comedy that rejects established stereotypes (especially racist or sexist) and often containing a political component.

In the 1970s traditional club comedians of the time often relied on jokes targeting women and minorities. A dislike of this led a group of performers at London’s Comedy Store to begin to pioneer an approach in opposition to the mainstream of British comedy.  It eschewed a reliance on a standardised structure of a sequence of jokes and punchlines, tending instead to be somewhat more free-form.  What resulted was more akin to comedy’s answer to punk.

Martin Stiles was and no doubt still is a keen fan of comedy.  He spent many years as a devoted follower of live stand-up, and both radio and tv comedy shows.  This led him to do two things.  Firstly, he created a detailed comedy index of comedians, producers and writers.  For each he listed the individual’s tv and radio comedy credits, often including the relevant year of transmission for each.  Secondly, he assembled a wonderfully impressive collection of comedy scrapbooks.  Stiles attended as a member of the audience the recording at the Paris Studio in Lower Regent Street, London of a vast array of comedy shows.  This he did several times a month, sometimes several times a week!  Each scrapbook includes newspaper cuttings, many from the Radio and TV Times, tickets for the shows and flyers sent out by the ticket unit to promote the recordings of the shows.  Some of these items are autographed by the performers featured.  The shows involved include many famous programmes such as Red Dwarf, The Mary Whitehouse Experience, Whose Line is it Anyway, I’m Sorry I Haven’t A Clue and Knowing Me Knowing You…With Alan Partridge.  Many were pilots and by necessity includes some shows which didn’t make it beyond the pilot stage. 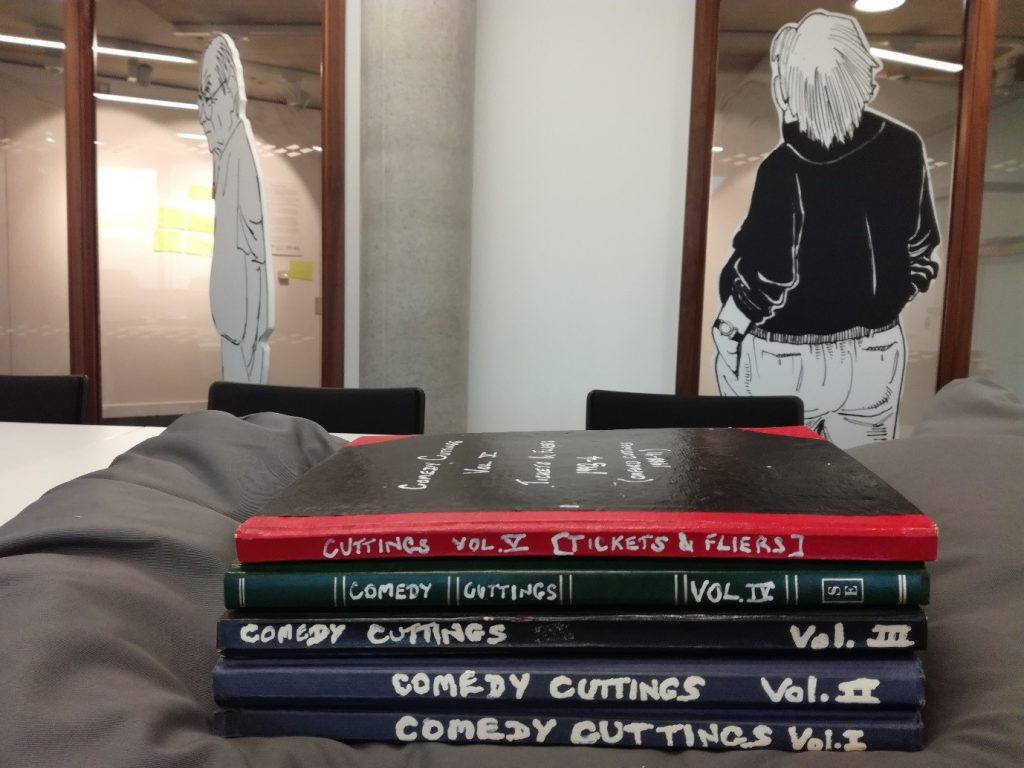 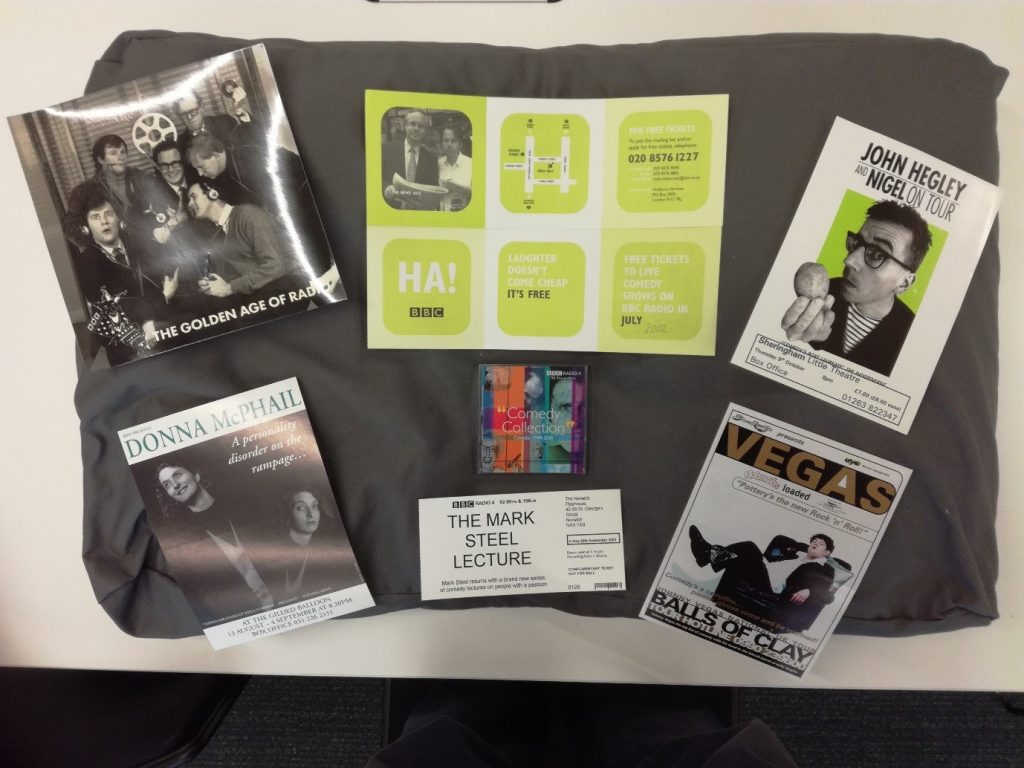 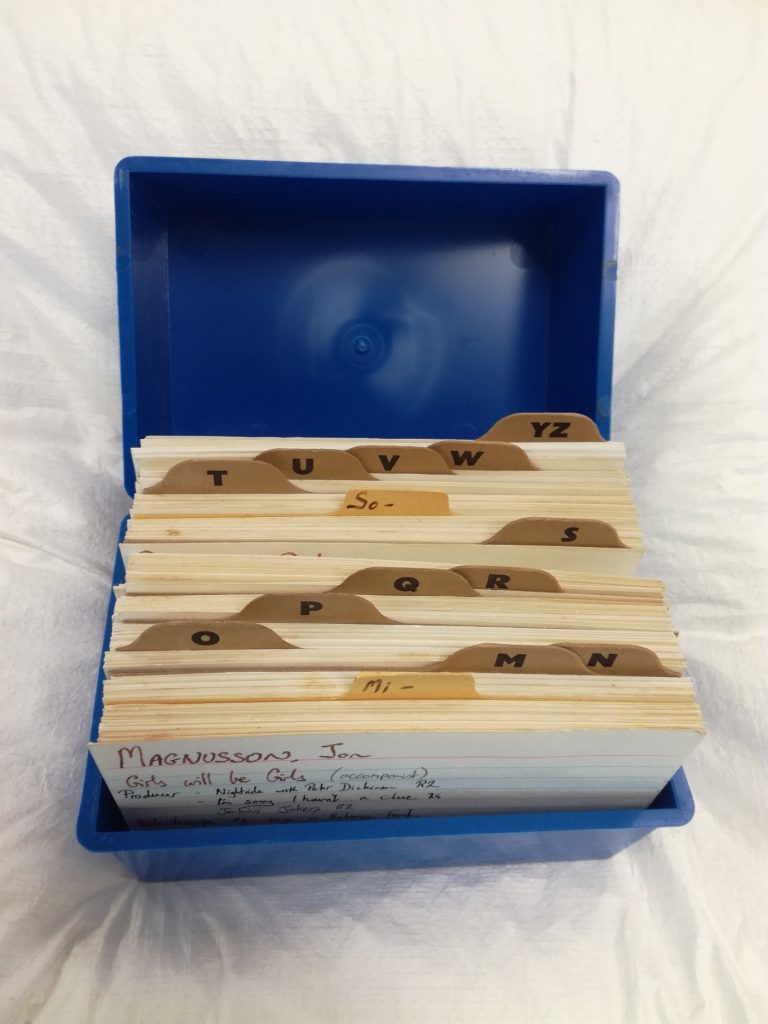 Special Collections & Archives are displaying an exhibition called Prescriptions: artists’ books in the Templeman Gallery. The pieces on display are from a collection accessioned into SC&A last autumn. 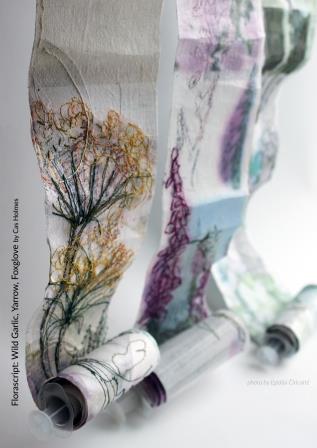 The artists’ books in this collection were first shown at Prescriptions, an exhibition at The Beaney House of Art & Knowledge in Canterbury (21 April—25 September 2016), curated by Dr Stella Bolaki and Egidija Čiricaitė.

The Prescriptions exhibition at the Beaney was structured around the book art of Martha A. Hall (1949-2003), a former teacher and professional weaver. Martha was diagnosed with breast cancer in 1989, and in 1998 she began documenting her experiences with breast cancer and her interactions with the medical community through book art.

Other artists were invited to submit artists’ books for the exhibition, reflecting on the themes of illness, grieving, surgery, birth, recovery, mental health, aging, treatments, and wellbeing. Over 200 artists worldwide submitted nearly 250 works, of which 88 were selected for the exhibition. 71 of these were deposited with Special Collections & Archives at the University of Kent in autumn 2016. 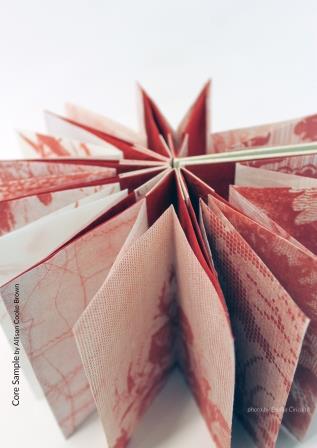 We are really excited about this collection, one of the most recent accessions into SC&A. The works in Prescriptions: artists’ books complements the teaching that occurs through seminars held in Special Collections & Archives (particularly those which interrogate materiality and the physicality of books), and also demonstrates SC&A’s commitment to preserving collections of varied formats which actively support current research and teaching at the University.

Prescriptions takes place as part of a wider research project on artists’ books and the medical humanities, organised by the University of Kent and the University of New England (Maine Women Writers Collection), and supported by the Wellcome Trust. You can find out more information on that project on the Artists’ Books and the Medical Humanities research project site and the School of English web pages. 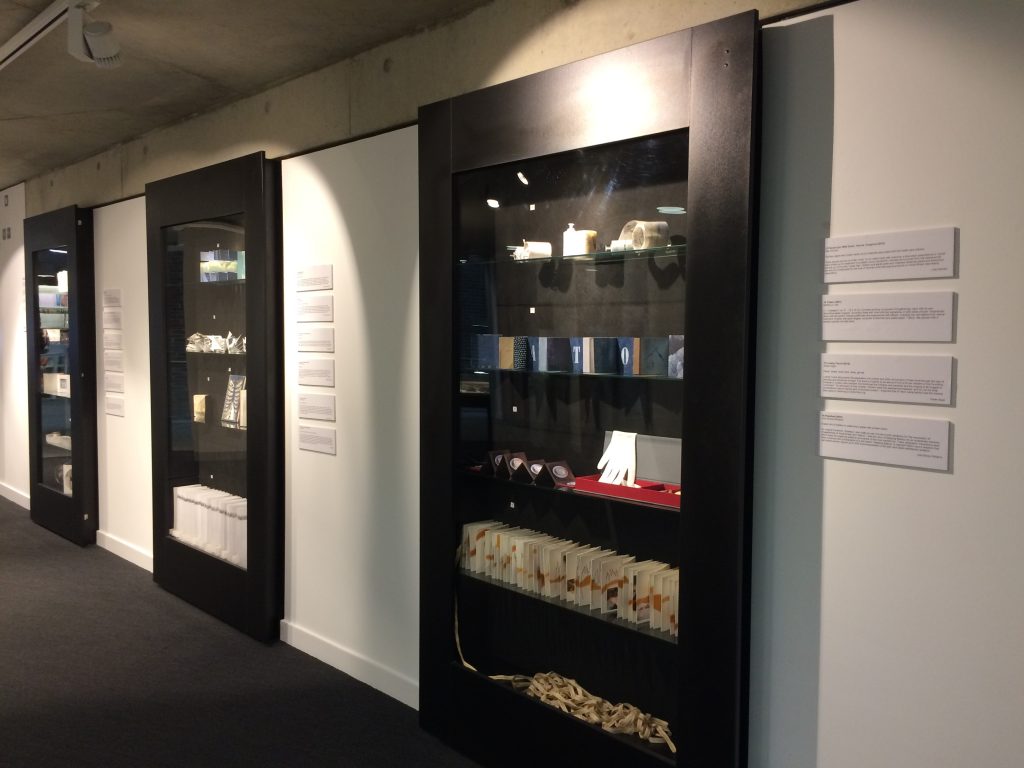 Prescriptions exhibition in the Templeman Gallery