Laoise Gallagher, an undergraduate at the University of Kent’s Centre for Journalism, has been hired as a feature writer for Irish Dancing Magazine – whilst still completing her final year of studies.

During her second year of studies, Laoise designed and wrote an article for the publication as part of a print assessment. After being encouraged by lecturers to pitch it to the Irish Dancing Magazine, Laoise successfully had the article published as a double-page feature. She was subsequently offered the role of feature writer for the publication.

Laoise, who is also a World Championship level Irish dancer, has built up her journalism experience whilst at Kent with placements writing print articles at the Medway Messenger and an internship at broadcast news outlet KMTV. She is now trained in print, radio, TV and online journalism.

After being an Irish dancer from a young age, around six years ago Laoise began competing professionally, training three to four times a week for the Reel Eire School of Irish Dance. Her biggest achievement to date is being ranked third in the Southern Region, which qualified her to represent England at the World Championships in North Carolina last year. 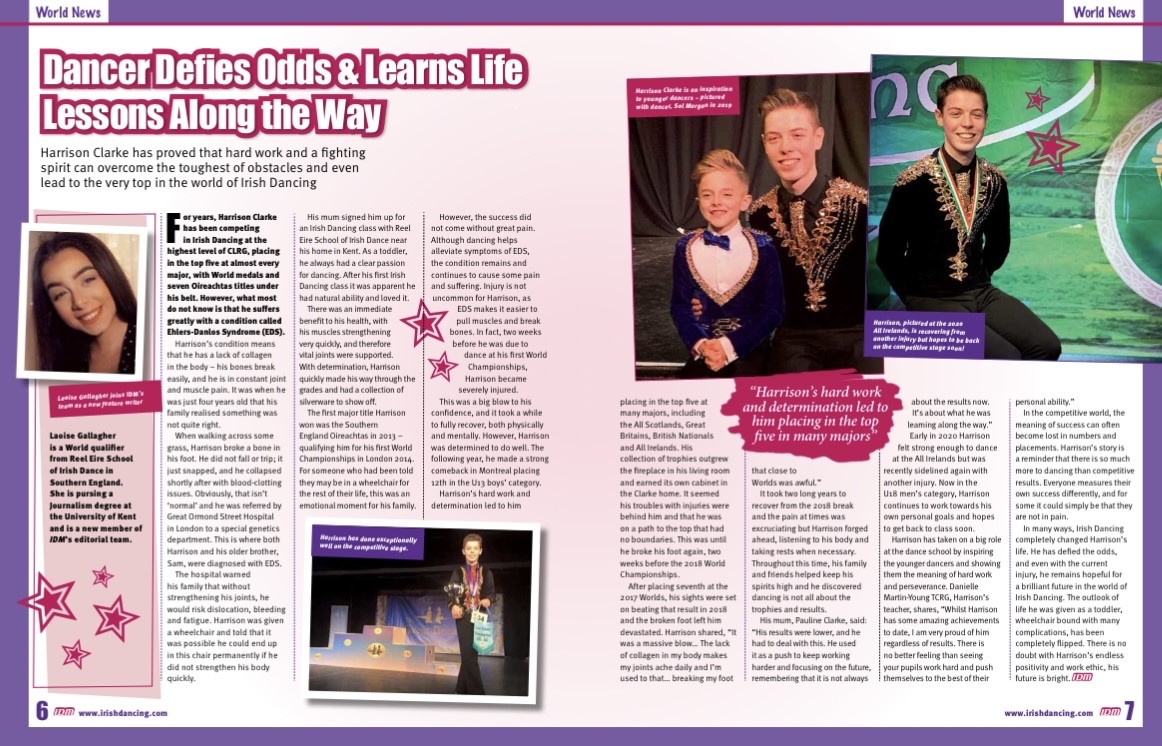 Laoise said: ‘As a World Championship level Irish dancer myself, I thought that it would be smart to pick a niche magazine to pitch to as I could really immerse myself in the story and show expert knowledge. To make the design as accurate as possible, I contacted the magazine to ask for specific details on how they would lay out a feature piece. They were so helpful and when I submitted my assignment, I also sent it to the editor of the magazine. She was really impressed with the piece and I was delighted to not only have it published but to be offered a role in their editorial team too. This is so valuable to have as experience on my CV.

‘Studying at CfJ has been the best few years of my life. When I joined, I was quiet and shy, the thought of a phone call was terrifying. Now I am in my final year and it feels like I have grown so much as a person and the skills I have developed as a journalist really prepare you for the real world. The lecturers go above and beyond to support you in whatever route you want to take.’