Postgraduate student Felicia Fricke, who has recently completed her PhD in Classical & Archaeological Studies, has received media attention in the Caribbean islands of Curaçao and St Maarten for the research she undertook for her thesis entitled The Lifeways of Enslaved People in Curaçao, St Eustatius, and St Maarten/St Martin: A Thematic Analysis of Archaeological, Osteological, and Oral Historical Data.

Felicia’s research combined oral history, archaeological and skeletal data to generate a narrative about the lifeways of enslaved people on the Dutch Caribbean islands of Curaçao, St Eustatius, and St Maarten/St Martin.

In an interview aired on television show Prome Enkuentro, Felicia notes the dominant narrative from this period has been developed from accounts given by European colonisers and that it is important that “other voices are heard” when describing the lived experiences of enslaved people in this region of the Caribbean. In combining archaeological evidence with other records including oral histories from those resident on the islands, Felicia has been able to construct a narrative that better describes these lifeways. In continuing her research, she hopes to make the results open access so that the information is made available to the people of the islands.

Felicia’s research has also been featured in local press including the Saint Martin News Network (in English) and in print in a recent edition of Amigoe Nieuws (in Dutch). 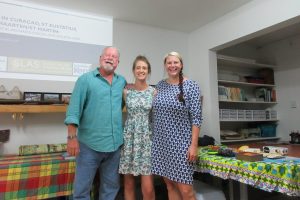 Felicia is pictured below (centre) in St Maarten with Dr Jay Haviser, the archaeologist in charge of the St Maarten Archaeological Center, and Jennifer Yerkes from the St Martin organisation Les Fruits de Mer, which runs the Amuseum Naturalis on the French side of the island.