After months of training, three brave  staff cyclists made it and along the way successfully raised funds for several charities.

Tania Durt (Brussels), Jim Gardner (Kent Union) and Dan Weale (Woody’s) officially started their ride at 05.00 on Saturday 26 May from the University of Kent’s Paris School of Arts and Culture and arrived to Calais at 01.00 on Sunday 27 May. They were supported throughout their ride by Olivia Martin and Liam Ryan from Kent Union.

The 24hr Cycle ride is one of the three fundraising challenges organised in 2019 by University of Kent Union.

Tania Durt decided to take part in this ride to represent the University of Kent’s Brussels School of International Studies and to celebrate 20 years of the University of Kent in Europe.  In addition to raising money for the three Kent Union supported projects: The Access to Activities Fund, Liberation Groups and Nightline, Tania decided to support a local Brussels charity which provides food and shelter for refugees: Porte d’Ulysse, Plateforme Citoyenne de Soutien aux Réfugiés.

Tania is also one of the regular volunteers who helps to prepare breakfast.

Tania said: This Cycle Challenge has been a great opportunity not only to raise funds and awareness on specific topics, but also to meet up with ‘overseas’ colleagues. Thank you to all participants and staff who have coordinated the logistics to make this possible!

Here is the ride in figures: 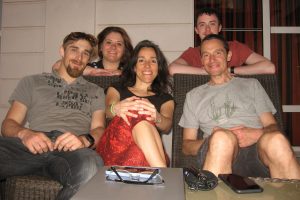 Ahead of the 24hr Cycle Challenge. From left – back – Olivia Martin, Liam Ryan and – front – Dan Weale, Tania Durt and Jim Gardner.