Intriguing insights into the lives and escape attempts of World War 2 German prisoners in Canadian camps can be gained from a selection of files, brought together in the 1950s, held here at Kent. They were accumulated by Harry Kendal Burt, better known as Kendal Burt, joint author of ‘The One That Got Away,’ a book detailing the successful escape of Oberleutnant Franz von Werra from a Canadian prison camp. These records were brought together to write a book about another escapee, Egbert Brosig, who failed to return to Germany despite numerous escapes from prison camps. Unfortunately, it seems the book was never published, but the information in these files, including several letters from Brosig himself, makes for fascinating reading.

Excerpt from a 1943 Montreal Gazette article describing Brosig as a leader of a mass escape.

Leutnant Egbert Brosig was captured early in the war, and, along with most other people at the time, expected it to be over quickly. In a letter to Burt in October 1956 he observes that initially his escape attempts were made in order to ‘harass the enemy’, which seems to suggest he wanted to feel he was making a contribution to the fight over in Europe, even whilst imprisoned in Canada. However, as the war dragged on and he was still held in Canada, his escapes were often made in an effort to relieve the monotony of day to day life.

The amount of detail that went into planning an attempt is often staggering. Brosig obviously had good English, and in a letter from March 1957 he says he learnt most of it by conversing for hours with Canadian stokers at the camp, and working with the dentist who treated the prisoners. He found this particularly important as he could pick up Canadian slang, which would have assisted him in blending in when out in public. He also attempted to escape as a Russian soldier, and planned escapes as Spanish or Greek. However, as far as language was concerned, he had a plan to fall back on. Should someone question his ‘imperfect English’, he would say he was brought up by a German speaking mother in a neutral country (such as Switzerland), or German speaking area (like Blumenau in Brazil), after his English, Spanish, Greek or Russian father passed away when he was very young. He studied Russian and Spanish whilst in captivity, and even taught himself Japanese, but gave this up in 1944 after developments in the war made him believe it would not be an asset.

His plans for disguising himself, or not as seemed appropriate, go in to a similar amount of detail. In one letter he stresses the importance of not looking like an escapee, or like he had refused to take part in the war, as doing so would definitely draw attention to himself. In his first escape he wore an army uniform. His prison uniform was particularly useful in this, as his trousers were the same shade of blue as the air force wore, and his trousers couldn’t be confiscated, ensuring he always had half of a uniform available. In his second escape attempt he had two halves of a leg cast which he held together with bandages. However, on his third and fourth attempts he relied simply on falsified hospital papers. 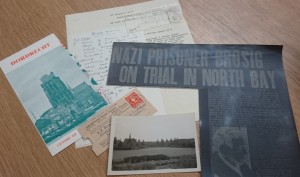 A selection of items from this collection

In a letter from September 1956 he details a plan he made to escape disguised as a girl. He describes how he had the camp tailor make him a dress and matching hat from a purple bath robe he owned, and picked up heels from the shoemaker and a wig from the barber, and planned on using tennis balls to pad out his chest. He even bribed camp guards to get him suitable hosiery and makeup. In the end he never made this attempt, and donated all these items to the camp theatrical group.

Brosig gives anecdotes of events that took place whilst he was on the run. In 1943 he attempted to escape by train, hiding in mailbags, and was accused on recapture of having stolen parcels. He was cleared of this charge in 1944 by the Supreme Court of Ontario, but later received an official notice that the Attorney-General planned to appeal against this decision. In another escape attempt by train, two civilians asked him to take care of a ten year old girl who was journeying to her grandparents. This he did, and even persuaded her to share some of her food with him, ensuring his own rations and limited money would last a little longer.

Some people went to extremes to attempt escape. Brosig describes how he met a man in one camp who had feigned madness for months. He was moved to an asylum, where he planned to escape. In the meantime he kept up the pretence, even enduring solitary confinement and electric shock treatment so he wouldn’t be discovered. 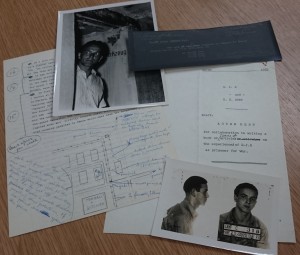 A selection of items from this collection.

One interesting insight that can be gained from reading these letters is the relationship between camp guards and their prisoners. As seen above, guards were perfectly willing to be bribed, but they seem to have had positive relationships with the prisoners aside from that. Brosig observes that he never gave details as to how he escaped when he was recaptured in order to avoid incriminating those who helped him, which he believed made him popular among the camp guards. He even recalled a time when a camp leader asked him to attempt an escape again, in order to enforce arguments made to the camp authorities concerning security.

Look out for another post using more from this intriguing collection, coming soon!