We are sorry to announce the death of Donald William Muggeridge, who passed away peacefully in San Rafael, California on 14 April 2015 at the age of 97. Donald lived a long and varied life and will be missed by his family, friends and all those who knew him.
Donald generously donated his collection of windmill photographs and associated information to the University of Kent, along with his father’s collection of photographs, which include rural subjects from 1904, of a life largely vanished today. 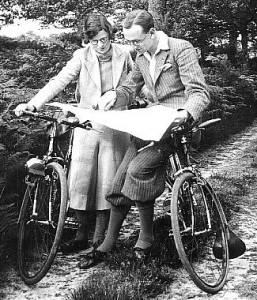 Inspired since childhood, Donald initially accompanied his father on his trips, but by the 1930s was working with his friend Syd Simmons to track down and photograph mills all over the UK. In 1936, Donald met his future wife, Vera, and the couple spent their holidays cycling around the countryside in search of anything of ‘bygone’ England. Along with wind and watermills, this included direction posts, mile stones, columbariums and the furniture of old churches.

The Muggeridge Collection contains photographs on both glass plate and acetate negatives which span the twentieth century and a number of countries, including Europe and America. While  a part of the Allied advance at the end of World War Two, Donald even managed to find time to photograph a number of mills in Belgium, Holland and Germany. In the 1950s, Donald, Vera and their young son Derek immigrated to Canada, and later moved to San Francisco.

After donating the collection to the University, Donald took a keen interest in its digitisation and was eager for the photographs to be made available to researchers and enthusiasts around the world. Further materials from Donald’s collection were donated to The Mills Archive in Reading.

While we are saddened by the news of his death, we are grateful to Donald and his sons for their generosity in making these materials available to the public and hope that these collections will continue offer an insight into the ‘bygone’ rural life in which Donald and his father were so interested.

A full obituary and biography of Donal is available via the Marin Independent Journal.

For more information on the Muggeridge Collection and to view images, see the Special Collections website.