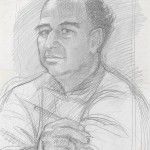 This year marks the centenary of human rights and anti-apartheid campaigner Harry Bloom’s birth. Harry was a founding member of the Law School at the University of Kent and a key part of the teaching staff. To celebrate his life and the service he gave to the University, Special Collections has put together a small exhibition in the Harry Bloom Room of the Templeman Library, which will be open until 19 November.

Harry was born in South Africa and graduated with a degree in law in 1937. He worked as an advocate in Johannesburg until emigrating to London with his first wife, Beryl, in 1940, where he worked as a war correspondent. After the war, the Blooms moved to Czechoslovakia until the increasing power of the Stalinist regime led them to return to South Africa. There, Harry campaigned against apartheid, advocating equal rights for all. He worked alongside Nelson Mandela during the 1950s. Because of his campaigns, Harry was detained without trial in 1962, after which he returned to London, to work as an academic and journalist. He joined the University in 1966 as a key part of the nascent Law Department. 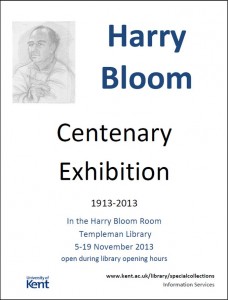 One of Harry’s key interests in the development of the interdisciplinary School of Law was the role of the media and of technology; indeed, he was a leader in this field long before the age of the internet brought the topic to prominence. His teaching also put an emphasis on practical experience as well as passive learning, through research projects. In 1973, Harry was integral in setting up the Unit for Legal Research on Computers and Communications at the University. 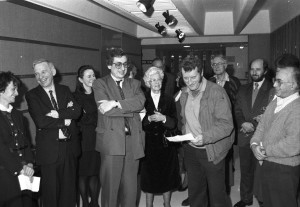 After a long illness, Harry Bloom died in 1981. To celebrates his contribution to Kent and to his uniquely advanced work on computers and communications, Harry’s widow, Mrs Sonia Bloom, gave a generous donation to the Library for the equipping of an IT Suite in the library for students.  The Harry Bloom Room no longer houses computers, but still offers a designated study space for students to work in and to be inspired.

The University organised a celebration to mark the Centenary of Harry Bloom’s birth on November 5th 2013 with a Seminar for his academic friends and colleagues who had worked with him at Kent. This was an opportunity for experts in the field and colleagues to discuss Harry’s work and celebrate his life.  Praise of his work was led by Professor Igor Aleksander, Emeritus Professor at Imperial College and holder of a lifetime achievement medal for contributions to informatics by the UK IEE in 2000.   We are delighted to be able to contribute to these celebrations with this small display. Do pop in to take a look at it if you can.

Not content with just the Harry Bloom display, we are also hosting a new exhibition for the DocExplore project, which has worked to bring digital versions of rare and fragile historical manuscripts to a wider audience. Combining expertise and materials from the University of Kent, the Universite de Rouen and Canterbury Cathedral Library and Archives, the project seeks to:

empower…citizens on both sides of the Channel to engage with, explore and study their cultural heritage, as embodied in written and printed documents, in meaningful, informative, accessible and entertaining ways

With interactive touch screen technology and a wealth of information, this exhibition is one not to be missed! Why not pop in when you’re in the Library – it’s in the Gallery, just to the left of the Templeman’s cafe.

And, of course, we do have more exhibitions and displays in the pipeline – but more on those as next time!