Now that we’ve made it to the other side of the exhibition process, it’s time to look back on what we’ve achieved and where we go from here (and to breath a sigh of relief). 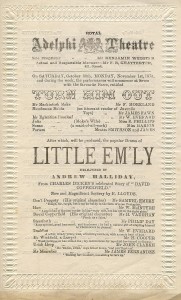 Programme for 'Little Em'ly' at the Adelphi Theatre, 1875

2012 was always going to be a year with plenty of Dickens, and our ambitious aim is to put on three exhibitions this year about the great author’s work. The first, Dramatic Dickens and nineteenth-century theatre is all about how Dickens’ contemporaries reacted to his works: with such enthusiasm that the author found himself swamped by pirate versions of his own stories. This features original nineteenth century playbills, books, programmes and other materials.

Dickens’ relationship with theatre in his own lifetime was rather ambiguous. In his youth, he had considered going on stage; there were plenty of opportunities for young men to pay in order to act in theatres. In the end, Dickens never reached professional theatre, although his interest in the stage is evident throughout his works. Pickwick, for example, has an actor as a major character, and Nicholas Nickleby has several episodes in which theatres, actors and plays are important (and ridiculed). However, within years of his first Sketches being published, Dickens’ writing was adapted for the stage and, for several decades, became a staple of Victorian theatre. 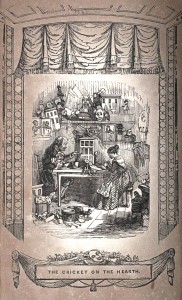 Illustration from 'The Cricket on the Hearth' adapted by Edward Stirling, firast performed at the Adelphi Theatre

While he may have been flattered by the attention, Dickens was soon angered by the liberties some playwrights took with his work. This was especially the case when dramatisations were produced before the serial publications were completed. Dickens put his anger into Nicholas Nickleby, ridiculing hack playwrights and adding ‘I would rather pay your tavern score for six months, large as it might be, than have a niche in the Temple of Fame with you for the humblest corner of my pedestal, through six hundred generations’.

Despite this anger, Dickens worked with theatres and playwrights to adapt his work and create new plays. He collaborated with various theatres to produce his Christmas stories, each written with the stage in mind. In collaboration with Wilkie Collins and others, he wrote plays such as A Message from the Sea. He also acted in amateur productions and performed dramatic readings to the public. Yet Dickens never achieved a professional acting career, nor did he succeed very frequently in making his own adaptation of his own work the most popular version on stage at any one time. 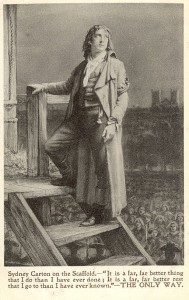 Sir Martin Harvey as Sidney Carton in 'The Only Way' c.1899

To experience the frenzied excitement and interest which followed Dickens on stage, come to the Library Gallery on level 1 of the Templeman Library to explore Dramatic Dickens and nineteenth-century theatre. The exhibition will run until mid-May, during normal library opening hours. Please do let us know what you think of the exhibition by writing in the Comments Book.

Two more exhibitions will follow on the theme of Dickens this year, one in the summer, looking at cartoons inspired by Dickens and one in the autumn, exploring the legacy of Dickens in the twentieth century. We’ll let you know more about these nearer the time.

So where next? Well, we still have some work to do on uncatalogued Dickens material, work on the Renfrew Collection and Hendrie Collection are ongoing and we’re hoping to get some more playbills digitised as well. And just to add some excitement to the mix, Chris and I investigated a small cache of collections this morning which had previously been unmarked and unsorted…more on that and all exciting developments shortly!