Our discussion of Alexandru Maftei’s Miss Christina (2013) ranged across various matters such as how the film related to both the gothic and horror genres. This included our recognition of some staples of the gothic (the old dark house, a portrait, keys and locks) but also interesting innovations in terms of the gothic heroine. We commented on the fact these genres sat uneasily with one another and ways in which the film was marketed. Other areas of interest were the adaptability of the author whose novella the film was based on, and gothic films certain aspects reminded us of. 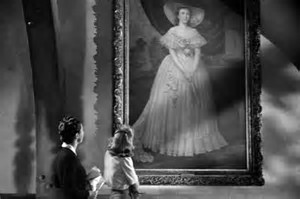 The opening of the film establishes the large, deserted, gothic house, in the depth of a harsh winter and creates mystery around the dishevelled man looking at and chalking portraits of a faceless woman. Portraits become more important to the film later, as we see this man when he first becomes enraptured by the beautiful woman (the eponymous Miss Christina) he is attempting to capture in her original portrait. Indeed, she seems to step forward from this as she enters the man’s dreams. We particularly noted the significance of the portrait, and the haunting presence of a woman, to Rebecca (1940).

After the long opening scene, the action shifts to a young couple, sat next to one another, as they journey on a train. Despite the very different colour schemes of these scenes (from bright whites to red and yellow tones) it soon becomes clear that the well-dressed and happy young man, Egor (Tudor Aaron Istodor), is a slightly younger version of the man in the dilapidated house. It is mentioned that Egor is a painter. More significantly, further elements of the gothic are introduced, as the young woman, Sanda (Ioana Anastasia Anton), tells Egor that in her family home ‘guests can lose their way’. 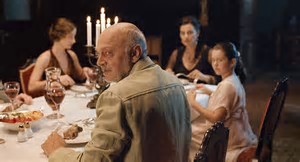 Soon after their arrival at the isolated house, with its few inhabitants, odd happenings occur at dinner. Sanda’s mother, Mrs Moscu (Maia Morgenstern), and Sanda’s young precocious and sinister sister Simina (Ioana Sandu) look at a figure unseen to some of the other characters and to the audience. Furthermore, Sanda’s mother eats bloody meat with an undisguised appetite. Mention is made of a relative, Miss Christina (Anastasia Dumitrescu), who is Sanda and Simina’s aunt – their mother’s sister. Other characters provide information on the fact Christina is long dead and comment on her unsavoury character. The presence of a professor of archaeology (Nazarie, played by Ovidiu Ghinita), coincidentally excavating a nearby necropolis, further adds to the sense of the macabre. 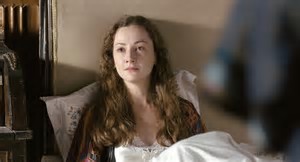 We discussed Sanda’s character, and her problematic gothic heroine status. Sanda is seen weakened by anaemia, unable to get out of bed, while her mother seemingly summons mosquitoes. She might therefore be identified as a gothic woman in peril, at the mercy of blood-sucking insects. Egor manfully undertakes to protect her, asking for her hand in marriage so that he has justification in separating her from her family. The fact he then locks himself and Sanda in her bedroom, still causes eyebrows to be raised. While Sanda is in some ways a victim, her seeming willingness to collude with what we presume to be Christina’s vampiric tendencies, complicates the matter. Worried that Sanda is losing her fight for life, Egor briefly leaves his post and, on his return, sees that Sanda’s family has gathered around to ‘help’ her. The family portrait of the three women suggests Sanda’s complicity in whatever process has revived her. 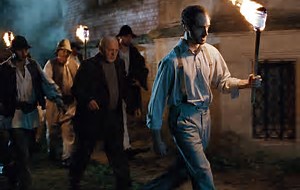 We thought it was especially interesting that the film inverts some gender expectations as in addition to playing the male defender, Egor takes on the active investigator role of a gothic heroine. He prowls around the house at night, lantern in hand, trying to find the answer to the odd goings on. Like Sanda, Egor is also threatened by, and compelled towards, Christina. We realise in retrospect that Egor has in fact been broken by her as she foretold

A significant departure from the gothic narrative is that it is not just one character, and the woman, who feels something is wrong. The archaeology professor, who is already resident when Sanda and Egor arrive, wants reassurance from Egor that he too can hear the light footsteps which pass by their bedrooms. They are later joined by another man – a medical doctor with a penchant for hunting – who also needs to be ensured the other men are experiencing these strange occurrences. It is important to note that we are therefore offered three men’s points of view, two of whom are scientists, rather than the more usual potentially hysterical female protagonist. 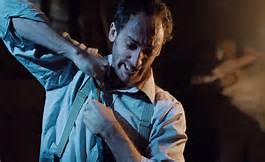 The four women share an interesting connection beyond their shared genes and gender. When Egor finally realises that Christina is a vampire and attempts to drive a stake through her grave and into her heart, Sanda and Simina also die. While their mother does not suffer the same fate, she chooses to run into the now-blazing house, ensuring her own death 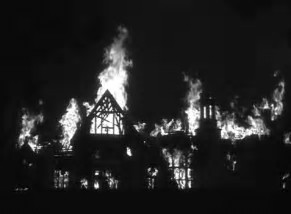 We found the blazing house itself recalled earlier gothic films. In Rebecca the fire is set by a vengeful Mrs Danvers who hates the current Mrs deWinter (Joan Fontaine). Thornfield in Jane Eyre (1943) burns to the ground due to the lack of care of the nurse responsible for Jane’s (again played by Fontaine) fiancé’s mad first wife. The fire in Miss Christina is notably different. It is started deliberately by Egor (either as, or in protection of, the film’s gothic heroine) as he first attempts to rid himself of Christina.

Despite the film’s many gothic elements (the house, the portrait, keys and locks, the innovative gothic hero/heroine) it unconvincingly lurches towards horror in its final half hour. What was previously heavily implied – Miss Christina’s vampire status – is confirmed as Egor goes on a melodramatic rampage. The pacing of the film seems odd. From a slow build up in the more gothic two thirds of the film, the ‘revelation’ of Christina’s vampirism is rapid. In addition, it is not really a revelation at all for an audience immersed in film and folk lore. The rather heavy hints of bloody meat and anaemia, are joined by embodied items which suggest Egor is not dreaming when he sees Christina – she leaves behind one of her pink gloves as well as her scent of violets.

Maria gave us information about the film’s production, marketing and exhibition (see also the previous post) which shed light on the way it drew on the gothic and horror genres. Despite the film’s high production values (seen in the lavish costumes, settings, and CGI) and its obvious nod to the Hollywood blockbuster in its turn to horror towards the end, the film was released on the festival circuit. This satisfied neither the horror junkie, since the film has no jump cuts or gore, nor those, perhaps more discerning smaller audiences, hoping for a more psychological film with developed characters where we are unsure as to what is real and what is not. Maria also mentioned that Mircea Eliade’s novella apparently gave Christina 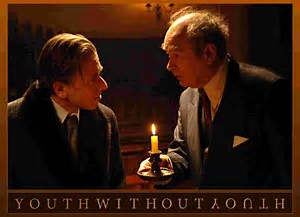 a more nuanced character, acknowledging that many of the tales of her promiscuity and insistence on having peasants whipped were not true. The film represents these more straightforwardly, with Eliade’s social commentary on the crumbling of the Romanian nobility also missing. It was noted that another adaptation of the author’s work – Francis Ford Coppola’s Youth Without Youth (2007) – was similarly problematic. 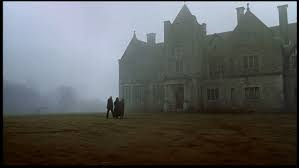 In addition to Rebecca and Jane Eyre, we also commented on other films we were reminded of. The scene in which Sanda is at her window waiting for Christina brought Nosferatu (1922) to mind. The claustrophobic and enclosing atmosphere of the film (we are mostly confined to the house and its grounds) caused us to discuss The Others (2001) since its characters are also bound to the main house and its environs. Crimson Peak (2015) was also compared to Miss Christina. Both films mixed gothic and horror elements with varying degrees of success, with the later film more strongly appealing to horror.

Many thanks to Maria for introducing us to such an interesting film which allowed for useful examination of both the gothic and horror genres, and the background information on  the film’s production, marketing and exhibition.

All are very welcome to join us for the first of this term’s melodrama screening and discussion sessions, taking place on Monday the 2nd of October, 5-7pm, in Jarman 6.

By screening Miss Christina (2013, Alexandru Maftei, 101 minutes) we are referring back to the wonderful Gothic Feminism conference held at Kent in May 2017. (See the Gothic Feminism blog here: https://gothicfeminism.com) Maria (who presented an excellent paper on Miss Christina at the conference) is very kindly giving us the opportunity to see this film, and has provided the great summary below. Thanks Maria! 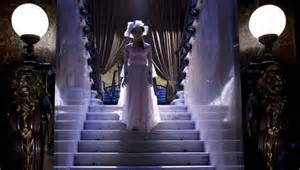 Alexandru Maftei’s 2013 film Miss Christina represents the second adaptation of Mircea Eliade’s novella with the same title. The film largely follows the same narrative line as the novella. The young painter Egor (Tudor Aaron Istodor) and his love interest Sanda (Ioana Anastasia Anton) travel to her family’s countryside estate to get away from Bucharest’s busy city life. Upon reaching the Moscu family mansion, Egor observes the strange interactions between members of the household. The mother, Mrs. Moscu (Maia Morgenstern) seems weakened, drained and ill. Professor Nazarie, a guest in the mansion, is polite and pleasant by day but weary at night. Sanda’s younger sister, Simina (Ioana Sandu) appears as a happy but creepy child, who always talks about her mysterious aunt, Christina (Anastasia Dumitrescu). Egor is led to Christina’s portrait and becomes increasingly obsessed with it and falls further and further under her spell.

Miss Christina created quite a hype among movie-goers at the time of its release, largely because it was marketed as the first Romanian horror film. However, it received mixed reviews. Some critics noted that there was nothing scary about the film and that attempts at jump scares fell short and even became embarrassing. Other critics focused on the Gothic elements of the film, praising it for the setting and costumes. Given these reactions, Miss Christina generates an interesting discussion in terms of marketing, genre and audience expectations. As a DVD copy has not been released for purchase, this screening is a unique opportunity to see the film (with English subtitles!).

Do join us, if you can, for an interesting discussion on the intersection of the gothic and horror in film.