I risk once again falling into boring sporting anecdote – nevertheless I will press on. I was fascinated to see a sporting analysis of premier league football by BBC pundit Pat Nevin (an accomplished player in his time). He notes that the quality of corner kicking by players has declined in the past ten years or so. “Due to their overpaid status” I hear you grumble.

Nevin’s analysis boils down not to the lack of application by players, poor technical skill nor rushing an important element of play in order to keep up competitive pressure, but something quite different (i.e. in Nevin’s observation, it is not the players who are the problem). 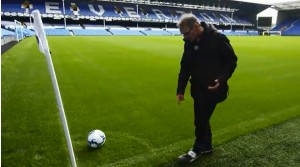 Nevin observes that now stadium pitches have synthetic grass to the side of the natural grass playing surface, right up to the line of the pitch ( left).

This surface has been placed to allow TV broadcast camera cables and sound cables to run over the area (without ruining a natural grass surface), to provide a clean space for corporate sponsors and VIP visitors to make pitch-side visits (e.g. ‘stadium experience’ premium ticket guests), and as a dry warm-up surface for team subsitutes.

The problem is that this mismatch of surfaces is difficult for a corner kicker to negotiate properly. Also the pitch side is often set as a downward slope, so that players have to run uphill towards the ball placed on the pitch. Essentially the system that the players are working in has been altered to the detriment of the game (the purpose of the football event – one would presume). Even the best people will struggle with these limitations.

Interestingly André Schürrle (who set up Germany’s winning goal at the 2014 World Cup) innovated to overcome this problem by running down the touchline on the grass to get a consistent run up to kick the ball at an angle less than 90◦ from his body (a tricky, even dangerous, compromise).

Similarly striking is Nevin’s identification of the solution to this problem. Replacing the plastic 3G ‘grass’  around the corner flag with a simple patch of natural grass would enable players to run up properly, without affecting the needs of camera cables or corporate visitors! This would hopefully make the delivery of the game (the purpose of the football event, surely) not only more precise, more competitive, with more action, but also more entertaining (for fans, TV viewers, VIP visitors and corporate sponsors no doubt)!

As John Seddon has been known to mutter: ‘you couldn’t make it up!’

It is clear that the secretary/clerical function has become more professional in recent years and has made work more interesting, allowing staff to have their own outcomes.  However, with this, a few unpleasant side issues have arisen.  Work place stress has occurred; resources don’t always match the increase in student numbers.  There is increased stress, increased expectations, unrealistic deadlines, lunch breaks are often forgone to play catch up, there are more demanding students, a perceived lack of promotion opportunities, and email has made work become urgent and insistent, and most of all, unseen to others.

When discussing the value of those involved in secretarial/clerical and administrative work, it is interesting to note that in the States and other countries, a nationwide event called “Administrative Professionals Day” is observed annually to recognise the work of secretaries, administrators, receptionists and other administrative support professionals. Originating in 1952 (and originally called National Secretary’s Day), it seems worthy to report that a secretary is still the top job for women in the States – this was true in 1950 and was still true in 2010.  The trend shows no sign of abating.

Job titles have evolved over time for a variety of reasons. Some companies have infused creativity into their job titles as a way to elevate otherwise generic-sounding positions. Others have doled out inventive titles in lieu of promotions or pay raises. Common practice these days is for companies to steer clear of gender-specific job titles, or ones that have politically incorrect undertones, to avoid any chance of discrimination and to show that gender is irrelevant to the performance of the job.  Order a sandwich at Subway, and you’ll be assisted by one of their “sandwich artists.”  When perusing the Apple store for a computer or iPad, be sure to ask a “genius” for help.

Within modern day HE establishments, equality issues enjoy high visibility but sadly, historical stereotypes do still prevail in relation to clerical and administrative positions – e.g. sexism, professional snobbery and intellectual elitism.  Furthermore, the government looks at gender disparity among academics yet the secretary/clerical/administrative workers sits alongside the likes of technicians, domestic staff and a whole tranche of university staff who can sometimes be overlooked.

So there you go – call us secretaries, clerical workers, assistants, administrative officers – whatever.  We can do it all.  Whatever you call us, we, as higher education administrative professionals, will keep the offices running, whilst technology and budgets and corporatisation continually shape and influence our roles.   Remember too, we are more likely to be of the female variety.  It doesn’t mean that we aren’t capable of doing anything else – it just means we’re better at it – perhaps better at the more detail oriented stuff, which is a necessity in our line of work with students paying hefty fees for a quality service and experience. 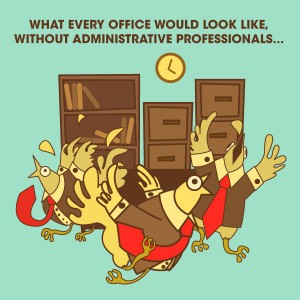