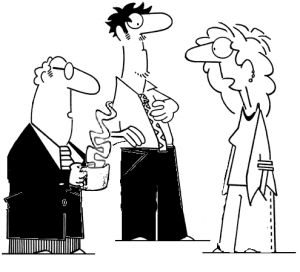 Finding time to make proper contact with people can be tricky, especially in roles where “meetings,meetings, meetings” rule, or if you are stuck behind a computer screen. Nevertheless, if we have the right mindset and a clear sense of purpose, we can make the most of personal networking, even if the opportunities are fleeting.

I recall an occasion when a colleague from an operational department picked up an idea with me for developing a training programme. She had previously drafted out a proposal which had been discussed with a couple of  colleagues, but had not yet discussed the idea at senior levels. We both worked up the idea and, with a minimum of scheduled meetings (I can recall three1/2 hour discussions), by simply keeping our bosses in the loop, within 2 months we had  the programme up and running, briefed to managers, marketed to 150+ people (many of whom voluntarily applied for a place with management approval) and the selected cohort had attended the first event. The normal turnaround for this type of activity – about 6-9 months.

How did things work so effectively on this occasion? Well, for one thing the personal enthusiasm of the people involved, secondly, the trust that each person had in delegating the work (and the trust shown by senior stakeholders in allowing us to get on with it) – and thirdly the purposeful use of time when we briefly met or had a conversation on the ‘phone. These behaviours set the tone when engaging other colleagues for support and encouraged a collaborative atmosphere in the project team. The work needed no significant new resources and the administration was hooked into existing procedures and workflow. The advantage  was a 60 – 80% improvement in turnaround time.

Of course networking may involve a host of other things; ideas, innovation, opening  up opportunities in new markets, new career pathways, business partnerships, research collaboration, cost saving opportunities, learning. There is no magic networking chemistry – ALL effective networking behaviours can be learned. If networking fails it is probably because one or both people choose for it to fail either consciously or sub-consciously…or they let the potential impact of the contact to ‘wither on the vine’ through lack of effort.

Networking is not just a social process – it needs to be far more than that in order to work properly. Good work involves the use of knowledge, understanding the psychology of people, understanding how systems work, and responding to the comings and goings of events in an appropriate manner. Networking that just involves chat delivers what it deserves…

Incidentally on a separate note – during the same two-month period described above, I had a contrasting experience. I was involved in various discussions (I lost count of the meetings, but it must have been at least six or seven) with essentially the same types of positive people (so the same positive chemistry SHOULD have been working), to resolve some minor concerns in a half-day training workshop. Now on this occasion maybe I was the problem, but progress in this instance was simply not very productive. Avenues were examined which did not require consideration and assumptions were taken which only served to delay decisions (until the real facts were extracted). This experience reminded me of some observations made in a recent blog which included some interesting ideas (attributed to the likes of Deming) but which were summarised as equations. A few choice ones are shown below:

And the moral of these equations?   –    None of these activities is real value-adding work.

We need to be diligent in how we use our time. When networking, be purposeful – look to bring something to offer to a discussion as well as have in mind something that you want to get out of it for yourself. Remember that talking together is fine, but working together can be much more rewarding.