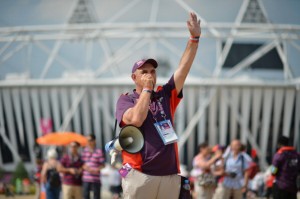 One of the interesting background stories from the London 2012 games has been the clear build up of enthusiasm by the public and their engagement with the games, its values, the experience and excitement of the competitions, support for the athletes and the appreciation for the venues and facilities. It is easy to forget in the afterglow of what has been, arguably, the best games in Olympic and Paralympic history, that this enthusiasm was not always apparent in the public or in the media.

I remember back in 2005 when the bid was announced by the International Olympic Committee. I was working in a college with hundreds of young people present. Yet I could only find one other person, an older staff member (who I heard scream out in delight from down the corridor when the announcement was made on the BBC) who was remotely enthusiastic about the winning bid – even the young people were unimpressed. Of course few can forget the impact and shock of the London bombings the following day, but the actual build up to the whole event thereafter remained low key – even the post Beijing festival in St James’ Park seemed a tiny bit lame (performances by ‘M People’ and ‘Scouting for Girls’ spring to mind).

Subsequent years saw a progression of non-stories (about hitting budgets and targets with little to moan about). Various celebrity charity cycle rides which aimed to culminate in a finish at the then-to-be-completed Olympic Park where left stranded next to hoardings and barriers, unable to enter the site due to ‘Health and Safety’. Initially there were worries about who would take over the stadium and how facilities would be maintained and the increasing costs to taxpayers. Later, when the ticketing system came on line, there was a tangible sense of cynicism – would the Games just be the preserve of the wealthy, merely rolling its customers over in a marketing runaround… and what the heck should MY family-of-four do with the disappointment of just two tickets to the women’s volleyball?

Wind the clock forward to 2012 itself and the sight of David Beckham traveling with an entourage to Greece to collect the Olympic flame sniffed a little of a media circus (would he even be in the GB football team?). At that stage the prospect of the Olympic torch touring around the country seemed a little…well…desperate.

But what actually happened? When the torch relay started out thousands upon thousands of people turned out to watch it. Slowly across the country more and more people wanted to be a part of the experience. This is partly a cultural phenomenon in the UK – ‘being there’ – but there did appear to be genuine enthusiasm from people who went, a surprising sense of belonging shared with family and friends (my parents stumbled upon the relay at Mount Snowdon by complete accident, but were genuinely caught up in the excitement of the event).

Despite this, as the Games came closer, the media doom-mongers jumped on security shortfalls, controversial anti-aircraft missile sites and rumours of ticket touting. In the preliminary football matches (played in the days before the opening ceremony) there was tangible delight in how the South Korean flag was presented for the North Korean women’s football team at Hampden Park stadium. A few days later and outcry followed apparent swathes of empty seats at venues in the early days of the Games.

But somehow the Games came together in spectacular fashion. One great surprise being the impact of volunteer ‘games makers’ who were the engine room for festival spirit and a warm welcome. Spectator interest grew –  I witnessed 80,000 people turning up to watch women’s football match – unheard of in the history of the sport.

The Games were a success on pretty much every front.

In the lull between the Olympics close and the Paralympics there were attempts to bleakly reflect on the stars who had refused to perform at the closing ceremony (Led Zeppelin, Manic Street Preachers, Elton John) although most of the reasons were legitimate. There was a suspicion that frankly, the Paralympics would fail to ignite the same feeling of excitement (what with tricky ticketing procedures, lack of ATM machines for the blind etc, etc, etc).

But somehow the Paralympics DID raise the same spirit and enthusiasm. The whole 2012 experience was a fantastic festival of sport. How on earth was this possible? It seems that we can learn a few things:-

A long term vision
Sebastian Coe’s team somehow generated a clear vision of the event and its style; even the garish logos, mascots and colour schemes (blue hockey pitches? Rather ‘un-Olympic’, surely!) really did work

A belief in the user community
The organisation aimed to make things straightforward for spectators; you had a train pass but no-one checked it – there was trust. Event organisers understood that spectators were part of the event, not just bystanders or observers. The athletes themselves were made welcome and provided with excellent services.

A healthy avoidance of other agendas
The focus was on the games, rather than politics or (mostly) economics. Protest and dissent were not so much quelled, but rather left to look out of place. Interestingly the Games appeared not to be a good platform for launching any kind of lobbying.

A consistent message built over time
The sense of what the Games represented was built up over time, but the core issues always endured.

Encouragement and feedback
Along the way the team needed to know that they were on track, on budget, the GB sportspeople needed to know that they were building their competition performances ready to ‘peak’ at the right time. Operational teams used test events and scrutinised feedback. Plenty of learning was applied in the build-up and throughout the Games (even the security procedures were changed over time – if you observed them closely).

Of course this is not a definitive checklist for navigating change, but it is worth consideration.