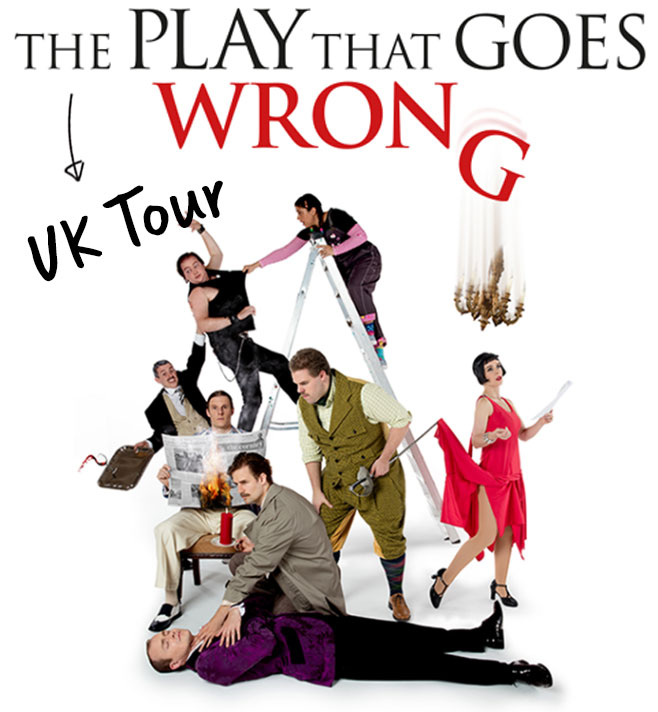 Anarchy, chaos, a missing ledger: no, not another day in the whirligig of the current political climate. Marking a return to live theatre, The Play That Goes Wrong burst back to manic life at Canterbury’s Marlowe Theatre recently, as the curtain finally lifted on the first opportunity to bring live performance and live audiences together once more.

It seemed somehow entirely appropriate that, at a time full of conflicting information, confusing government guidelines, political U-turns and a sense of life going off the rails, a play in which everything that can go wrong, will, was the first play presented to live audiences. The relief was palpable, and not only amongst those of us seated in the auditorium – there were immensely heartfelt thanks expressed by the cast to the audience at the end of the performance, for their willingness to come back in support of live arts again.

Embracing everything from insecure props to a misplaced ledger and twerking; in a climate (political and geographical…) that increasingly seems to be falling apart, a play which celebrates that very aspect of life, its unpredictability, moments of slapstick, was hugely appropriate, and perhaps offered us the chance to look upon chaos and, for the first time in a long while, to find ourselves able to laugh at it after all. An enthusiastic audience was alive to every nuance, every moment of slapstick and buffoonery delivered with perfect timing by a hard-working cast.

The Play That Goes Wrong will be wreaking havoc across venues on its UK tour until late November – details here.