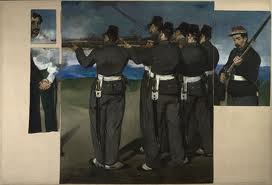 I watched Andrew Graham-Dixon’s programme, Who Killed Caravaggio? on BBC4 over the weekend. Caravaggio’s life (and death) are shrouded in violence, mystery, and a good deal of moodily-lit art.

Whilst the programme was interesting, it did make me think: does it matter ? By which I mean, does it matter to an appreciation of his art, solving the mystery of how and why he died ?

What we can forget, especially in the presence of great art – music, painting, literature or poetry – is that artists are like us: human. Caravaggio’s life was peppered with incidents (according to the programme) of sexual jealousy, a duel in which he killed his opponent, periods on the run, and artistic creativity. Like most people, Caravaggio was prey to the same desires, phobias and emotions as all of us: he just happened to paint as well. And rather brilliantly.

Of course, knowing that particular pictures were painted during a time when he was a fugitive and had to paint quickly, or that they were created in order to establish a reputation amongst the plethora of artists competing for attention at the time, can enhance or widen your perception of a painting.

But, ultimately, a work of art is experienced by meeting it at a particular moment, on your own terms. What led to its inception, the circumstances under which it was created, or its original intended audience or display-space: these factors don’t necessarily impact on the moment you view a painting or your reaction to experiencing it. They may inform your understanding, but your visceral or emotional reaction to it is perhaps beyond the biographical accounts of the artist’s life.

Graham-Dixon thinks that, after ten years of research, he has finally solved the mystery of Caravaggio’s death: murdered by one of the Knights of Jerusalem after he apparently escaped being imprisoned on Malta for sodomy. That’s all very worthy: but humanising him and investigating the facts of his life won’t add anything to his work for me. Like the work of great artists, no matter how human his story, Caravaggio’s art transcends all the squalor.