The fourth book in the developing Whitstable Pearl series of crime novels by Julie Wassmer, Murder on the Pilgrims Way, is a meditation on age, as perhaps is fitting for an evolving canon that, in this its fourth instalment, reaches a new level of maturity and literary accomplishment. 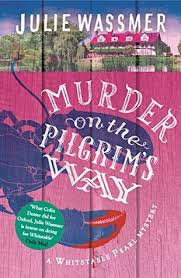 Taking her heroine out of both her seaside town of Whitstable and her usual haunt of Canterbury, Wassmer instead opts to place her in an idyllic rural retreat near Chartham, setting the scene for that classic of the crime genre, the Country House Murder. It is a bold move, placing the book directly in the lineage of a British literay tradition reaching from Agatha Christie, Dorothy L Sayers and J Jefferson Farjeon to later luminaries such as PD James and Reginald Hill. This affords plenty of opportunities for vivid description of rural scenes and lakeside trysts which perfectly capture the lazy haze of an English countryside lulled by summer’s warmth, as well as giving Wassmer the opportunity to explore a more focused arena.

The preoccupation with age and the impact of growing older is an element which operates beneath the novel’s surface, but underpins the narrative, in particular the gradual evolution of the character of its heroine, private detective-cum-restaurant owner, Pearl Nolan. This time, we see her struggling to come to terms with her own growing redundancy both to her restaurant, which is increasingly able to manage without her, and to her son, Charlie, who is living an independent life studying at university, but who returns occasionally to work at the restaurant, thereby bringing together and magnifying those two elements which are the focus of Pearl’s life, but which are able to function without her involvement. Pearl is acutely aware of this herself, at one point reflecting that ‘having turned forty she felt as if she was entering a new era, the second act of a play in which she was the main character, but unsure of her role.’ Elsewhere, other characters reflect that ‘that’s the nature of growing older, isn’t it ? Somehow our roles are always reversed.’ The central playboy character, Nico Caruso, is a celebrity chef who trades on his youthful good looks, contrasting with Marshall, the godfather to the lady who owns the country house at which the story unfolds, who is elderly and walks with a cane. The mill at Chartham, visible from the gardens of the estate, is ‘old enough to be mentioned in the Domesday Book;’ later in the novel, Old Harry, ‘the oldest bell in the Cathedral,’ is heard to ring. Excavations at a local field connected with medieval shipping unearth ‘an ancient boat…but apparently it disintegrated on contact with the air.’ The fragility of age, and of history, lies like the buried boat not far below the prose’s summer-hued surface as the world ‘old’ tolls like the cathedral bell throughout the novel.

The character who could provide meaningful focus for an increasingly isolated Pearl, but with whom she cannot quite make things happen, is DCI McGuire, with whom she has been fencing romantically since the first novel. McGuire is still wrestling with his status as an outsider, as a Down From Londoner, since his relocation to Canterbury, although for him this is ‘something behind which he could hide.’ The constant conflict between the local and the outsider is a recurrent theme throughout the books, and a useful means of generating tension both on the larger, social, scale, as well as between Pearl and McGuire themselves. McGuire, too, cannot escape the issue of aging, as he nostalgically reflects on ‘the lyrics to an old pop song’ and his floundering relationship with Pearl.

The classic plot device of assembling all the suspects together in one place for the final denouement, arising in a pleasingly organic manner from the nature of the novel’s central theme of a week-long cookery course, builds the tension nicely  towards the end and allows Pearl a dramatic moment to examine the motives, means and opportunity of all the suspects before solving the case, in a fashion reminiscent of Poirot wrapping things up on the Nile or the Orient Express.

Overall, this is a deeply satisfying novel that boldly positions itself in a classic crime fiction sub-genre, and which works all the better for it, giving it a unified concept and identity away from the hymnody in praise of Whitstable and its environs, a strong feature of the preceding books. Wassmer can’t quite resist celebrating her home-town, though (and why not); ‘one of the town’s greatest successes was its ability to adapt without sacrificing its inherently quirky nature,’ an observation which can also apply to Wassmer’s series of novels itself and which highlights what is proving to be one of its greatest strengths.

Murder on the Pilgrims Way is published by Constable / Little Brown Books.