All are very welcome to join us for the first of this term’s screening and discussion sessions, which will take place on Monday the 26th of October, 4.30-7pm, in Jarman 7. 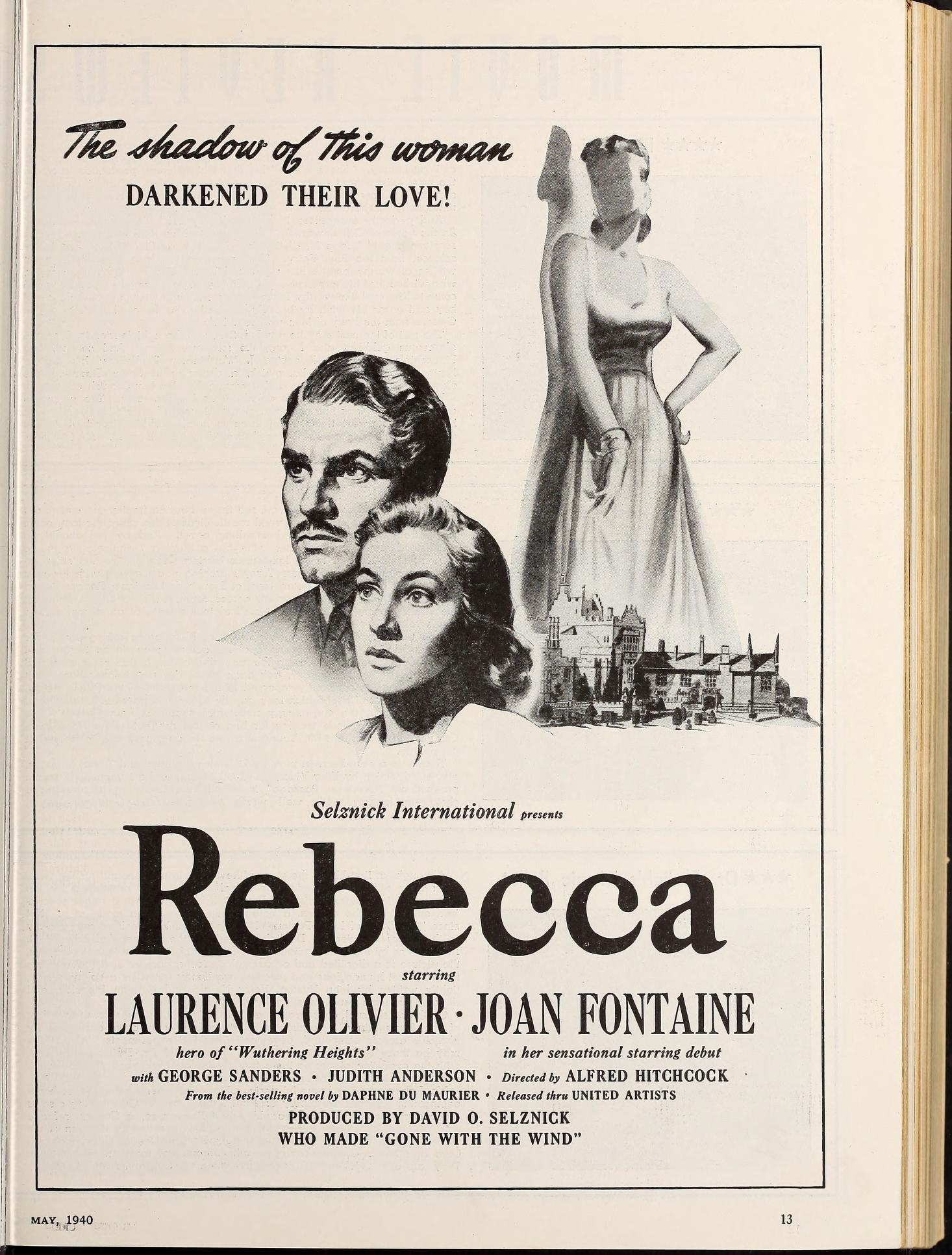 According to a review in the June 1940 issue of the Fan Magazine Hollywood, the film is the ‘story of a young bride who was haunted by the mystery and by the memory of her husband’s first wife, Rebecca’ (p. 16). Above is an advertisement for Rebecca from the May 1940 issue of the Fan Magazine Modern Screen (p. 12). The artwork and text of this advertisement keys us to several of the film’s melodramatic themes, adding to the information provided by the review. (You can find these, and other Fan Magazine treasures, on the wonderful Lantern search facility of the Media History Digital Library website: http://lantern.mediahist.org/)

The presence, and positon and size of the illustration of the two stars is instructive. The large head and shoulders portrait is placed centrally. The wide-eyed facial expression of the second Mrs De Winter is in keeping with the ‘woman in peril’ theme of the Gothic we are focusing on this term. Significantly, underneath the credits it is noted that this is the ‘sensational starring debut’ of Joan Fontaine. This chimes with her character’s naïve, unknowing initial state and her eagerness to uncover the truth.

Laurence Olivier is more straightforwardly billed as previously being the ‘hero’ of Wuthering Heights. Rebecca is also an adaptation, but of a more recent popular novel by Daphne Du Maurier. The illustration of Olivier is suitably moody given Maxim De Winter’s complex character and contrasts to Fontaine’s concerned expression.

A figure we might presume represents the first Mrs De Winter appears in the top right hand corner, and unlike the film’s stars she is afforded a full-length presence which shows off her evening gown, with a hand resting nonchalantly on her left hip. Her face is obscured into nothingness, however, heightening the sense of mystery. Our interest is further piqued by the tagline which focuses on the suffering of the couple: ‘The Shadow of this Woman DARKENED THEIR LOVE!’

The Manderley estate, the subject of Du Maurier’s novel’s famous opening line, ‘Last night I dreamt I went to Manderley again’, is also prominently placed. This is seen just underneath the looming figure of Rebecca, indicating that she continues to ‘haunt’ the house.

Do join us if you can – the intersection of stardom, male and female relations, Gothic tropes and domestic space will provide lots of food for thought.

You can find more information on these articles on our additional blog (https://melodramaresearchgroupextra.wordpress.com/) or email me at  sp458@kent.ac.uk