Lies has very kindly provided this summary of our discussion on Stella Dallas: 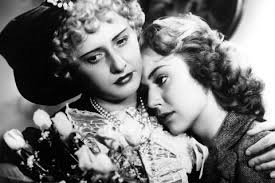 Firstly, we discussed the way the film depicts social mobility and its (im)possibility within the supposedly democratic American society of the time. Stella achieves upward social mobility through a respectable marriage to a wealthy man, which is the end goal of many films (The Bride Wore Red comes to mind) but instead of ending on a kiss and a promise of happily ever after, Stella Dallas shows the aftermath of such a match. Stella’s difference from Stephen (and from members of his class) is expressed through her behaviour, her clothes and even, perhaps, her choice in beverage; we discussed her repeated mention of sarsaparilla and how this may be a preference connected to her working class status.

We linked this emphasis on social mobility or lack thereof particularly to the first and last images we get of Stella in the film. At the beginning, she is standing in her family home’s front yard looking out into the street and waiting to catch a glimpse of Stephen Dallas; both Dallas and the road are accessible and within her reach. At the end of the film, however, Stella is standing in the road, behind a fence and outside a closed 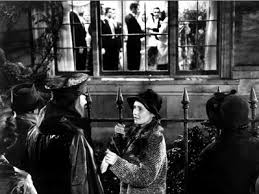 window, gazing at her daughter’s wedding, which is physically out of her reach. The wedding is also guarded by a policeman who eventually ushers Stella away. At the film’s beginning, therefore, social mobility (through Stephen) seems achievable, but at the end, it has been closed off to her, and she can only catch a glimpse of Stephen’s world from behind bars.

Nonetheless, we also remarked on Stella’s facial expression as she walks away from the window in the very last seconds of the film; she is sad, but also smiles and looks in a sense victorious. Although Stella has not achieved social mobility directly, she has done so indirectly through Laurel; her daughter has successfully entered Stephen’s world through her marriage to a wealthy man, thanks in part to Stella’s sacrifice. We remarked that this must have echoed the experience of many immigrants to the United States, who may not have personally been able to reap the gains of their decision but whose children and grandchildren received better future opportunities thanks to their immigration. 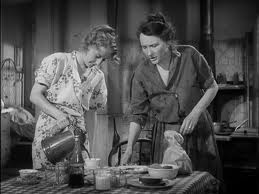 working class family and of Stella’s wishes for social mobility, this film reminded us in some ways of Love on the Dole, which we watched as a group some months ago. In this film, too, daughter Sally (Deborah Kerr) strives for social mobility, but does so through a clandestine relationship with an unattractive, older rich man instead of through legitimate marriage, as Stella does.

Finally, we remarked upon Barbara Stanwyck’s acting style, which has aged well and which is remarkably restrained, particularly for a film dealing with such strong emotional highs and lows – there was little of the excessive acting we have seen featured in some previous films. This is particularly interesting in terms of this film as a classic (maternal) melodrama, since the genre is often characterized by excessive emotion and exaggerated performances.

Many thanks to Lies for organising the screening of Stella Dallas and providing a wonderful introduction and great summary of our discussion.