All are very welcome to join us for the third  of this term’s Screening and Discussion sessions, which will take place on Monday the 22nd of February, 5-7pm, in Jarman 7.

We will be showing Frances’ choice The Stepford Wives (1975, Bryan Forbes, 115 mins). Frances has very kindly provided the following introduction: 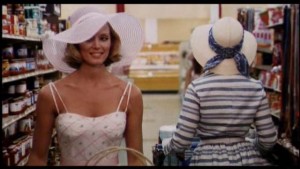 Bryan Forbes’s 1975 screen adaptation of The Stepford Wives may seem, at first, a long way away from the eerie shots of Manderley which open Rebecca (1940) or the exuberant period costume of Uncle Silas (1947), viewed during the last session. Indeed, The Stepford Wives opens in a modern New York apartment where our protagonist – Joanna – sits alone. Soon afterwards, Joanna and her family will be seen outside in the busy city and a man carrying a mannequin across the street captures Joanna’s eye as a keen photographer. The film’s beginning – with its emphasis on the bright, noisy and 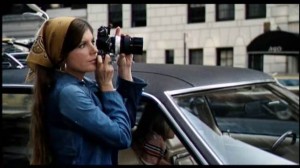 modern city, and Joanna’s role as a wife and mother as well as an inspiring professional photographer – appears to radically contrast the Gothic films discussed in previous weeks. Yet The Stepford Wives soon reveals how the tropes of the Gothic infuse this tale of horror set in a seemingly perfect suburban community. The film conveys the same Gothic anxieties of the menacing dark house, the suspicious husband and the investigative heroine whose well-being is very much jeopardized. The historical context into which The Stepford Wives was made and originally released supports these assertions: the film appears at the same time that Gothic fiction enjoyed a renewed interest, with Gothic novels – published in cheap paperback editions – were enormously popular, as beginning with Phyllis Whitney’s Thunder Heights in 1960.

However, the significance of The Stepford Wives resides not just within a contemporaneous interest in Gothic narratives, but also in how the film directly interrogates the socio-political context of the US in the 1970s using the Gothic mode. In 1963 Betty Friedan has published her influential The Feminine Mystique which explored the unhappiness of suburban housewives in the 1950s and 60s who struggled to find satisfaction from a life of domesticity and maternal duties. This is a central theme of The Stepford Wives: upon arrival Joanna is faced with beautiful women neighbours who are solely concerned with cleaning and cooking, whilst their husbands congregate for meetings of the ‘Stepford Men’s Association’. Joanna is unsettled by these occurrences and initially finds a kindred spirit in Bobbie who celebrates the sight of a messy kitchen. In this way, the rise of radical feminism in the 1960s and 70s in challenging gender stereotypes and traditional roles, and demanding legal and social change, should not just contextualise the viewer’s reading of the film, but clearly these progressive politics influenced the making of the film too. The politics of housework is explicitly mentioned in dialogue in the film, as is references to feminist movements, such as the women’s liberation movement in New York.

Anna Krugovoy Silver argues that it is precisely this political context which informs the film and its interaction with the Gothic tradition. Interestingly, Silver notes that Friedan did not like the film because it seemed to demonize all men in the active oppression of women (Silver, 2002). However Silver argues that The Stepford Wives does not simply parody feminist discourse, like Friedan’s, but rather the film seeks to interrogate the ideas being discussed by feminists at the time and force a spotlight on aspects which continued to be contentious issues for many women, such as marriage and housework. In this way, The Stepford Wives becomes an important ‘sociocultural document’ for 1970s America. Silver continues: ‘[The] Stepford Wives arose out of these feminist critiques of marriage, but rather than simply exploiting the feminist critique, as Friedan implies, the message of Forbes’s suburban gothic is consistent with that of many second wave feminists. His conclusions about the family are indebted to, and consequently reinforced, the popularization of feminist rhetoric and theory’ (2002).

The Gothic helps to illuminate the interactions between the film and its political messaging. For example, the threat from the male protagonist – which is often translated into the suspicious activities of the secretive husband in the 1940s Hollywood Gothics – now becomes the oppression of the murderous male community in The Stepford Wives. The role of the Gothic heroine in revealing secrets of the narratives as an active investigator becomes Joanna’s role in exposing male privilege and its 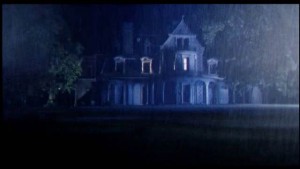 subjugation of women. And the presence of the old, dark house becomes a symbol for where such inequality emerges and is resisted by 1970s feminists and Joanna alike. As Silver observes, the film emphasises how ‘the patriarchy begins in the home’ (Silver, 2002).

Elyce Rae Helford also writes how The Stepford Wives engages with the political context of its making and highlights how the film is a contemporary of Laura Mulvey’s famous essay on ‘Visual Pleasure and Narrative Cinema’(Helford, 2006). The Stepford Wives helps to show how Mulvey’s work thus becomes another important historical document in the interaction between feminist movements and the creation of artworks, and in particular film. Helford’s comparison is interesting on another level too: The Stepford Wives appears to interrogate the idea of a male gaze, as the women in the film are – quite literally – formed in the shape deemed desirable to their husbands. This stands in tension with Joanna’s resistance against the Men’s Association and – on a metaphoric level – her role as a photographer and thus her control of the lens. This element of the film is of particular interest to the Melodrama Group’s wider discussion of representations of the Gothic heroine and the agency she has (or does not have) within the Gothic narrative. The Stepford Wives contributes to this conversation as the film presents the themes of looking, being watched and the female body as interwoven within the confines of a Gothic story which simultaneously speaks to the larger narrative of women’s rights and feminist movements of the 1970s.

Thanks Frances! And please note that due to the length of the film we will be starting promptly.