All are welcome to attend the fourth of this term’s screening and discussion sessions which will take place on the 6th of November in Keynes Seminar Room 6, from 4pm to 7pm.

We will be screening Kat’s choice: some episodes of the TV series American Horror Story. 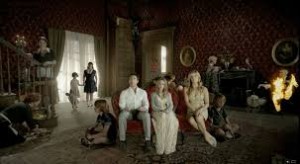 American Horror Story: Murder House is the first season of the television series, American Horror Story, which aired between 5th October and 21st December 2011. Produced by 20th Century Fox, American Horror Story was created by Brad Falchuk and Ryan Murphy.  The series received critical acclaim and won various awards including a Golden Globe for Jessica Lange as Best Supporting Actress.  Two more series have since been commissioned and aired, Asylum and Coven, the latter is currently showing both here and in the US.  The first season revolves around the Harmon family, Ben, Vivien and their teenage daughter Violet who move from Boston to a house in LA known to locals (but not to the Harmons) as the murder house.

Creators Murphy and Falchuk began working on American Horror Story before their Fox series Glee began production. Murphy wanted to do the opposite of what he had done previously and thus began work on the series. He stated, “I went from Nip/Tuck to Glee, so it made sense that I wanted to do something challenging and dark. And I always had loved as Brad had, the horror genre. So it just seemed natural for me.” Falchuk was intrigued by the idea of putting a different angle on the horror genre, stating their main goal in creating the series was to scare viewers. “You want people to be a little off balance afterwards.”

The dark tone of the series is modelled after the ABC soap opera, Dark Shadows, which Murphy’s grandmother forced him to watch when he was younger to toughen him up. He also citied The Amityville Horror and The Shining as influences for the series as well.

It doesn’t take much to persuade me to show anything horror related. However, there are, I think, particular reasons as to why American Horror Story is not only a good choice to show to the group, but also a great example of how horror can work with melodrama. Firstly, structure of a drama series. There has been a proliferation of horrific dramas on TV. Frances will look at this more in the next session, but recent TV has seen a rise in the  commercialisation of horror. Series such as True Blood, Walking Dead, American Gothic, The Following, Hannibal and Bates Hotel. Even Sleepy Hollow! For such series to work, there has to be more than just horror to enable the shows to sustain a lengthy episodic momentum.  As you can tell from the diversity of the examples, TV much more than the cinema, is the medium willing to take chances and experiment with the concept of horror.

American Horror Story: Murder House is an update on the Gothic melodrama format and as the title infers, focuses on all things horror and home that have seeped into American culture. This referencing of American popular culture, history and previous Gothic melodramas makes this first season extremely self-reflexive. The character of Constance is a great example of this.

The series intertwines real life murders such as The Black Dahlia with fictional narratives that places the home as the central force. The extent as to how central the house is, is evident by what is said in a later episode, “Don’t think that you own this house, the house owns you.” As with Gothic melodramas, the house is paramount in that it homes all past secrets that are waiting to be uncovered and you can see how films such as Amityville and The Shining have influenced the series. Secrets are also kept by the Harmon family. The family are under enormous emotional pressure as Vivien had miscarried and Ben had an affair before their move to LA. The melodrama revolves around the family’s relationships. Vivien believes her husband is responsible for her mental state and accuses him of trying to “gaslight” her. Jessica Lange’s character, Constance, is another example of how melodrama is employed in this series. Constance appears of another era, as if she’s walked straight from a Hollywood melodrama of a bygone time. It is Constance and the house that are stars of this series.

I haven’t included much further reading apart from an article from Hollywood Reporter that focuses on the popularity and success of recent horror dramas from American networks and stations.

Do join us if you can. And please note we hope to start promptly at 4.