All are very welcome to join us when we screen and discuss our next pre-code film. We will be showing Ladies They Talk About (1933, Howard Bretherton and William Keighley, 69 mins) on Tuesday the 27th of February, 5-7pm, in Jarman 6. 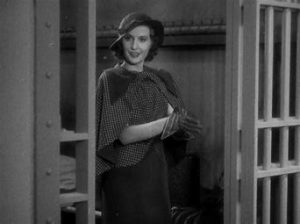 Like all of our most recent screenings, this is a Warner Brothers production. It also, like Baby Face, stars Barbara Stanwyck. She plays gangster’s moll, Nan Taylor, who is caught during a bank robbery but who appeals to old male classmate David Slade (Preston Foster) for help. David is now a radio evangelist, intent on just punishment for criminals, but agrees to help Nan. Despite David’s intervention, Nan is sent too San Quentin prison where she meets an array of fellow female convicts. Dramatic urgency is supplied by a thwarted escape, a shooting, and romance.

The film was later remade in 1942, starring Faye Emerson as the more aptly titled Lady Gangster (Robert Florey). Once more, as with Three on a Match and Broadway Musketeers, this affords us the opportunity of  comparing  pre and post-code treatments of a story.