The fourth film in the Gulbenkian Cinema’s Gothic Season – Ridley Scott’s Alien (1979) – screens on Monday 24th of February at 9.15 pm. It will be introduced by Melodrama Research Group member Frances Kamm. 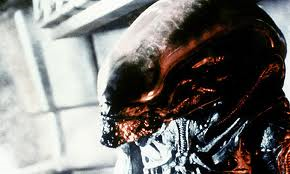 “In space, no one can hear you scream.” Ridley Scott’s (Bladerunner)  1979 modern classic stars a never-better Sigourney Weaver (Gorillas in the Mist) as Ripley, one of  several scientists on board the spaceship Nostromo, on the return leg of a  routine mission when they detect a mysterious transmission from a nearby  planet. Investigating the source, they find the remains of an alien creature  and crew member Kane (John Hurt) is attacked by the creature in one of its  eggs. Back on board, he has seemingly recovered when an uninvited guest  arrives, in gloriously gory fashion, in one of sci-fi’s most memorable  sequences.

The undisputed best of the Alien films, with a cerebral slant  alongside the thrills and gore, and an iconic feminist heroine in Weaver’s  preternaturally cool, tough Ripley, it’s a shocking, seamless ride.

“It  remains a benchmark of extra-terrestrial horror, and gave us a bona fide A-list  star in the shape of Sigourney Weaver” Film4.com

“One  of the greatest sci-fi movies ever made” Jamie Russell, BBC

For more information and to book your ticket please go to: http://www.thegulbenkian.co.uk/events/cinema/2014/February/2014-02-alien.html