All are very welcome to join us for the last meeting of term. On Monday the 12th of December, at 5-7pm, in Jarman 7 we will be screening the UK anthology film Dead of Night (1945, Alberto Cavalcanti, Charles Crichton, Robert Hamer and Basil Dearden, 102 mins). 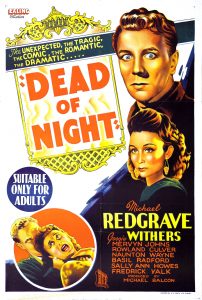 ‘How narrow is the margin between dreams and reality, the natural and the supernatural, fact or fiction, is graphically and dramatically shown in this Ealing Studios production based on original stories by H.G. Wells’. This intriguing opening to a Review of the film in Fan Magazine Screenland (August 1946, p. 12) poses these, as well as other philosophical quandaries, in its 5 linked gothic horror narratives. The anthology comprises ‘Hearse Driver’, ‘Christmas Party’, ‘Haunted Mirror’, ‘Golfing Story’ and, the arguably best known, ‘Ventriloquist’s Dummy’ sequence in which a sensitive ventriloquist (Michael Redgrave) comes to fear that his sinister dummy is actually alive.

Do join us for ‘engrossing film fare which really makes you think’ (Review in Screenland, August 1946, p. 12).

You can find the full review on the Media History Digital Library’s fantastic website: http://archive.org/stream/screenland501unse#page/n911/mode/2up

More information on Fan Magazines can be found on the University of Kent’s NoRMMA blog: http://www.normmanetwork.com/