The discussion prompted by Coquette focused on several areas: the definition of melodrama, especially in relation to content vs form; the film’s old-fashioned feel; comparison of Norma’s punishment to other female characters at the time and earlier; Mary Pickford’s star entrance; Pickford’s star image – from the Girl with the Curls to the Woman Without Them; Hollywood’s focus on youth; modern actresses and image changes; Pickford’s performance. 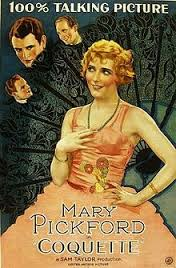 We began by relating the film to our previous experience of, and assumptions about, melodrama. The basic story has many melodramatic elements.  The central character is a young woman named Norma (played by Mary Pickford) whose reputation is at stake.  A misunderstanding leads to Norma’s lover Michael (played by Johnny Mack Brown) being shot by her father and a death-bed scene. This results in a murder trial where Norma attempts to save her father’s life by perjuring herself. She tries to convince the court that Michael raped her, therefore providing her father with a reason for his action. 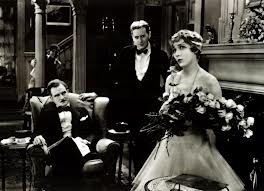 However the storytelling is not very melodramatic. The film did not follow the theme of concealment and revelation we have noted in other melodramas. A key example of this is the fact that Norma told her brother, and the audience, of her intention to lie on the witness stand. This meant we were not left in suspense as to how she might react. In addition, while Norma and Michael’s separation is presumably meant to be very distressing to both of them, the film does not convey this strongly.  We also thought that Norma’s long-standing, and older, admirer Stanley (Matt Moore) might have played a larger part in the film, providing the third point of a melodramatic triangle. This was not the case.

The difference between the film’s content and its form (primarily its plotting–both overall and within scenes) is therefore important. Since the story has melodramatic elements but the plotting does not highlight this, might we consider the film to be intended as melodrama, but simply not very effective? Or does the lack of suspense in terms of concealment and revelation preclude us from considering it to be melodrama at all? Of course this assessment of ‘quality’ rests on our judgment today, and views at the time might well have been different.

Coquette was based on relatively recent (1927) play of the same name by George Abbot and Ann Preston Bridgers. The film’s contemporaneous (to its release) setting is foregrounded by long-held close-ups of invitations to dances in 1928. However, we thought the film seemed old-fashioned for its time. The ‘feel’ was compared to that of Pleasantville (1998) in which the two main characters from the 1990s find themselves inhabiting a chirpy 1950s America. 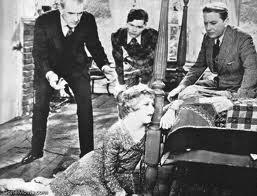 character. Norma’s ‘sins’ are small. She has spent the night, unchaperoned, with the man she loves in a cabin. Nothing happened between them. Yet she is severely punished: her lover is shot dead; she feels compelled to paint a very negative view of his character in order to help her father be acquitted of a murder charge; she witnesses her father’s suicide at his trial. 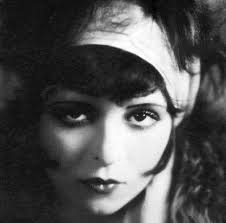 The New Woman was already well established in Hollywood films by this time. Colleen Moore played the definitive flapper in Flaming Youth six years earlier, and Clara Bow appeared to have It in 1927. Compared to these, and others, and especially given the fact that Norma’s sins are fairly insignificant – she is a coquette, or a flirt after all, not a ‘bad’ woman or a prostitute – the film seems out of its time.

We connected this strongly to Mary Pickford’s star image. The film was presenting a ‘new’ Mary one who way ‘bobbed, audible and coquettish’ according to Photoplay in May 1929. We spoke at some length about Pickford’s star entrance. Norma is referred to, but 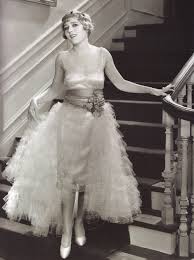 not seen, for some time. Immediately before we see her she is being joshed by her brother Jimmy about spending too long in front of the mirror. We only hear her voice to begin with. This is frustrating on two counts – the quality of Pickford’s voice is less assured than those of the other actors (though there may also be some microphone issues) and our sight of her is delayed. When she does appear though, she is very striking. As well as the new hairstyle, Pickford is wearing a beautiful modern dress. While this is modest in some ways the flimsy material focuses attention on her legs.

The way youth was used to ‘sell’ stars and films was seen in the Photoplay piece and has been the subject of academic work. (See Heather Addison. “” Must the Players 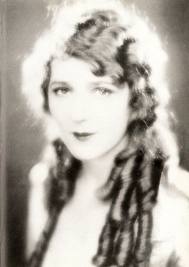 Keep Young?”: Early Hollywood’s Cult of Youth.” Cinema Journal 45.4 (2006): 3-25.) It was thought that this new image was not thoroughly modern as perhaps Pickford could not risk alienating her established fan base. Much of her previous appeal had been predicated upon recognition of her as ‘Little Mary’ or the ‘Girl with the Curls’.  This relies on a very different presentation of youth.  It is also at odds with the fact Pickford’s capability as a businesswoman (a co-founder of United Artists) and her private life – her happy marriage to Douglas Fairbanks – were continually dealt with in the press.

Gaylyn Studlar has written that Pickford appealed to the, in some ways already vanished, Victorian notion of childhood and its excessive sentimentality. (See Gaylyn  Studlar, “Oh,” Doll Divine”: Mary Pickford, Masquerade, and the Pedophilic Gaze.” Camera Obscura 16.3 (2001): 196-227.) As Studlar pondered the audience for Pickford’s silent films we were also curious as to the intended and actual audience for Coquette. The appeal to the modern seen in Photoplay’s focus on consumption was severely compromised by the film itself. Although Pickford was indeed ‘bobbed, audible and coquettish’ she did not seem young: Norma/Pickford was not seen engaging in the frantic dancing of the other youths in the film. The moralistic tone of the play – there is no happy ending which is unusual for other melodramas of this, and an earlier, period – seemed unlikely to sit well with those who had seen It and Flaming Youth. 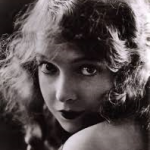 We broadened out the discussion to some others of Pickford’s contemporaries. While Moore and Bow symbolised the new, Lillian Gish, like Pickford, was of the past. However Lillian Gish’s appeal, while also based on innocence, was not dependant on her occupying a child’s role. The playing of child roles seemed very particular to Pickford.  Gish was far more often a child-woman. As early as 1920 she was playing single mother in Way Down East.

Some modern actresses who have noticeably had a ‘statement’ haircut in order to break free from their earlier star images were also mentioned: Harry Potter’s Emma Watson and Miley ‘Hannah Montana’ Cyrus.  We also cited several actresses who, like the 37 year-old Pickford in Coquette, have played, or continue to play, younger than their actual age. These included Alyson Hannigan, Charisma Carpenter and Natalie Portman. 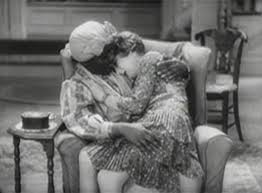 The change in Pickford’s hairstyle was clearly significant, yet the nod to the modern was not extended to the film’s treatment of her character’s morality and behaviour or indeed Pickford’s acting style. At times Norma seemed very young. She climbed onto the lap of the maid (Louise Beavers) to be comforted. Pickford’s acting was occasionally heavy handed. The moment Norma feels an excessive pain in her chest which she takes to correspond to Michael being shot was particularly memorable since Pickford clutches her chest with such violence. Norma was also, unsurprisingly, hysterical on learning of her lover’s death.

Instances of the overtly dramatic sat uncomfortably with some of the film’s, few, lighter moments. One of these seems to in itself be mocking, or at the very least drawing attention to, melodramatic performance.  Michael reacts to one situation with a moody and long-held stare. Norma/Pickford waits a little while, and then looks to the audience. The gaze then turns back to Michael with Norma/Pickford seeming to wonder at how Michael has managed to keep the pose for so long. Pickford’s performance within a performance is referenced throughout by one of her repeated gestures. After saying the word ‘adorable’ (whether to her admirer Stanley or her lover Michael) she places 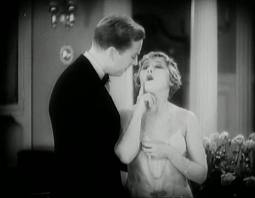 her finger to her lip in a coquettish way, prompting others to kiss her.  It is noticeable that when Norma/Pickford utters the word ‘adorable’ for the last time in the film, it is not accompanied by the gesture. The events Norma has been through have perhaps finally broken her meaning that any coquettish behaviour would be out of place.

Many thanks to Tamar for suggesting a film which provoked so much discussion.