The post-screening discussion focused on several areas:  suspense and the theme of concealment and revelation; matters of genre and cycles – especially film noir and melodrama; the main female character Jackie/Abigail; the star images of Deanna Durbin and Gene Kelly; costume; Somerset Maugham; a few specific scenes; other related films. 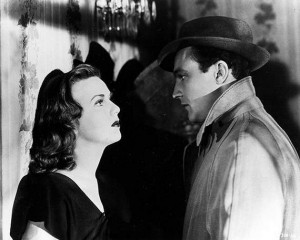 We began by examining the film’s flashback structure. While the fractured approach to storytelling was not unusual for the time, especially in film noir, we found the way the film presented the narrative very odd. After the initial framing narrative of Charles Mason (Dean Harens), a Lieutenant on leave who ends up holidaying in New Orleans at Christmas, the main story begins. Jackie (formerly Abigail, played by Deanna Durbin) shares her life story with her new friend Lieutenant Mason.  She very quickly reveals the reason for her sadness, and her name change: her husband Robert Manette (played by Gene Kelly) is in prison, serving life for murder.

The fact that Jackie is explicit regarding her husband’s guilt and his crime (though not the motivation for it) so early in the film means that little suspense is created until the shoot-out at the film’s conclusion. Following the first flashback, which shows the consequences of Robert’s crime on family life, further flashbacks are provided. These detail Abigail and Robert’s first meeting, some of their subsequent dates, and Abigail’s 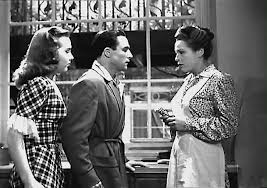 introduction to Robert’s omnipresent mother (played by Gale Sondergaard). Suspense would have been generated by just a slight reticence on Jackie’s part regarding the reason for her distressed state and a reordering of the flashbacks so that they occurred largely chronologically: the first date, subsequent dates, the revelation of Robert’s guilt etc.

While flashbacks and voice-over narration are key to film noir (whether we consider it to be a genre or a cycle) we noted that this lack of suspense did not relate to our experience of the genre/cycle. It also did not seem especially connected to melodrama’s often used theme of concealment and revelation. Of course, genre is often hybridised and any attempt to categorise a film as belonging to one genre or another based on whether certain elements are present is fairly restrictive. However we found it useful to relate other aspects of the film – mostly character – to genre.

It is fairly unusual for film noir to contain a female voice-over, to tell, and to show, the woman’s story. Jackie/Abigail is also treated sympathetically, partly because the rottenness of Robert is so evident. She is not a femme fatale. Robert’s mother is far more sinister. She is a malevolent presence throughout (even, or perhaps especially, whilst knitting in the background) despite welcoming Abigail as Robert’s last hope of salvation. However after the court case she provides one of the film’s most dramatic moments. She berates Abigail for her weakness, shouting ‘You killed him’ and 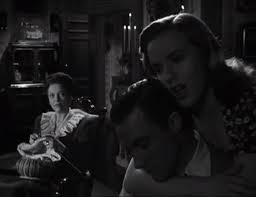 slapping her in the face. This is not just dramatic but inaccurate – Robert is soon to be sentenced to life imprisonment, but not to death. It also seems unfair on Abigail when it is clear that Robert’s life has been heavily influenced by his unhealthily close relationship to his mother. This point is also stated in the voice-over when Jackie reveals that it was described by a psychiatrist as ‘pathological’.

The focus on Jackie/Abigail is highlighted by the trailer’s promotion of   Durbin playing ‘The Screen’s Greatest Woman’s Role’. This confuses some of the usual (admittedly binary) gender distinctions of noir as being  ‘male’ oriented   and melodrama as ‘female’ focused – both in terms of character and audience. The melodrama research group has, of course, seen the sheer variety of melodrama over the last year which shows that the narrow view of melodrama as ‘woman’s weepies’ is highly reductive and unproductive.

Another aspect of the film seemed unusual – 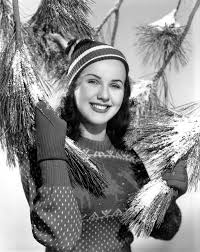 for both noir and melodrama. The film’s ending is rather hopeful. The recently widowed Jackie/Abigail looks to a sky in which the clouds are parting and there is a suggestion that she might find love with the supportive Lieutenant.  We related this optimism to Durbin’s star image. Given her hitherto fairly uncomplicated star image of a happy young girl who likes to sing it is noteworthy that this film allowed her to play two roles: the generally happy young wife and the woman ground down by life’s disappointments. Due to the flashback structure these were juxtaposed throughout the film, allowing for the foregrounding of Durbin’s performance. This means that after our first introduction to Jackie we are continually reminded of her ‘earlier’ self and of Durbin’s ‘earlier’ screen self – a happy young girl in love. 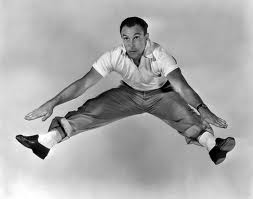 Gene Kelly’s star image was also discussed. While today we primarily associate him with song-and-dance roles, contemporary audiences saw him in a variety of roles before Christmas Holiday. These included musicals (Du Barry Was a Lady 1943) and dramas (For Me and My Girl 1942, Pilot #5 1943, The Cross of Lorraine 1943).  (This information on the films’ genres is courtesy of the American Film Institute Catalog and notes some films as ‘with songs’ rather than as musicals: http://www.afi.com/members/catalog/)

We talked quite a lot about the 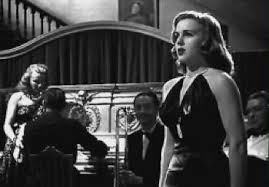 film’s costumes, especially Durbin’s wardrobe. She begins the film wearing a very glamorous and grown-up evening dress. This is striking as it is our first view of Jackie – and indeed of the ‘new’ Durbin. This is delayed, first by the framing narrative and then by the fact that Jackie/Durbin is first glimpsed with her back to the camera, making her way to the stage to perform a song.  Her next outfit was especially memorable. As Jackie and the Lieutenant sit talking in a café she is dressed in a light coloured trench coat and coordinating hat. Perhaps because of the film’s noirish elements, this reminded us of the detective figure in many 1940s films, and specifically of Humphrey Bogart. It is an especially interesting costume choice as this relation to the male star who played the protagonist of several noirs also 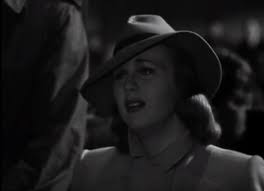 seems to place Jackie centrally. The wisecracking comments made by both Robert and Jackie were commented on. They reminded us of another film pair at times – Bogart and Lauren Bacall. Though it was notable that they did not interact in this way with each other since only Jackie, and not Abigail, has been made cynical by her experience.

The extent of Jackie’s suffering – being forced to turn to prostitution – is unsurprisingly not made explicit in the film. Hollywood’s Production Code meant that reference to this would not have been allowed by the censors. Somerset Maugham’s novel provided more information and it would be interesting to know just how widely the novel circulated in the United States. The trailer certainly foregrounds Maugham’s involvement.  We found it fruitful to briefly compare the adaptation of Christmas Holiday with Of Human Bondage (1934) which we watched at the beginning 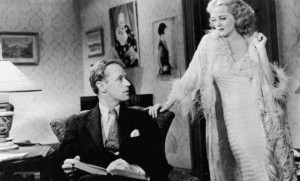 of term. The earlier, pre-code film, was able to mention Mildred’s descent into prostitution.  There is a key similarity, however.  Both adaptations extract just a small part of the novel, notably the part which deals more with the couple – which often occupies a main position in Hollywood films during the Studio Era. 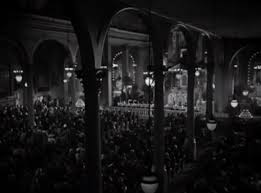 attendance at midnight mass and the Abigail’s earlier (though shown later in the film) first meeting with Robert in a cavernous concert hall. In the church Jackie is sobbing… we took this as a reference to her feelings of guilt. However she assures the Lieutenant that she is not crying for the reason that he (and perhaps we) think. The Concert hall scene later shows what Jackie had been crying about – her memory of Robert.

We also briefly discussed the director Robert Siodmak’s other films. Similarities in the plots of Christmas Holiday and Edgar G. Ulmer’s Detour (1945) were mentioned.

If you missed the screening, or would like to rewatch it, you can find it on youtube: http://www.youtube.com/watch?v=5UFSZay18go

After the discussion we watched a more festive Christmas film: Mickey’s Christmas Carol (1983). Bunny Mattinson’s short film managed to squeeze Charles Dickens’ novel into 20 minutes, but also managed to explore the relation between melodrama and comedy.

Thanks to everyone – especially Tamar, Ann-Marie and Geoff – for this week’s entertainment and provisions. Many thanks also to the entire Group for such a productive and fun term. Merry Christmas and a very Happy New Year!

All are welcome to attend the eighth, and last, of this term’s screening and discussion sessions which will take place on the 18th of December in Keynes Seminar Room 6, from 4pm to 7pm.

We will be screening Christmas Holiday (1944, Robert Siodmak, 93 mins). 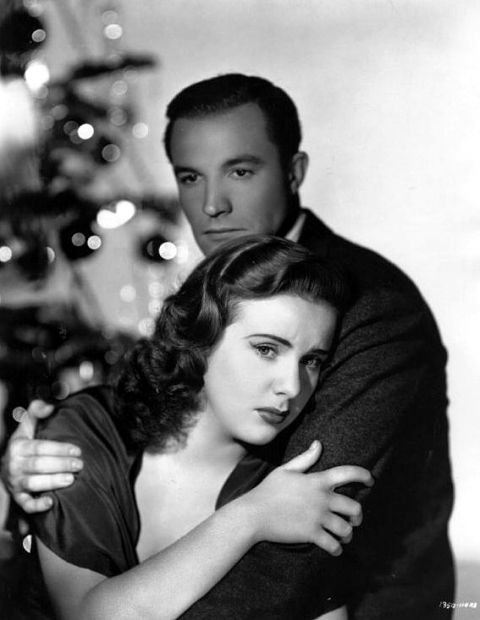 The Hollywood adaptation of the Somerset Maugham novel stars musical legends Deanna Durbin and Gene Kelly. The casting is misleading, however, as Universal studios was deliberately trying to insert some variation into Durbin’s hitherto relatively simple star image of a happy young girl who loved to sing. In Christmas Holiday Durbin plays a woman with a past (enough of one to need a new name), now working as a nightclub ‘hostess’.  We might compare Durbin’s change in role to the refreshing of Mary Pickford’s star image in Coquette (1929) which we screened a couple of weeks ago.

The film’s dark tone can be fruitfully related to its director as well as its stars.  Robert Siodmak later helmed the gothic-influenced The Spiral Staircase (1945) and The Dark Mirror (1946).

The trailer’s central placement of the change in Durbin’s star image as well as the highlighting of the film’s noirish tone  are also seen in the print advertising. Below are some pages from the June issue of trade-oriented Box Office Magazine. (The date of the magazine also points to the fact the film might be somewhat misnamed-who releases a festive film in July?!)

To see the pages below in context please visit http://www.boxoffice.com/the_vault/issue_page?issue_id=1944-6-17&page_no=19#page_start

The above pages (and lots of other useful material) can be found on the Box Office Magazine’s vault: http://www.boxoffice.com/the_vault

Do join us, if you can, for what promises to be an interesting discussion on the intersection of melodrama and noir. We also plan to screen a short bonus Christmas film (yet to be decided) afterwards, which will hopefully be more cheery!