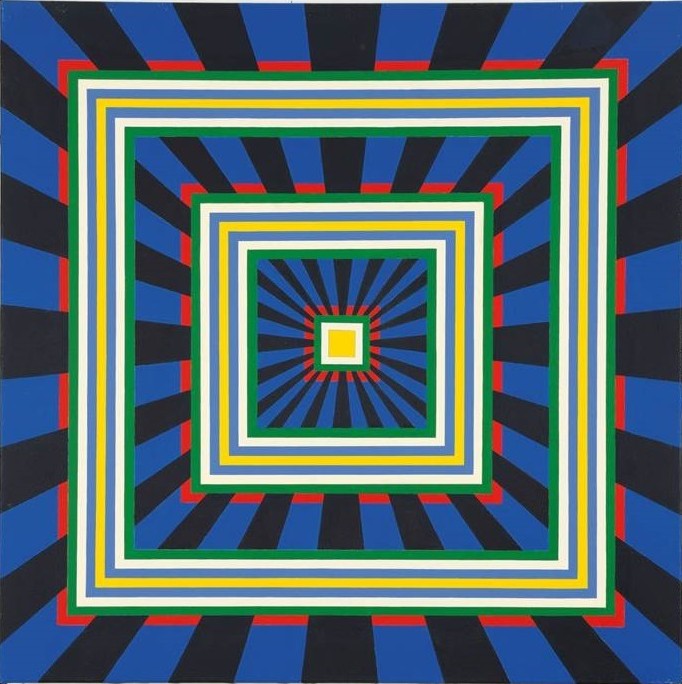 Palindrome: The Sixties Art of Brian Rice and Richard Rome

To mark our 50th Anniversary, the University of Kent is launched ‘My Generation: a Festival of British Art in the 1960s’. This series of three exhibitions was held across Kent during the first half of 2015 at Studio 3 Gallery (University of Kent, Canterbury Campus), Mascalls Gallery (Paddock Wood) and The Beaney House of Art and Knowledge (Canterbury). A catalogue featuring new essays from Professor Martin Hammer and Dr Ben Thomas surveying the work in these shows was also be published.

Palindrome: The Sixties Art of Brian Rice and Richard Rome

Studio 3 Gallery was delighted to present the first of these exhibitions titled ‘Palindrome: The Sixties Art of Brian Rice and Richard Rome’. This show looked back to the works made by the artists during the mid-1960s and featured a number of bold paintings and prints from Brian Rice, as well as Richard Rome’s impeccably finished sculptures and humorous and elegant working drawings.

Both artists developed their practices during formative years in the mid-sixties working in London’s vibrant and exciting art scene; Rice was such an exemplary sixties figure that Michelangelo Antonioni interviewed him while researching his film Blow Up. Rice and Rome responded to this eclectic urban environment and earlier Modernist influences including Constructivism, the Bauhaus, and the sculptures of Brancusi and Arp by developing bold, hard-edged and formal works that still demonstrate the attitudes of playfulness and experimentation that marked the decade.

According to Ben Thomas, Curator of Studio 3 Gallery, ‘this exhibition explores in depth the work of two extraordinary artists whose art is characteristic of the period of creativity and optimism when the University of Kent was founded. I am grateful to both artists, and also to the Redfern Gallery who have been our partners in realising this exhibition’.

Brian Rice (b. 1936) studied at Yeovil School of Art from 1952-56 and then Goldsmiths College, London from 1958-59 (A.C.T. London University 1959). Moving back to London from Somerset in 1962, Rice developed the abstract works that established his reputation nationally and internationally.  His work is held in over 60 museums and collections internationally and he has won multiple prizes including Arnolfini Gallery Open Painting Exhibition 1963, Westward Television Open Exhibition 1971, Millfield Open 2003, and the Evolver Prize 2007.

Richard Rome (b. 1943) has been creating subtle and technically astounding sculptures since the 1960s. These works often explore the ways in which figures can be represented in their environment. Rome has exhibited widely and completed a number of high profile public commissions including the Millennium Fountain in Cannizaro Park (Wimbledon). His work is included in many important collections including the Arts Council Collection, and the Art Institute of Chicago. Rome is a Fellow of the Royal British Society of Sculptors and an Honorary Fellow of the Royal College of Art.