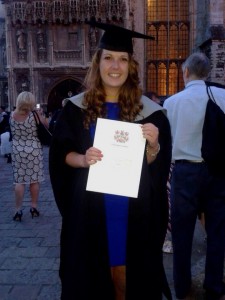 Sophie writes; “I’m really excited and honoured to be the first ever recipient of the Friend’s of MEMS studentship. I completed my undergraduate degree in History at Kent, which is where I discovered my love of medieval history. The Medieval and Early Modern Masters therefore seemed like the perfect way to carry on my studies and to explore an even wider range of specialist subjects that the course offers. The interdisciplinary nature of the course and its emphasis on research skills also really appealed to me, as it meant having the opportunity to learn skills such as Latin and Palaeography that will be vital in aiding the rest of my work. My particular research interest is in the production and content of medieval books, in particular liturgical and religious texts and the art and illuminations within them. I’m so excited and grateful to have the opportunity this year to explore this and many other subjects further and I’m really looking forward to everything that the year will bring!”

The conference will take place at the University of Kent, Canterbury, 10-12 April 2014.

This conference investigates the cultural, religious, foreign and domestic politics surrounding the Anglo-Spanish and Anglo-French marriage negotiations that dominated early Stuart policy, as James I sought a match with the great Catholic powers of Europe for his sons, Prince Henry and Prince Charles. The negotiations for an Anglo-Spanish match were first broached during the peace treaty of London in 1604, beginning a long process of protracted consultations between the two powers. Attempts to secure a Spanish bride for Prince Henry were seriously explored in 1611, but faltered two years later, when they were replaced with discussions for a French match (1613-16) or a Savoyard Match (1613-15). With Henry’s death, James I looked back to Spain for a marriage alliance for his younger son, Charles, in 1619. However, diplomatic negotiations ended at the close of 1623, when the Spanish match was substituted by one with France. The Anglo-French marriage treaty of November 1624 between Prince Charles and Henrietta Maria represented then a major shift in international allegiances. Yet, despite the initial hopes for an anti-Habsburg alliance with France, the Anglo-French match marked in fact the beginning of hostilities between the Houses of Stuart and Bourbon. Consequently, in both cases, the Anglo-Spanish and Anglo-French marriage negotiations were followed by a breakdown of diplomatic relations, as England found itself at war with both Spain (1624-1630) and France (1627-1629) at once.

Proposals are invited for individual papers or panels – for a list of all topics, as well as how to apply, please download the full conference poster here: EarlyStuart_CFP_Final-3

We’re pleased to welcome Mehmet Kalpakli, of the Department of History, Bilkent University, for today’s Research Seminar, ‘Social Networking During the “Age of Beloveds”: Parties, Poetry and Patronage‘. (This is a joint seminar with the Centre for Postcolonial Studies and the Medieval and Early Modern Studies Centre.)

The party (Meclis) —both as idealized in poetry and as performed at all levels of Ottoman society as a gathering for sociable enjoyment—is central to visualizing the structure and sense of Ottoman poetry. The actual meclis was the material representation of networks of mutual support among bonded individuals. Symmetrical social and emotional bonding between actors on different levels of power, as scripted and rehersed in the poetry and embodied in the meclis, has an economic as well as a social dimension.

The seminar takes place today, Thursday 24th October, at 5.00pm in Keynes Lecture Theatre 6. It will be followed by drinks in the English Common Room in the Rutherford Extension. All are welcome.

We’re pleased to announce the launch of a new joint research project – ‘Encounters with the Orient in Early Modern European Scholarship’ (EOS) funded by HERA (Humanities in the European Research Area) under the scheme Cultural Encounters. An associated conference will be held to launch this project on the 16th November in Leiden, which will be convened by Jan Loop – for registration details, please see http://400yearsarabic.weebly.com/learning-arabic.html.

The Collaborative Research Project is lead by Professor Charles Burnett and Dr Jan Loop, and it aims to document the scholarly encounter with the Orient between 1580 and 1800. It will 1) describe how the exchange of knowledge and of ideas between Europe and the Orient was organised and structured, 2) follow and compare the conceptual transformations which this encounter has initiated in Biblical studies, the study of religions, in the teaching and learning of Arabic and other Oriental languages, in literature and poetry, and in historical and anthropological thinking, and 3) document the change from a religious to a cultural perspective on Oriental societies. The project will fund a series of conferences, exhibitions and workshops over the three-year period.

The project start-date was 5 September, 2013, and it was launched with the opening of the exhibition 400 Years of Arabic Studies in the Netherlands at the Rijksmuseum van Oudheden, Leiden. (http://www.rmo.nl/english/), which is partly funded by HERA. On 16 November 2013, an international symposium will be held at the Rijksmuseum van Oudheden on The Learning and Teaching of Arabic in Early Modern Europe http://400yearsarabic.weebly.com/learning-arabic.html