Unsurprisingly quite a lot of our discussion on The Dark Mirror (1946) focused on the Doubling aspect. This was commented on in several ways:  in terms of psychology, technology, Olivia de Havilland’s –performance(s), costume, doubling in terms of our comparing to other films/narratives about the Double, and finally the fact that despite the centrality of the Double in terms of the twin sisters de Havilland plays, the power in the narrative rests with two authoritarian male characters: the police detective (Thomas Mitchell) and the psychologist (Lew Ayres).

We commented that the psychological theme of the film was established very early on – during the opening credits which played over a background of different Rorschach tests, or ink blot, pictures. This particular test, which is also present in the film’s narrative, especially commented on the theme of the double in terms of its own 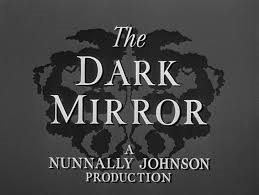 mirroring. It was noted that the particular pictures chosen also seemed to particularly relate to the twin theme central to the film’s narrative since some of the blots appeared to resemble wombs. The doubling theme is elaborated on in relation to the Rorschach test when both Ruth and Terry (both played by de Havilland) are seen to undergo this psychological test soon after one another, but with very different results.

The film’s use of technology while the two characters de Havilland plays appear simultaneously on the screen was praised, with only a few lighting differences obviously discernible. De Havilland’s performance(s) also aided the seamlessness. It was almost possible to forget that the actress played both parts, despite the fact the twins are identical.  Character differences were evident from the start – Ruth’s timidity was contrasted to Terry’s confidence. De Havilland’s playing of these early scenes was nuanced enough to indicate Ruth and Terry’s distinct personalities, without exaggerating them. As time progressed and Terry’s ‘evil’ nature was revealed de Havilland’s facial expressions in particular became more manic. It is impressive that de Havilland also managed to convey Ruth’s apparent descent into madness with a different touch. Terry was tricking her sister into believing she herself had gone insane.

De Havilland’s performance as Ruth therefore included expressions of bewilderment and fear in contrast to Terry’s planned and controlled scheming.

Costume also played an interesting role in aiding the audience’s attempt to differentiate the twins. The fact that no-one in the narrative is meant to know that there is more than one twin (the twins share a job selling magazines at a stand) explains some of their identical outfits.  It seems unlikely, however, that they would necessarily need to wear identical clothes at the same time. We also wondered why the twins shared a job.  Perhaps this has a practical application since one twin has, after all, we presume, 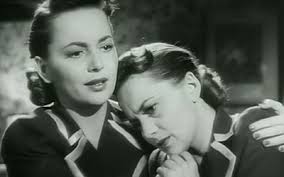 committed murder and might need to be fairly closely observed by the other.  Perhaps it also comments on a deeper psychological attachment. It is also the case that the twins wore the same clothes outside of work, even donning identical nightgowns. The identical costumes tailed off as the film progressed and by end evil Terry is seen all in black and innocent Ruth in a white top.

It is telling that one of the few physical ways the twins can be differentiated is by the use of jewellery. Both own a necklace with their name featured prominently, as well as initial brooches. When Terry is impersonating Ruth, it is even seen that Ruth (and presumably Terry) owns a compact mirror with her initial engraved on it. This was particularly noticed by the group as Terry removed it from her handbag after the Doctor had started to make clear he knew her real identity.  This was a very suspenseful moment – signalled, as was the case throughout the film – with dramatic music. In fact some of us thought Terry was about to brandish a gun. The necklaces, brooches and compact mirrors are items which can all be grouped under the term ‘women’s accoutrements’. Such accessories are sometimes sold, at times in connection with film stars, as ways of individuating oneself. The fact that this ‘female’ item, particularly one used to reflect on one’s appearance, is very significant. This is in terms of commenting on the theme of the double, but also because it is a replacement for the expected item – the arguably ‘male’ gun.

We noted a couple of aspects which we have previously discussed in terms of melodrama. The film’s dramatic music – and the fact that Terry uses a concealed music box to convince Ruth that the latter is going mad with auditory hallucinations – was noted. We also expressed views on the comic elements present in the film. These, usually related to the detective, seemed to sit uncomfortably with the seriousness of the film’s subject matter. They can be related to the presence of the comic subplot in some theatrical dramas – 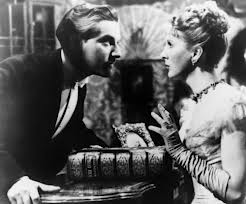 as evidenced in our read-through of the Melville Brothers’  A Girl’s Cross Roads (1903). More specifically, a connection can be made between Mitchell’s detective and the one played by Frank Pettingell in Thorold Dickinson’s British film version of Gaslight (1940). Interestingly this is another narrative about a relative (a husband in this case) trying to send a woman mad.

Finally we discussed the fact that while the film provided a great showcase for de Havilland and her dual performances, the men in the narrative were afforded far more power. This is seen in the ‘active’ occupations of both the detective and the psychologist. Furthermore this is directed towards proving the guilt of the twin who has killed, Terry, the least passive of the twins. By the end of the film we presume Terry will be institutionalised, while Ruth has been safely domesticated in a romance with the psychologist. 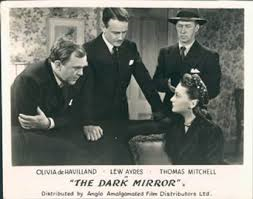 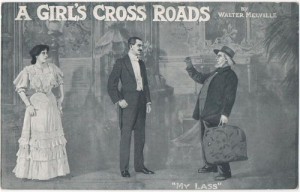 All are welcome to attend the fifth of the Summer Term’s discussion sessions, and our very first read-through, which will take place on the 5th of June, Jarman 7, from 5-7pm. 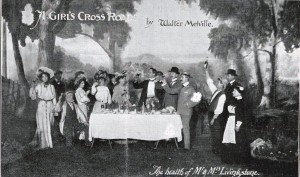 Jane is very kindly organising us for a read through of a melodrama play, and has provided the following information:

With a slightly different focus to our usual film-fare, this week we will be looking at an unpublished script for an early twentieth century stage melodrama, A Girl’s Cross Roads by Walter and Frederick Melville. The University’s Special Collections holds materials from the Melville family which reflect their influential standing in Victorian and Edwardian theatre.

The brothers Walter and Frederick Melville were part of the third generation of the Melville theatrical dynasty and, along with their four sisters and two brothers, were stalwarts of the stage as actors, directors, writers and owners and managers of theatres. Walter and Fred were particularly successful in London, where they owned and ran the Lyceum theatre from 1909 until 1939. They also had the Prince’s Theatre, Shaftesbury Avenue, built in 1911; this was later renamed the Shaftesbury Theatre.

The Melville brothers were hugely successful businessmen, eminently capable of producing hit dramas which pulled in the crowds. Their stock in trade was the winter pantomime, the details of which were famously kept a secret until the latest possible moment, and, of course, the Melville melodrama.

Although the Melvilles staged and adapted a number of popular melodramas in their time – including Sweeney Todd, East Lynne and The Count of Monte Cristo – it was a specific type of play for which Walter and Fred became particularly famous. These were called the ‘Bad Women’ dramas, since they usually portrayed an immoral woman, often one of the villains, in contrast to a morally upright though perhaps downtrodden heroine. Considering that these plays were hugely successful from c.1838-1912, when campaigns for women’s emancipation were gaining momentum, it might be thought that these plays were a comment on the times. Some audience members evidently thought so, since Walter was obliged to write to a newspaper to explain that he was not ‘a woman hater’. In fact, the roles which his plays offered to actresses could be far better roles than they could take in less controversial dramas. 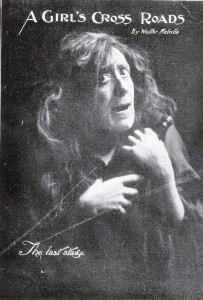 A Girl’s Cross Roads was first performed in 1903, probably at the Standard Theatre in Shoreditch. The plot tells the tale of Jack Livingstone, a well off gentleman, and his wife, Barbara Wade, a woman who is convinced that Jack made a mistake in marrying her.  Jack’s friend Dr. Weston, who tells the sad tale of a woman who drank herself to death, is sure that he’s seen that look on Barbara’s face before; meanwhile the girl whom both Weston and Jack were in love with (and perhaps still are), Constance, has decided to leave the countryside to make a new life in London. The villains of the piece are quick to take advantage of Barbara’s fears, leading her down a path from which there is no return. Running alongside the main plot and intersecting with the other characters, a father looks for his daughter only to be appalled by what he finds, and the comic couple Toby and Tilly try to make their way in the world. Moving from the English countryside to the heart of London, the play takes in themes of the time including alcoholism, murder, intrigue and extortion in the thrilling ride of a typical Melville melodrama with tragedy, comedy and expertly handled suspense. This particular play is interesting, since it deals with fewer absolutes in terms of morally right or wrong, and calls into question the simplistic expectations from the audience of the popular stage.

As far as we know, none of the Melville scripts, including the Bad Women dramas, have ever been published and there has been very little research into them. This read through on the 5th June will be the first time this play has been performed in any sense for a considerable time – perhaps since the last time it was performed on stage. This will be a great opportunity to return to the days of high melodrama and perhaps confront some of our perceptions of the stereotypical stage melodrama.

Do join us if you can, for a wonderful opportunity to actively engage with some melodrama history.