We are very pleased to welcome Patrick Pilkington of the University of Warwick’s Film and Television Department to the University of Kent. Patrick will present a talk entitled ‘Laws of Desire: The Courtroom Trial Sequence in Classical Hollywood Melodrama’ which will take place on the 15th of December, Marlowe  Lecture Theatre 2 (MLT2) , 5-7pm. 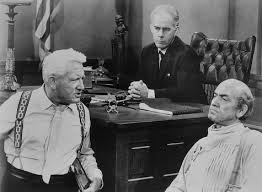 The trial sequence is a longstanding feature of Hollywood cinema’s narratives, from the silent era through to today. Despite a rich and varied history, the cinematic trial is most often associated with what Francis M. Nevins (1984) terms the “Golden Age” trial film, a small number of Hollywood productions made in the 1950s and 1960s that believe in and reinforce notions of a working, just system of law (for example: 12 Angry Men, To Kill a Mockingbird). I contrast this representational mode, focused on active, male protagonists – often in the role of the legal professional – with the depiction of the courtroom trial in a number of female-centred melodramas of the period that place a female protagonist on the stand. Paying special attention to films such as Written on the Wind (1956), Peyton Place (1957), and Madame X (1966), I locate a mode of representing the trial that is distinctly melodramatic in its emphases and conventions. The focus on the courtroom as a site of repression and revelation, and the designation of speech and silence during the trial, work alongside the employment of other conventions of melodrama including its hierarchical point-of-view and stylistic and narrative ‘excesses’. This produces a separate mode of representation that alternately works with and pushes against the conventions of trial depiction, giving voice to something other than a dominant, law-affirming point of view.

All are welcome to attend!