All are very welcome to join us for the first screening of the New Year, which will take place on the 26th of January, from 5-7pm,  in Jarman 7. We will start this term’s focus on the Gothic notion of The Double by showing The Dark Mirror (1946, Robert Siodmak, 85mins).

Made at a time when psychoanalysis found popularity in Hollywood films, The Dark Mirror tells the story of identical twins (both played by Olivia de Havilland) who are under suspicion of murder. 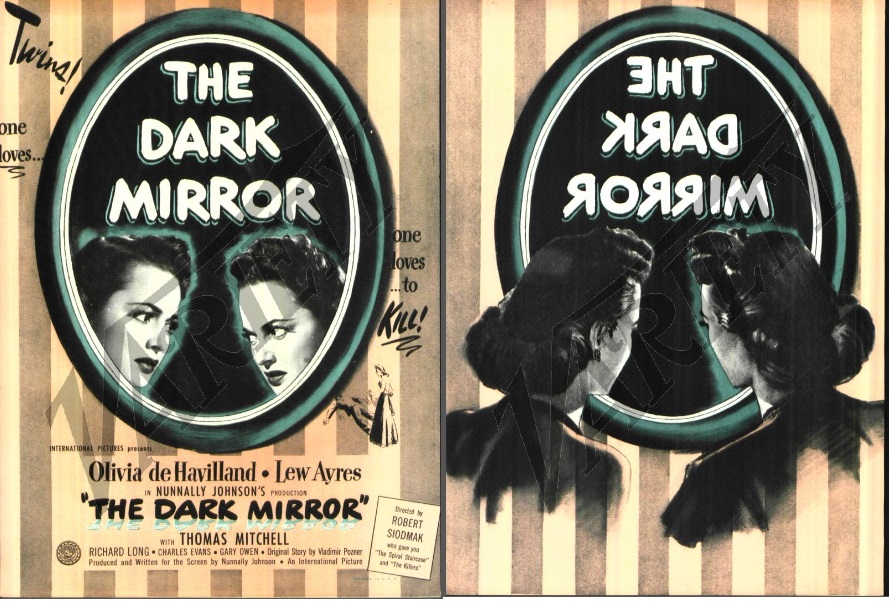 The above advertisement from Daily Variety (6th of November 1946) nicely sums up several ways in which the film references The Double.  Unsurprisingly it focuses on de Havilland’s dual role, increasing the already present doubling of actress and character. The left-side of the double-page advertisement comments on the perceived easy split in morality between good evil demonstrated in de Havilland’s contrasting facial expressions and the tagline: ‘Twins! One Loves…One Loves to Kill!’ Intriguingly the opposite page depicts the view from behind the mirror, invoking notions of spectatorship.

The film should prompt lots of discussion in these various areas, and more, with de Havilland’s acting providing a point of focus for comments on acting in melodrama.