I thought it might be useful over the Summer Break to delve into two areas relating to melodrama which we have yet to deal with in detail. Radio is a medium that we have not really discussed, and likewise the soap opera (with its melodramatic storylines, suffering characters and implausible coincidences) has been a little neglected. 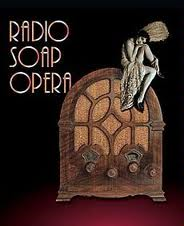 Television soap operas are popular in the UK, with soaps like Eastenders and Coronation Street continuing to top the ratings and to have a large presence in celebrity magazines. Soap operas also have an impressive history which spans several decades and a few different media. For example, Radio 4’s The Archers (an everyday story of country folk) has been going since 1950. Indeed, the very first soap operas were created for radio. This was during American radio’s ‘golden age’ which roughly coincides with Hollywood’s Studio System – the 1920s to the 1950s. 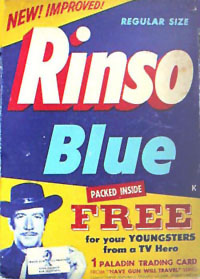 The term ‘soap opera’ itself comes from the advertisers who sponsored the radio programmes – such as Proctor and Gamble and Lever Brothers (Rinso – see picture on left). They were designed for female audiences, and often written by female writers. In particular they were meant to appeal to  housewives. The programmes were often 15 minutes long and could either be listened to whilst undertaking chores or when enjoying a short break from the housework. They were generally broadcast 5 days a week, had on-going storylines, constant cliff-hangers and revolved around women. The main female characters often suffered and had a special talent for self-sacrifice. 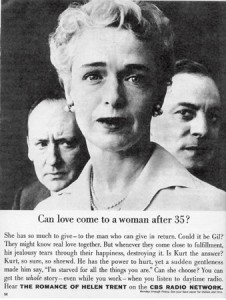 UPDATE: I’ve listened to some of the mp3s which I downloaded (these are brilliantly melodramatic!) and it seems, as ever with OTR, there is some mislabelling! The 3 parts of Helen Trent are probably in the right order, but I suspect there are episodes missing. Joyce Jordan’s episodes of the 25th and 26th have been switched (so do listen to the 26th first!), and those listed for the 27th and 28th are the same episode; which appears to be totally unrelated to the other two. The first 5 episodes of Hilltop House are consecutive though. I’ll update again if I notice any more…

As ever, log in to comment, or email me on sp458@kent.ac.uk to add your thoughts. And do get in touch if there is anything melodramatic you would like to post over the Summer Break…