All are welcome to attend the second of this term’s screening and discussion sessions which will take place on the 16th of October in Keynes Seminar Room 6, from 4pm to 7pm.

Rain, based on W. Somerset Maugham’s short story Miss Sadie Thompson, deals with the adventures of a group of travelers who are temporarily stranded on the South Pacific island of Pago Pago. As young prostitute Sadie Thompson (Joan Crawford), wanted in America for a crime that is never named, spends her time socializing with the US marines posted on the island, she becomes a thorn in the eye of fanatical preacher Alfred Davidson (Walter Huston), who decides she needs salvation. 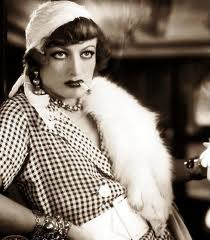 Although Joan Crawford was one of the key box office stars for the year 1932, the film was not a major hit at the time; Variety wrote that “It turns out to be a mistake to have assigned the Sadie Thompson role to Miss Crawford. It shows her off unfavorably. The dramatic significance of it all is beyond her range.” Motion Picture was kinder and pointed out that “a picture with such a long stage and screen history behind it starts with a handicap of inevitable comparisons”, calling Crawford “neither the greatest ‘Sadie Thompson’ of theatrical history, nor the worst by any means”. This review touches upon an important consideration in terms of Rain as a film, which is the fact that the story had previously been made into a play (1923) and into a silent film (1928, as Sadie Thompson). It would also be remade in 1953 with Rita Hayworth in the title role as Miss Sadie Thompson.

Crawford herself appears to have been on Variety’s side, and said in later years that she hoped “they burn every print of this turkey that is in existence”. She blamed the film’s issues on its writer and director, as well as on her younger self, who “took the bull by the horns and did my own Sadie Thompson. I was wrong every scene of the way”[1]. Despite this judgment even by its star, however, the film is one of Joan Crawford’s better-remembered early performances today.

Since both Of Human Bondage and Rain were written by the same author and made, as films, around the same time, they lend themselves quite well to a comparison of the performances and stardom of Bette Davis and Joan Crawford. These two stars have frequently been grouped together as similar types – both often playing, as Basinger puts it, “exaggerated”, extraordinary women, particularly in their later careers[2] – yet have also often been contrasted with each other as “the actress” (Davis) and “the star” (Crawford).

To watch (or re-watch) Crawford in Rain: http://archive.org/details/rain1932

Link to the original short story:

Link to the Swanson film:

Connected to last week’s question on radio versus film melodrama, how might melodramatic performance differ from silent to sound film? Is silent film, with its reliance on gesture and facial expression, particularly suited to the genre?

Do join us if you can, for what promises to be a very interesting and enjoyable film.