After running the screening session on American Horror Story, Kat has very kindly provided the following summary of our discussion: 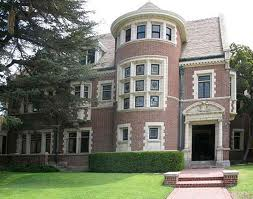 Throughout the session, a constant discussion point was the house, and the importance to the narrative. Many of us commented on the fact it was presented as a gothic house. Also how there was a strange sense of space. The geography of the house did not appear logical – this was mentioned in relation to when Ben’s phoney patient went to leave the house. The front door did not appear where you thought it should be. However, the audience are more aware of the space and the size of the cellar. This use of space to confuse added an unreal aspect to the house – much like The Shining. It was noted how space was beginning to become associated with individual characters and how there was a lack of action outside the space of the house – even in the garden! Some of us who had seen it revealed that the narrative does move to the garden later in the series. Also noted was the lack of possessions in the house – we could see no photos or personal ornaments. Is this important? Maybe the lack of possessions was representational of Ben and Vivienne’s relationship? Empty? The lack of lighting was discussed – how dark the house was lit, adding to the Gothic ambience. Ann-Marie shared that the house was also used in an episode of Buffy entitled “Fear, Itself”. It was observed how the opening of the first episode cut from murders at the house to Vivienne at her gynaecological appointment – making the link with house, procreation and birth. One of the group mentioned how important children and birth are to the narrative, more so as the series goes on and how Constance said how important a “good line” is.

The concept of and use of ghosts was discussed. It was remarked that there is a split (evident later in the series) between those who are malicious and those who are good. The point was made how the character of the ghosts were forged and cemented at the point when they were killed. Although this did not seem to be true for Moira who appears to have a split personality. There is a certain morality in Moira as well as a form of archaic womanhood as she says, it’s women who always cleans up the mess (which she does at the end of episode 2). There was also a discussion on ghosts and the spaces they inhabit. Do they get to go outside? Again, those of us who have watched the series mentioned the episode of Halloween (without giving away any plot spoilers!). 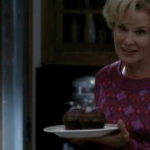 The style of the series was a point for discussion. It was suggested that the storyline involving the cupcake was very Hitchcockian – how the camera focused on the cake and its movement. It was reminiscent of the glass of milk in Notorious but also of Suspicion. The amount of male nakedness was a talking point! There appears to be much more of this than female nakedness. This appeared to be connected with Ben’s sadness and how his sadness is intertwined with his sexual desires. Notably in the scene where he masturbates and cries. The format of the series allowed for more risks in content and for more creativity in the horror/melodrama. The series could not just rely on horror, so there is an emphasis on the drama and melodrama. We invest in the family and, like a crime drama, we want to know what happens next. One of the group observed how revelatory each episode was – and that revelations were not just confined to episodes, but also in terms of ad breaks. You could tell where the ad breaks would occur and how the revelations would be formatted to allow for these breaks, which appeared very Dickensian, or reminiscent of how Dickens serialised his novels for weekly publication. The importance of editing was observed. There is a massive use of jump cuts, which adds to the unsettling nature of the series.

The violence of the series was noted. The excess of Vivienne’s attack on Ben when she finds him with the other woman – she strikes and cuts him with a knife. Also the replaying of Addie’s words “You’ll regret it” over this sequence. It provides a sense of foreboding. It appears as if a comment on modern relationships and how they are somewhat horrific and the split in the family which creates the horror. The focus on the family and the home and the idea of perfection and its attainment. The series appears to be providing commentary on the “all American dream” centred on the home (coded as gothic) and the family. Addie wants to look like a perfect girl and Tait was intended to be the perfect child. 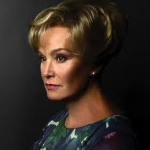 Jessica Lange’s Constance was a large focus of the discussion. She was discussed in terms of her allure, her power, her sexuality and as a mother. She appeared – through costume and how she spoke – as if a throwback from the 1950s. Constance is a melodramatic constructed woman as she could be from a Sirk film or a Bette Davis or Crawford vehicle. She has no qualms in calling Addie a mongoloid or a freak and locks her in the room of mirrors, which must be a horrific experience for Addie. But she is also very protective of Addie. Constance appears to be vested with some other worldly power which is part of her allure. She too was looking for the “perfect American life” in wanting to be an actress, which is how she came to be in LA.

Many thanks to Kat for organising a screening which led to much discussion, and for summarising it so well!