The splitting of Mildred Pierce into melodrama and film noir has been commented on by several writers. In particular Pam Cook (1978) has noted the broad separation into the bulk of the narrative which is narrated by Mildred and largely melodramatic, and the film noir elements.  In fact film noirs often include such a use of flashback narration – Billy Wilder’s Double Indemnity (1944) is a prime example. Such a clear separation is challenged by Steve Neale’s work on the way in which contemporaneous trade journals used the label ‘melodrama’. Neale asserts that the term was more often used in connection to films which contained ‘mystery, violence, chase’ (Neale 1993, p. 71). This relates closely to film noir. In addition, Linda Williams has proposed that melodrama is less a genre than a mode, and present in most Hollywood films (Williams, 2000). While it useful to further debate the various definitions of melodrama, it is clear that the film contains contrasting styles. We were particularly struck by the film’s opening. In this Wally Fay (Jack Carson) races around the beach house in which Mildred (Joan Crawford) has imprisoned him. We 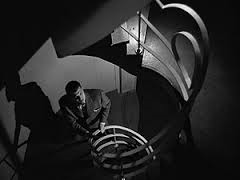 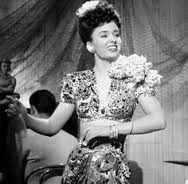 Michael Curtiz’ film was also discussed in relation to James M. Cain’s novel. It was noted that Curtiz’ film kept a flavour of Cain’s punchy social commentary. We were a little surprised that under Hollywood’s Production Code fairly obvious references to extra-marital sex and pregnancy were included.  The film was still, as Variety noted in its review, fairly cleaned up from the novel. While in Cain’s novel Veda became a successful opera singer – and therefore profited from her hideous behaviour – in Curtiz’ film she ends up a low-rent cabaret act. A more significant difference is Mildred’s response to finding her eldest daughter Veda (Ann Blyth) and Mildred’s second husband Monte (Zachary Scott) in a compromising position. In Cain’s novel Mildred is so enraged she attempts to strangle her daughter.  Such an understandable response is not present in Curtiz’ film, though.  Instead Mildred’s suffering sacrifice is played to the hilt. Mildred’s one refusal of Veda’s demands occurs when Veda has shot Monte dead. Mildred soon reconsiders, however, and is prepared to take responsibility for the crime herself.

Veda’s selfish behaviour can be usefully compared to that of Stella’s daughter Laurel in Stella Dallas (1937). In King Vidor’s film both mother and daughter make sacrifices. A telling scene takes place on the train. Stella and Laurel, lying in separate bunks, overhear the latter’s friends mocking Stella for her vulgarity. Each pretends they have not heard in order to protect the other. In Curtiz’ 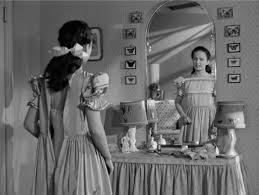 film Mildred alone overhears something significant: Veda’s ungrateful comment to her sister that she would not ‘be seen dead’ in the dress her mother has scrimped and saved to buy for her.  This is especially poignant as Mildred has sacrificed her marriage to Veda’s father in order to supply Veda with everything she desires rather than what she deserves. 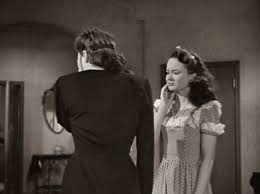 While Mildred’s accepting sacrifice in the face of such an ungrateful daughter in Curtiz’ film is perhaps less then believable, it was agreed that Ann Blyth superbly portrayed Veda’s venal nature. The film ably contrasts Veda to her sweet little sister Kay (Jo Ann Marlowe), whose death scene provides the film’s most distressing moment. We also noted the way in which the film managed to convey complex aspects of Mildred and Veda’s relationship. The repetition of a slap was commented on. The first time this occurs Mildred slaps Veda and, immediately overcome with guilt, profusely apologises. Towards the end of the film Veda slaps her mother. This second occurrence is far more shocking. Partly this is due to the heft of the slap and Mildred/Crawford’s fairly exaggerated physical recoil but it is also notable that Veda does not regret her action. This neatly comments on both the differences 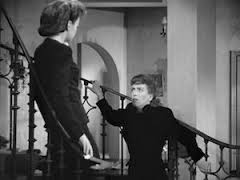 between the characters and the change in the dynamics of their relationship. The actresses’ costuming, hair and make-up parallel this change. As Veda grows up and Mildred becomes more business-like their outfits and hairstyles echo one another, foreshadowing that they are ‘squaring up’ for the next round of the fight.  We might ponder whether this mirroring is a statement on how much Mildred is responsible for Veda’s spoilt nature. 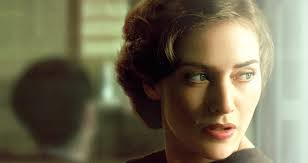 Joan Crawford’s performance was compared to Kate Winslet’s in the 2011 TV mini-series. Similarities were noted in the scenes where Mildred puts her children to bed.  In particular the tendency of both actresses to employ minimal mouth movement was commented on. However Crawford’s individuality was also a source of discussion. In addition to the seeming impossibility of her facial features – the severe cheekbones and large eyes and mouth – her wide shoulders were referenced.

Mildred’s progression from domesticity to high-powered business woman was also commented on. This was compared to the career woman in 1940s Hollywood film – most often in comedy, and portrayed with distinct flair by Rosalind Russell. But we also related it to Crawford’s own star image. In particular her films They All Kissed the Bride (1942) and The Damned Don’t Cry (1950) were mentioned. It was noted that at the time real shop girls were thought to identify with the shop girls portrayed by Crawford in sound films – such as in The Bride Wore Red (1937). It is worth noting, however, that despite the shop girl playing an important part in Crawford’s 1930s star image she actually played a variety of roles. (See Jeanine Basinger, A Woman’s View, 1993, pp. 171-173.) It was thought that perhaps the emphasis in fan magazines on how Crawford herself learned’ through films strengthened the connection.

In relation to Crawford’s star image 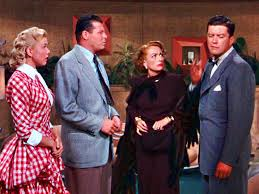 Tamar suggested  watching It’s a Great Feeling (1949) starring  Doris Day, Jack Carson (Wally Fay) and Dennis Morgan. In the film various Warner Bros. contract stars play up to their star images. Crawford in seen knitting in the background (apparently a hobby of hers) and then angrily berates and slaps Carson for no reason. Afterwards she smiles sweetly and replies to his asking her why she did it that ‘I do that in all my movies’. As with the assumption that Crawford ‘always’ played shop girls, this action which’ does in all her movies’ is in fact very specific. Crawford does not perform such an action in all, or even most, of her films.  Indeed it is largely a reference to Mildred Pierce. It is significant that a few years after the film’s release another film from the same studio posits such an action as an essential part of her star image.

We rounded up discussion with a mention of Johnny Guitar (1954). Significantly in Nicholas Ray’s film Crawford starred with the actress Mercedes McCambridge – with whom she reportedly feuded. This of course prompted thoughts on Bette Davis.  Ann-Marie provided some great behind the scenes information on the next film we will screen – The Old Maid (1939- see the next post!) and Davis’ feud with an actress other than Crawford: Miriam Hopkins.

Steve Neale, “Melo Talk: On the Meaning and Use of the Term ‘Melodrama’ in the American Trade Press”, The Velvet Light Trap, No. 32, 1993.

A clip of Crawford in It’s a Great Feeling:  https://www.youtube.com/watch?v=trGF6KrMAbA

Many thanks to Tamar for organising the screening and providing an excellent introduction.