Kat has very kindly provided the following excellent summary of our discussion on Dead Ringers (1988):

Never before has there been such a hushed silence post screening! Jeremy Irons knows how to wow an audience…..

The initial discussion focused not on the Mantle twins, but rather on the representation of women in the film, which was not wholly positive. The twins, but most often Eliot, were quite dismissive of women, despite the fact they are celebrated gynaecologists. They wonder at the spectacle of Claire’s “trifurcated cervix”, which in essence is a mutation of the cervix and by the end of the film Beverly only sees “mutant” women who require normalising. Women are represented as functional objects in the film; they are either portals of pleasure for the twins, or child bearers (once successfully treated by the Mantle twins). Even Claire Niveau is not constructed as a sympathetic character – it is challenging to engage and feel empathy with her, even when she realises she has been deceived into sexual relationships with both twins, thinking it was just one, 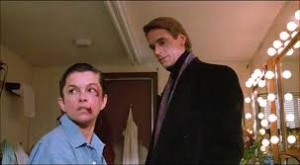 Beverly. Claire talks of how she wishes and needs to be humiliated in taking a role in a miniseries. A later scene where costumes are discussed for her character, Claire’s character is described in terms of being an “emotional hooker” . While in another scene, Claire is visited by Eliot whilst she is having her makeup applied for a scene in the mini-series. The audience is privileged to only one side of Claire’s face and when finally there is a full head shot, Claire’s make-up is to create the appearance of a woman beaten up – bruised and swollen eye and bruised lips and cheek. We discussed this as an externalisation of Claire’s emotions and how she feels she has been treated by Beverly and Eliot – as damaged as the supposedly “mutant” women, Beverly thinks he is treating.

Intertwined in the discussion surrounding the construction and representation of Claire, was an aside thread of the theme of art versus glamour (or art and glamour) in the film. There seemed to be a fine line between both. Beverly enjoyed watching “glamorous” shows on TV. However, there is a suggestion of gynaecology being a “work of art”, or at least a creative process that hints at the Mantle twins being perceived as “artists”. The theme is fully realised in the spectacle of the tools Beverly has made in order to treat “mutant” women that finish up displayed in the window of an art gallery.

This thread of the discussion on art/glamour developed into the role of colour, costume and the twins. We all agreed there was confusing representations of the twins in terms of when they undertook surgery. Beverly especially as it was normally he who undertook this work. As he was dressed in his scrubs, he would stand, arms out stretched, as if he was Christ like. However, their work in the process of the creation of life is more God-like, we thought.  Nonetheless, very religious imagery stood out against the grey 1980s colouring in the rest of the film. The conclusion was that this was a confusing and muddled aspect of their representation. The costumed scrubs appeared a little excessive for the narrative. We pointed out that the film is explicit in placing the film in 1988. However, the costumes for the surgery pulls it “out of time”, another puzzling part of the film. However, we agreed this did add to the horror and overall general creepiness. The colour red stood out against the grey, even though we didn’t consider it practical for surgery! There was something priest like, or inquisitional regarding the costume and colour here.

In discussing the doubling trope of the twins, it was observed that even though we were privileged with knowing they were twins from the beginning, there were certain scenes in the film when it wasn’t made explicit which twin we were watching. So, the film succeeded in creating suspense in the twins’ identities by denying the audience knowledge of individual identity.

The final point of the discussion was on the idea of male hysteria. It was noted there are previous examples of the double in the relation to the female example in relation to the double. For example, Black Swan and The Yellow Wallpaper. There are references to female identity with Beverly and Eliot, their names for one. Here we pondered on the idea as to whether here is a feminised hysteria in the construction of the Mantle twins. Beverly appeared “weaker” than Eliot and we view him as the more feminised twin. Also, their job is to give life, as if “mother”, but from the beginning there is the notion of “no touching” of the revering of how fish procreate – underwater and again, with no touching. Are they the mutants for suffering from a feminised hysteria?

Thanks for a great summary, Kat. Your final question is certainly one to ponder!