All are welcome to attend the last of the Summer Term’s screening and discussion sessions, which will take place on the 12th of June, Jarman 7, from 4-7pm. 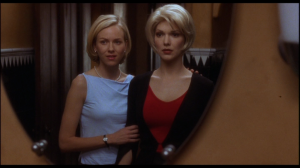 Mulholland Drive is a 2001 feature directed by David Lynch. The narrative of the film is convoluted to say the least but the story is roughly divided into two sections where we follow the actions of the two main female protagonists: Betty and Rita in the first, and Diane and Camilla in the second (played by Naomi Watts and Laura Harring respectively). The film’s narrative (or should that be narratives?) tells a story which incorporates an assortment of themes, drawing upon several generic conventions. In the first half of the film, the search for lost identity is the narrative’s central motivation as aspiring actress Betty attempts to help the amnesiac Rita discover her true name. The representations of betrayal, thwarted lovers and corruption which subtly underpin the events of this first section come to the fore in the second half of the film when our characters transform into Diane and Camilla: the estranged lovers. The women’s interactions with each other are interspersed with scenes depicting the action of several supporting characters including: the director Adam Kesher; his mother and/or Betty’s landlady Coco; the mysterious diners at Winkies who discuss the disturbing dream; and the enigmatic character known only as The Cowboy. How these secondary narratives relate to the story as a whole remains ambiguous as the film evokes genres as diverse as the detective film, thrillers, film noir, romance and, I would like to argue, melodrama.

Part of the narrative’s mystery may stem from the film’s production history, which reveals how Mulholland Drive was originally conceived as a project for television (much like Lynch’s successful series Twin Peaks). When TV executives rejected the project, Lynch filmed an ending to his pilot episode and released it as a much shorter story and feature film. Mulholland Drive also shows the development of several themes Lynch explored in his previous film oeuvre, particularly Lost Highway (1997). Lost Highway is similarly divided into two sections where some actors perform more than one role and the causal relationship between these narratives can be interpreted in several ways. Like Mulholland Drive, Lost Highway concentrates on the confusion created by lost memory, the mistrust evoked by betrayed lovers and a seedy underworld (in this case involving drugs, pornography and gangsters) which seems to seep into the lives of all characters portrayed. Viewed in this way, Mulholland Drive is very much a sister film to its predecessor but with one important difference: in Mulholland Drive the main 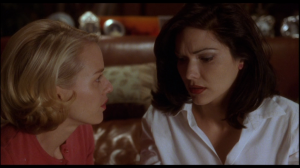 protagonists at the core of both segments of the film are women. This new emphasis upon a female experience is emphasised by the use of the same actresses in the key roles, their dominance in the narrative’s progression and screen-time, and the lesbian relationship which developments between Betty and Rita/Diane and Camilla. It is in this way that Mulholland Drive begins to evoke the ideas of melodrama discussed by the Research Group thus far and, specifically, the reoccurring trope of the suffering woman.

Lynch’s work has been equated with melodrama before, particularly as his films often seek to expose the illusory nature of US suburban culture: Blue Velvet’s (1986) depiction of the perversion which infects the seemingly perfect town of Lumberton is a good example of this. Mulholland Drive certainly develops this theme further but transforms this evil force into the morally corrupt corporations of Hollywood, where Betty hopes to find her big break. Mulholland Drive appears to consciously evoke the ideas 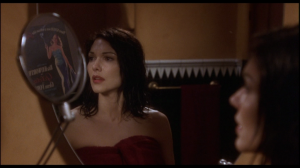 associated with Hollywood melodrama both in its ‘real’ plot (a betrayed lover) and the movie-making featured within the story (in a nice homage to the 1950s). The film’s plot is consistently ‘melodramatic’ but these moments of excess are uncomfortably controlled: often moments of confrontation do not culminate in the explosive emotional responses expected and Lynch’s camera is often very slow to reveal the important information occurring in a scene or, conversely, concentrates on images which appear to have no significance at all. The unusual pacing of the film is of course reflected in the film’s denial to provide a satisfactory explanation of its narrative. It is partly for these reasons that Lynda Chapple argues for a reading of the film which concentrates on other components: in this case, costume. Chapple relates the film’s use of costume – another topic commonly discussed under the heading of melodrama – to the representation of the female characters: “the costuming practices in this film exemplify a crisis of identification within a specifically feminine cinematic image” (p.322). (For more information on Chapple’s article visit http://melodramaresearchgroupextra.wordpress.com/)

One of the major questions posed by Mulholland Drive is whether the events we are watching actually took place, or are they a dream or fantasy taking place in one of the protagonist’s minds, particularly Betty’s/Diane’s? In this way the film presents an alternative representation for female subjectivity and the feminine experience to those featured in other melodramas which focus primarily on women. Considering the film to be (at least in part) the subjective experience of a protagonist extends the discussion on female subjectivity, as raised in previous films discussed like Gaslight. Other questions which could be considered when watching the film are:

– How does Mulholland Drive’s narrative ambiguity affect our experience of the film as a melodrama?

– Does the film’s tone support or question this classification?

–  How important is the ‘suffering woman’ trope to Mulholland Drive and melodrama?

–  Does Chapple’s analysis on costume help to unravel some of the film’s mysteries and is this an important element of the film’s status as a melodrama?

Do join us to watch the film and take part in the post-film discussion if you can. And please note we start at 4pm.