All are very welcome to join us for the next instalment in our series of Dirk Bogarde melodramas. We will show The Singer Not the Song (1961, Roy Ward Baker, 132 mins) on Monday the 26th of November, 5-7pm, in Jarman 6. 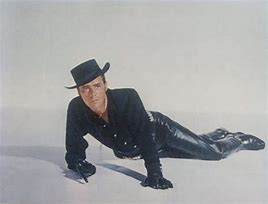 The main plotline of the film was summarised by the US trade magazine Boxoffice on the film’s releases in that country in May 1962 as follows: ‘John Mills, a Catholic priest, arrives in a small Mexican town to take over for a predecessor who had bowed to the will of Dirk Bogarde, a bandit who has the townsfolk intimated.’ (8th January 1962)

While the plot description continues, for the sake of avoiding spoilers, I’ll just add that the two men end up in a battle for the town, and the soul of local girl, Mylene Demongeot…

In terms of melodrama, at the time of the film’s UK release (in January 1961) John Cutts, in the film magazine Films and Filming, reviewed it as a ‘protracted adventure-melodrama’ (February 1961, p. 33).

Do join us, if you can, for our move into colour and adventure!

Due to the film’s length we’ll attempt to start promptly at 5pm.