What a term it’s been…and we haven’t even finished it yet! However, although term won’t finish until Friday 5 April, Special Collections will be closed over the Bank Holiday, from Thursday 28 March. We will reopen at 9.30 am on Tuesday 5 April.

Looking back on the last post I created in February, I am rather ashamed to note that I wrote it over a month ago. Many apologies for staying so out of the loop, but the time has gone so quickly that we really have had very little time to sit at our desks!

So what has been keeping us so busy? Well, our main business this term has been working with the lovely second year students of Dr. Helen Brooks’ theatre history module. We have worked on this in the past, but this year was the first time that Special Collections took such a major role in the teaching of the course. Over nine weeks, we have hosted seminars for the students and helped them to discover many of the gems in our theatre and performance archives from the Victorian and Edwardian periods. 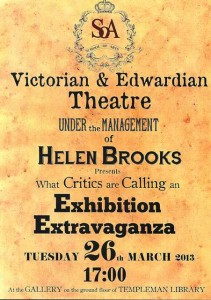 For the final assessment, the students curated an exhibition of our materials on topics of their choice, brought together under the banner of ‘A Night at the Victorian and Edwardian Theatre’. These include such diverse themes as crime, characters, theatregoing and pantomime. For the first time, this year, we’ve used the public gallery space on level 1 of the Templeman, behind the cafe, for their display. Not only was the exhibition more public than ever before – demanding such skills as framing and spraymounting – but the students were also charged with the organisation of the whole process, including linking the exhibitions into one coherent whole and organising the launch.

As ever, the students created a fascinating and visually stunning exhibition, as well as a launch event, last Tuesday, which was enjoyed by everyone who attended. This included a ten minute pantomime, written for the occassion, and some painstakingly prepared snacks of cucumber sandwiches! As the culmination of the module, it was a lovely event to celebrate the success of the term. 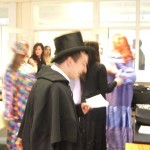 Getting ready for the panto

If you happen to be in the Templeman, do come and have a look – but the exhibition won’t end when the materials come down in May. This is because the students also created digital exhibitions, so that their work will be available to look at in years to come. Take a look at their work on the Exhibitions Page. You can also take a look at some of the earlier years’ exhibitions by following the links.

Of course, we have more excitement planned and discoveries to make before the end of term – and then beyond – so do keep an eye on the Blog for updates.

And if you’re intrigued by the sound of this module – or theatre history in general, do come along to the third in our series of annual talks, which will be given by Helen Brooks on theatre during the First World War on 23 May 2013.

For now, have a great weekend and we look forward to seeing you next week.