It’s not often I get the chance to be up-to-the-minute with Special Collections news, but this last week has seen a very exciting development.

As part of his process of ‘rationalising’ the assorted collections which the newly created Specialist Collections and Academic Archives is responsible for, Steve Holland has been investigating various donations stored in the basement of the Templeman. On Thursday 19th, he made a very exciting discovery in part of the Baldwin collection. A box marked ‘original deeds’ turned out to contain some very original deeds: fifteen indentures, the earliest from 1425, the third regnal year of Henry VI.

Thorough investigation is still underway, but so far we have encountered some documents on paper and others on parchment, some in English and some in Latin (at least one item in both) and some with seals, or parts of seals, still intact. The most impressive in terms of seals is one indenture from the reign of William and Mary, which appears to be the latest of the selection, which has 5 seals attached to the document by parchment tags.

Also included in this unassuming box were two more recent correspondences. One is from King William IV, signed William R and dated 1825; the other a short note apparently from Charles Dickens to Sir Charles Darley[?], dated 1855. These will also be investigated further.

I will post further updates as they emerge; for the moment, the transcription, identification and appropriate storage of these materials is our priority.

As a taster, here’s one of the more legible documents, in English. 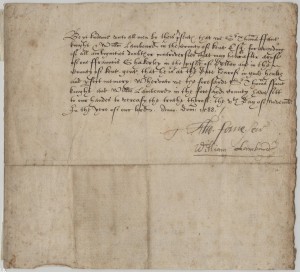 Be yt knowne unto all men by theise p[re]sent[es], that we S[ir] Thom[a]s Fane
knight [and] Will[ia]m Lambeard in the country of kent Esq[uires] for avoiding
of all ambiguities doubt[es] or controversies that may hearafter aryse
of one Franncis Shakerley in the p[ar]ishe of Dytton and in the
county of kent gent[leman], that he is at the date hearof in good health
and p[er]fect memory: Wherunto we the fore sayde S[ir] Thomas Fane
knight and Will[ia]m Lambeard in the foresaid county have sett
to our handes to vereafy the truthe thereof : the vth Day of Novemb[er]:
In the yere of our lord. Anno Dom[ini] : 1588.