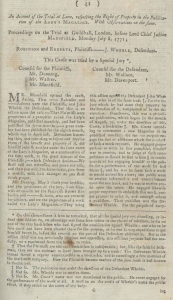 LM, I (1771). Image © Adam Matthew Digital / Birmingham Central Library. Not to be reproduced without permission.

One of the many problems involved in working with eighteenth- and nineteenth-century periodicals is not knowing for sure what you are reading. Distinguishing between original and repurposed content is easier in a digital age, but is still a very inexact science because of the sheer scope of the archives from which serial publications can be drawn. Faced with a bewildering array of multi-genre content, the doggedly determined periodical scholar (is there any other kind?) is left heavily reliant on gut instinct and old-fashioned detective skills.

Characteristically, the Lady’s Magazine does its best to keep readers off the scent. True: many articles drawn from previously published, longer works, are credited as being ‘By’ their original author or are acknowledged as extracts in their titles. But there are many other articles that appear in the magazine with no signature attached to them and no form of acknowledgement of prior appearance even though they are not originals. And there are others again that have a signature and read as though submitted by a reader for the first time when, in fact, these turn out to be, shall we say, borrowed. Whether the magazine sought deliberately to dupe its readers about such contributions or was itself simply deceived by contributors trying to pass of the work of others as their own (the editors certainly discovered authors doing this on many occasions and proudly declared so when they did) is unclear to say the least.

Trying to pursue the bigger question of how copyright law was understood to apply to eighteenth-century periodicals takes you into still murkier territory. Evidence from the magazines themselves suggests that editors and booksellers saw serial publications as working at the very margins, or even completely outside, of contemporary copyright law. Indeed, they seemed often to have operated in a culture of broad (if not unshakeable) understanding that their contents could and would be widely repurposed.

But there were limits to this understanding, and the Lady’s found itself on both sides of the copyright infringement fence. For nine years of its print run, The Lady’s  was forced to fend off the unapologetically unscrupulous efforts of publisher and rival Alexander Hogg, who, working out of 24 Paternoster Row, was the next door neighbour to George Robinson and his partners. Hogg’s New Lady’s Magazine waged an unrelentingly aggressive campaign against the Lady’s from 1786 to 1795 in a publication that Hogg claimed was more polite, better produced and better value than its predecessor and contemporary. In fact, huge swathes of the New Lady’s Magazine was plagiarised verbatim, without acknowledgement, from the Lady’s itself. Quite what Hogg and Robinson said to each other as they inevitably walked past each other in Paternoster Row intrigues me. But Robinson couldn’t claim the moral high ground all of the time. In 1819, for example, his magazine was forced to respond (not exactly apologetically) to the proprietor of Blackwood’s Edinburgh Magazine, who had complained that the Lady’s had committed an ‘invasion of [literary] property’ by printing ‘without alteration, abridgement, or acknowledgement’ a piece entitled  ‘Some Remarks on the Use of the Preternatural in Fiction’ by John Wilson, which they had printed the year before (L: Oct 1819: ‘To Our Correspondents’). 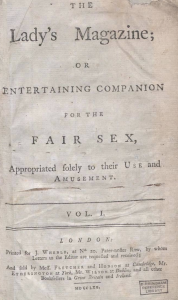 In many ways, however, the most interesting insights the Lady’s Magazine offers us into contemporary understandings of the periodical’s place in debates about piracy and plagiarism comes early in its history. When the first issue of the Lady’s Magazine appeared in August 1770 it was as a joint venture between the bookseller John Coote and publisher John Wheble. During April 1771 Coote sold his interest in the publication to the publishers George Robinson and John Roberts for 500l. Sensing that he was onto a good thing, Wheble, who had himself previously and unsuccessfully sought to buy the interest off Coote, would not give up on the Lady’s, however, and continued to publish it alongside Robinson and Roberts’ official version. The resulting dispute between Robinson and Roberts and Wheble over which Lady’s Magazine was legitimate led them to the courtroom in July 1771 in a trial that found in favour of Robinson and Roberts, who were awarded nominal damages of 5s.

A transcript of the courtroom proceedings, which was presided over by Lord Chief Justice Mansfield, appeared in full in the July 1771 issue of the magazine. It is an extraordinary document, worth every twinge of eye strain occasioned by scrutinising its densely printed text and densely argued perspectives on the thorny question of who ‘owns’ a publication that is the work of multiple hands: a proprietor, a printer, a publisher, an editor as well as engravers and numerous (and often unknown) writers. 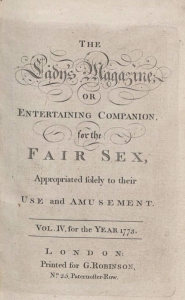 Wheble’s defence lay in the quantity of labour he claimed he had put into getting the publication off the ground. He contended that the ‘time, application and invention’ he had invested in the magazine should have been enough to prove his title to it (I, July 1771: 44). Coote unsurprisingly disagreed, arguing that he had been proprietor and legal owner of the magazine and that Wheble’s small part in proceedings had been simply to get the publication onto readers’ bookshelves: ‘After the author has wrote, the compositor has done his part, and the printer has set the press, the last hand it comes to is the publisher [… .] All he has to do with it is, upon the one hand to publish it, upon the other hand, to transmit the profits to Mr Coote’ (I: July 1771: 42).

Coote’s case was hard to dispute, but the serial form of the The Lady’s complicated matters rather. As Wheble pointed out, some significant elements of the content of the Lady’s Magazine, such as the long-running travel narrative, A Sentimental Journey (1770-77), had yet to be concluded when Robinson and Roberts took over publishing the title. This begged an important question that the trial dodged rather than resolved: What rights has a publisher over a work that is published in part form? Wheble insisted, as he would, that as publisher of the previous eight installments, he had the right to publish future parts. Coote responded by asserting that serial literature (and its authors) belonged not to a publisher but to the publication in which it appeared. Since he had sold the Lady’s Magazine to Robinson and Roberts, the unknown author of A Sentimental Journey (known only as ‘a Lady’) was duty bound to write for its new publishers.

Lord Mansfield would not be drawn on these matters of ownership. After all, Mansfield declared, ‘there is not a colour of property’ in such ‘title[s]’ (I: July 1771: 50). In arguably the most interesting sections of the transcript, Mansfield, rather than focus on the rights of publishers, proprietors or even lowly authors, looks out for the magazine’s readers. 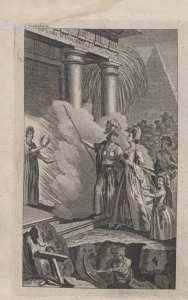 No law could prevent Wheble from continuing to publish the periodical after Coote sold his interest in it to his rivals, Mansfield declared, and indeed, Wheble ploughed on with publishing his own Lady’s Magazine alongside Robinson and Roberts version until December 1772, when it died a sudden death. But for Wheble not to acknowledge his break with Coote, for Wheble to present his Lady’s Magazine as a continuation of Coote’s original, was to dupe readers, Mansfield concluded: ‘If he had said Mr Coote has left off his work, and I will continue it, he had a right to do it; but he has gone on in a manner that has imposed upon the public, in saying No. 9. was a continuation of the original work, of which eight numbers had been sold which was a fraud’ (1: July 1771: 52)

By July 1771, it is clear that The Lady’s Magazine was an established brand that readers and subscribers bought into with every purchase. As Mr Wallace, Wheble’s solicitor, declared with undisguised irony, the case of Robinson and Roberts vs Wheble ‘got a great victory [for the booksellers], in being told they have got no property in such works’ (I: July 1771: 52). In the process, the court failed to resolve a set of questions about the periodical’s place in contemporary copyright law that would resurface throughout the long history of the Lady’s Magazine’s run. But it also worked to emphasise the rights of readers whose title to serial publications seemed in some ways more secure than those of their publishers and authors.